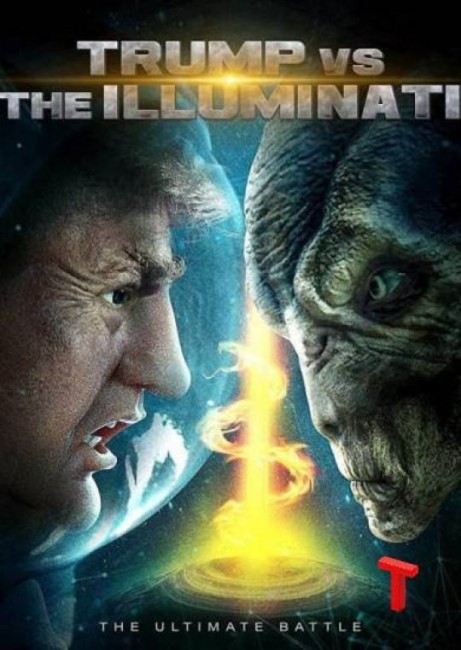 A Chinese clone of President Donald Trump escapes the destruction of the Earth in the last space shuttle following a nuclear war triggered by his donor. The shuttle crashlands on Mars where Trump survives a thousand years into the future. Alistair Crawley becomes lieutenant to the god Anubis, head of the Illuminati. The Illuminati fear a prophecy that Trump will defeat them. Trump is recruited by Queen Veruna, leader of the Atlantean army, and sent on a space mission to Hell to fight Lucifer.

I have to admit the moment I read the title I was consumed by a need to watch the film. It is one of the films that sell themselves with Deliberately Ridiculous Titles and the outlandishness of its premise made it seem highly watchable. I will also make it clear that anything that sinks its teeth into Trump already has my upvote from the outset, I will state my bias upfront – I regard Donald Trump as an utterly despicable human being. I hardly need to point out examples of the incessant lying, the corruption, his fragile egotism, the near mental derangement of his fact-free pronouncements, the racism, the courting of white supremacists. His legacy speaks for itself – children in cages, 200,000+ people dead out of negligence and incompetence. If there is a fairness that governs the universe, he should receive a jail sentence after his term in office.

The Theme Essay Real-Life People in Fiction has some notedly bizarre entries in which real-life people are cast as characters in genre fiction such as Abraham Lincoln and Billy the Kid as vampire hunters, Adolf Hitler revived as a head on a robot body, Saddam Hussein as The Devil’s lover in Hell and a zombie Osama bin Laden, among others. Among these, Trump vs the Illuminati must take the prize, featuring a clone of Donald Trump on Mars fighting The Illuminati headed by the Egyptian god Anubis with Aleister Crowley as an acolyte (that’s the way the name is pronounced although it is spelt Crawley on the credits, which could be intentional or a typo) where Trump is recruited by Atlanteans and travels through space to do battle with Satan in Hell, as well as appearances from characters from horror fiction including a descendent of Van Helsing and a Dr Jekyll.

The main problem with the film is that it has a thoroughly demented set-up that gets you sitting watching – but then has no idea what to do with any of it once the film starts. There is no real plot to anything that happens. Much of the film consists of Trump on a space journey to Hell (which would appear to be located in space) to confront The Devil. Nothing much happens along the way and the eventual confrontation ends up being flat. Moreover, the film has no real idea of satire – all there is to it is its wacky premise.

Timothy Banfield who voices the clone sort of gets Trump’s voice if you squint your ears. Having just watched the first US Presidential debate before I did Trump vs the Illuminati, what seems missing is Trump’s abrasive voice, his constant barrage of putdowns and claims of self-aggrandisement. This is also a character that seems too reasoned and reasonable in the things he does rather than the real Trump who seems to shoot from the mouth with whatever goes through his head in a random stream of thought. You could argue, as the film points out, that this is a clone but surely in that case the clone would not have Trump’s voice or accent or even his behavioural patterns.

The film has some beautiful CGI artwork depicting the various aliens, planets and planetary surfaces. On the other hand, it is also clearly limited animation – the shot of the devastated Earth’s surface is repeated several times over. The other oddity is that the film seems to almost entirely avoid showing the faces of any of the human characters. In almost all cases, figures are hidden behind helmets and visors. We get the very occasional partial glimpse of Trump’s visage beneath his spacesuit visor. One suspects the reason for this is that it allows the animators to avoid having to animate facial features and expressions in detail and coordinate mouths and vocals thus saving on their workload.

Trump vs the Illuminati comes from director known as B.C. Fourteen (his real name not known) who also writes and directs under a host of different names including Christopher Maitland, B.C. Furtney and Denise Schoolner. Fourteen has also directed the live-action horror films New Terminal Hotel (2010) and Werewolf Rising (2014), as well as the documentaries Trumpocalypse Now (2017), Uncivil War: Battle for America (2017) and Go Big or Go Home (2018). He has also written several other political documentaries and the scripts for a host of animated films including Planes With Brains (2018) and sequels. Pup Scouts (2018), Trolled (2018), Wee Dragons (2018), Penguin Rescue (2018) and Jumbo (2019), among others.