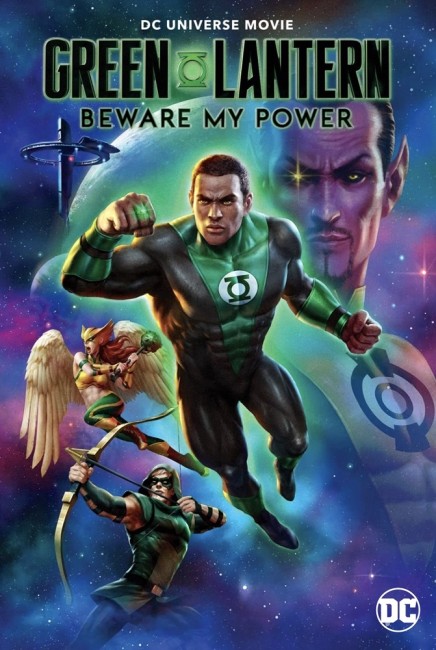 A spaceship crashes near the home of former soldier John Stewart, He races to the scene and rescues a blue-skinned alien before it dies in his arms. This is one of the Guardians of Oa who bequeaths him a ring that attaches itself to John’s finger, informing him that he has been chosen as a Green Lantern. He desires only to get rid of the ring so it takes him to the Justice League Watchtower to understand more. There he meets Green Arrow, the best friend of Hal Jordan, the previous wearer of the ring. John and Green Arrow take the Guardian’s ship to Oa to find all of the other Guardians and members of the Green Lantern Corps dead. They then encounter Hawkgirl, Shayera Hol from the planet Thanagar, who is seeking vengeance for the elimination of her people. She blames Adam Strange, a native of the planet Rann, who also turns up. Rann and Thanagar have both been at war due to a Zeta Beam that teleported Thanagar into Rann’s orbit, causing mass devastation to both planets. John, Green Arrow, Hawkgirl and Adam cross the galaxy in the Guardian’s ship, seeking the villain Sinestro, a former Green Lantern who is manipulating the wars for his own benefit.

Beware My Power tries to reset the basics for Green Lantern. On the other hand, as a long-time reader of the comic-book, you kind of balk at the way it sets about doing so. The film’s plot casually wipes out not only the Guardians of Oa but also the entire Green Lantern Corps, while turning Hal Jordan insane and into a mass murderer. It is almost as though someone came into the comic-books and decided they hated Green Lantern/Hal Jordan and wanted to burn down every single established aspect of the character and mythos and recreate their own version.

There surely seem less drastic ways of conducting a character reboot without obliterating not only the character but also everything associated with it. Certainly, this does have some precedent. During the 1990s, when DC were conducting drastic character changes in an effort to boost readership, there were the Reign of the Supermen (1993) and Emerald Twilight (1994) storylines where Coast City was eliminated and Hal went insane, conjuring a ring simulation of the city and then becoming the villain Parallax and eliminating the Guardians and Green Lantern Corps. The role of Green Lantern was subsequently inherited by Kyle Rayner, while the dead Hal Jordan went on to become the new Spectre. However, this proved an unpopular move and Hal Jordan was reinstated as Green Lantern in 2004. And it is not that previous continuity has not been erased before – when Hal Jordan became Green Lantern in 1959, all continuity to the previous incarnation Allan Scott was expunged.

The film also introduces Adam Strange, a Buck Rogers-styled character dating back to the 1950s, an Earth archaeologist who would teleport between Earth and a series of adventures on the planet Rann. Strange had earlier appeared in the DC Showcase: Adam Strange (2020) short film and in live-action in the tv series Krypton (2018-9) – although all mention of his origin as an Earthman has been dropped here and we are given the clear impression that he is a Rannian. We also get a Hawkgirl (but no Hawkman) and a drastically condensed version of the Rann-Thanagar storyline from self-titled comic-book series that ran in 2005 (one that did feature Kyle Rayner and the Green Lantern Corps but no Sinestro or Hal Jordan).

It is during these scenes and the planet-hopping action that Beware My Power is at its best as it becomes a Space Opera with human characters caught between a vast intergalactic war where sides are being manipulated by unknown forces. It’s just when the film tries to tie in comic-book continuity, you are left with a bad taste in the mouth.