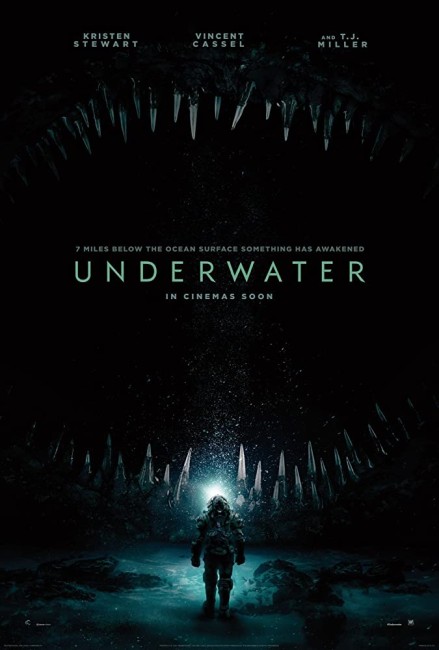 Kepler Station, a drilling platform located 36,000 feet down on the floor of the Marianas Trench, is struck by a sudden tremor. Norah Price locks the ruptured sections off and drags a handful of survivors to safety. With them trapped there, the station’s captain Lucien proposes a plan to make an escape by descending in an elevator cage and then conducting a one mile walk across the ocean floor in pressurised diving suits – a feat that has never been conducted before – to get to the partially complete Roebuck Station so they can use its escape pods. They set out on the journey but this is fraught with peril, not the least of which is that the drilling has disturbed a monster from the depths.

Underwater was the third film for William Eubank, a former cinematographer who made his directorial debut with Love (2011) about an astronaut stranded in orbit. Eubank caught my attention was his second directorial outing The Signal (2014), a film that initially seems to be about alien abductees but then really starts to screw with an audience. It showed promising things.

Underwater was made on a $65 million budget and looks a lot more than that on screen. Unfortunately, it ended up a victim of bad timing. It was shot in 2017 but in March of 2019 distributor 20th Century Fox was acquired by Disney. Disney had no apparent interest in the film and dumped it in January of 2020 (the winter season in the northern hemisphere, the traditional dead zone for theatrical attendance where films that are seen as having no prospects usually end up being shuffled). There it did reasonable box-office ($40 million) but failed to recoup its budget. It also had the distinction of being the last film to go out under the 20th Century Fox banner head after Disney rebranded the company as 20th Century Studios in a desire to distance themselves from the toxic political partisanship of Fox News.

Underwater harkens back to a certain film made in the late 1980s. This was the time that James Cameron’s epic underwater film The Abyss (1989) came out. In anticipation of this, a host of other underwater-set films jumped aboard the bandwagon with the likes of Deepstar Six (1989), Leviathan (1989), Lords of the Deep (1989) and The Rift (1990), as well as the subsequent Michael Crichton film Sphere (1998). Both The Abyss and Sphere took on issues of alien contact on the ocean floor, whereas the others were underwater monster movies.

James Cameron is a deep-sea diving enthusiast, having made several documentaries on the subject. As a result, The Abyss was made with a rigorous conviction in terms of depicting survival in an underwater environment. (It is also as worth noting that Cameron holds the record as the second ever person to visit the Challenger Deep, the deepest point in the ocean in the Marianas Trench, doing so in a specially constructed vessel Deepstar Challenger in 2012). Underwater fails to have such scientific rigour – my big point of contention was seeing people going out in diving suits at a point in the ocean where there would be the equivalent of 15.75 pounds per square inch of pressure (the equivalent of 7.5 tons) pressing down on them.

Pared down to it, the script for Underwater is no more than a shuffling around of the essential plot elements of any of the above films – the crew of a station on the ocean floor at depths nobody has descended to before; creatures from the deep that have been stirred and are attacking/invading the station; connection with the surface lost; a perilous journey in order to make an escape. The monsters are so generic that nothing at all is explained about where they come from – not even the usual explanation of they being stirred up by underwater drilling (although William Eubank did make the interesting claim in publicity that he had intended them to resemble H.P. Lovecraft’s Cthulhu).

On the other hand, Underwater is an intense ride. It starts in from the opening scenes with Kristen Stewart fleeing as corridors of the habitat start imploding and continues as captain Vincent Cassel outlines a seemingly suicidal mission to take a freight elevator to the depths and walk across the ocean floor in diving suits in total darkness. The scenes are filled with a great deal of urgency and bustle. The interiors are all crowded bulkheads and hatches or rooms filled sparking and flickering computer monitors, while the cast spend all their time covered in sweat and dirt. The scenes with the crew getting into bulky, armoured diving suits makes them resemble Transformers. And when they are finally outfitted and start their descent, there is the jolt where Mamoudou Athie’s helmet cracks under pressure and his head abruptly explodes in a gout of blood as an ominous warning of the perils ahead.

The journey is an intensely claustrophobic one through imploded corridors, narrow crawlspaces between fallen debris and across the ocean floor lit only by the lamps of the suits, and with pieces of vast machinery often exploding and collapsing around them. The whole film has the feel of not just a rollercoaster ride but one that is taking place in a tightly constricted space. When William Eubank throws his punches and has a crewmember abruptly snatched or a tentacle appear out of nowhere, you jump out of your seats because the oppressiveness of the atmosphere and constant driving tension has placed you so much on edge.