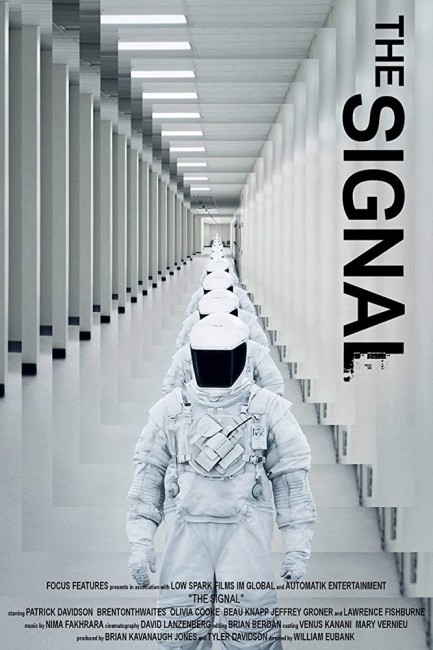 Nic is driving across country with his girlfriend Haley as she moves to California. They have been joined by Nic’s best friend Jonah, a fellow student at MIT. Nic is slowly losing the use of his legs and has to walk on crutches. Nic and Jonah are tracking Nomad, a hacker who has broken into the mainframes at MIT. As they travel, Nomad taunts them by sending pictures and video of where they are. They trace Nomad to a house in the desert. As they go to investigate the house, something happens and Haley is abducted from the car. Nic comes around to find that he is being held in a biological containment facility where he is questioned by scientists about possible alien contact. Nic finds Haley is in a coma and then discovers that his own legs have been replaced by prostheses of alien origin. As he attempts to make an escape from the facility, he becomes aware that everything is not as it seems.

The Signal – not to be confused with the fine mass insanity outbreak horror film The Signal (2007) – gained good word of mouth at its premiere at Sundance. It was snapped up for what was initially promised as widespread distribution, although this eventually transpired as a limited theatrical release. Director William Eubank had previously made the less well-known science-fiction film Love (2011) about an astronaut stranded in orbit and subsequently went on to make a further SF film Underwater (2020), followed by Paranormal Activity: Next of Kin (2021).

For a good half-hour in, The Signal is a slow burner. The crippled Brenton Thwaites, his girlfriend Olivia Cooke and best friend Beau Knapp are on a cross-country journey on the trail of an uber-hacker who taunts them by sending them pics and video of where they are. They trace him to a remote house, something unclear happens.

Thwaites then wakes up in what appears to be a US government biological containment facility where he is being questioned by people, in particular Laurence Fishburne, who are inside hazmat suits. The questions keep disconcertingly coming back to ones about alien abduction. Thwaites talks to his friend Beau Knapp through the ventilation grill, although Knapp seems disoriented and confused, insisting that he has no legs. Thwaites then finds his girlfriend Olivia Cooke in a coma and tries to escape with her – but because he is wheelchair-ridden, this means towing the bed she is on behind his chair all the while trying to hide from people in the hallways.

At this point, The Signal seems to be heading towards somewhere between The Andromeda Strain (1971) and an alien abduction drama. However, things start to get weird. [PLOT SPOILERS] There is the supremely uncanny moment where Laurence Fishburne informs Brenton Thwaites that the friend he has been talking to through the grill only exists inside his own head. Things become completely bizarre after Brenton Thwaites is recaptured from his escape attempt, is placed in a hospital bed and falls out to reveal that both of his legs have been replaced by gleaming angular metal prostheses of what we are later told is alien design.

From this point onwards, The Signal becomes a film that is constantly, unexpectedly pulling the carpet from beneath the audience where the sense of reality and everything that is happening is constantly being thrown on its head. Brenton Thwaites and Olivia Cooke make an escape from the facility and through the town in a semi-trailer, only to discover that the highway abruptly ends at a vast artificial canyon around the town. It gets even weirder when, during their escape, they are picked up by kooky Lin Shaye who talks about angels coming down from above, before she is apprehended and questioned by Laurence Fishburne, seems to get caught in a feedback loop during the questioning and starts leaking purple goo from her ear before he opens a steel briefcase and pulls out a gun presumably to eliminate her.

[PLOT SPOILERS] The final revelations about who we are dealing with, who we think the authorities are and where everything is located is waaaaay out there. It turns what we start out thinking is a film about returned alien abductees into some completely bizarre variant on Dark City (1998).

[PLOT SPOILERS CONTINUE] The main problem with the end revelation is that it shows we have a film constructed more in terms of a series of wild head-turning spins than any strong underlying rationale for why things are happening. The end leaves us with a host of unanswered questions – who are the abductors? What is the purpose of placing people into a simulation where they are led to believe they have been abducted by aliens? Why did Nomad lead these people in particular on a chase and then abduct and alter them? Who or what are all the other people in the simulation?