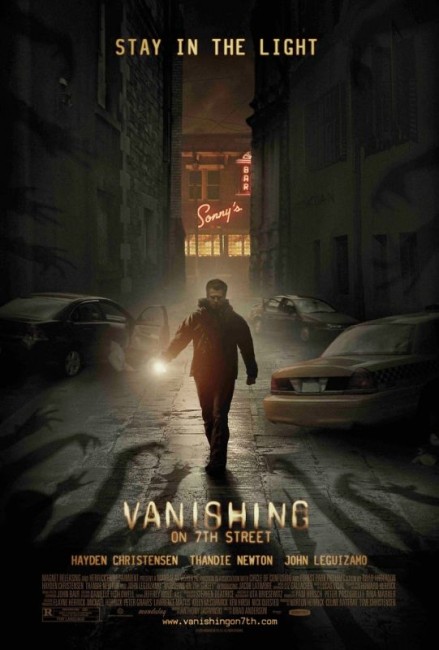 Detroit is affected by a mysterious power cut. When the lights come back on, everybody has vanished, leaving behind empty clothes. A handful of survivors – Paul, a projectionist at a multiplex; Rosemary, a physical therapist at the public hospital; and tv news reporter Luke – remain behind. They encounter sporadic survivors but also see that the shadows are moving, causing the others to abruptly vanish too. All three come together at a bar on 7th Street that is tended by twelve-year-old James as he waits for his mother to return. Light is the only way to keep the shadows from advancing. However, the shadows are draining all power, including the torch batteries they use, reducing the city to night even during the day. The bar is kept alight by a fuel-powered generator in the basement but this too is starting to fail. The four of them try to puzzle out what is happening and keep the shadows from advancing.

I have believed for several years now that Brad Anderson is one of the best under-the-radar directors of genre material out there. Anderson first appeared with the 50 minute Frankenstein’s Planet of Monsters (1995) and the non-genre indie films The Darien Gap (1995) and Next Stop Wonderland (1998). Anderson then made the delightful time travel romance Happy Accidents (2000) and found modest acclaim with the psycho-thriller Session 9 (2001) and the arthouse hit of The Machinist (2004). Anderson has also made the non-genre thriller Transsiberian (2008) in between a number of episodes of tv series such as The Wire (2002-8) and Fringe (2008-13). All of these are solid dramatic films with intelligent screenplays and show Brad Anderson with a more than worthy ability to choose good casts not for star power but for their ability to venture inside their characters. Subsequent to this, he made the 911 call psycho-thriller The Call (2013) and the asylum horror Eliza Graves/Stonehearst Asylum (2014).

Vanishing on 7th Street is a Last People on Earth drama. There have been various variations on this theme, all the way from Five (1951), Day the World Ended (1955), The World, The Flesh and the Devil (1958), Where Have All the People Gone (1974) and Virus (1980) to I Am Legend (2007) and the tv likes of Survivors (1975-7) and The Stand (1994). The variant that Vanishing on 7th Street most resembles is The Quiet Earth (1985), which featured three people left alive in the aftermath of a mysterious unexplained catastrophe that was slowly causing them to phase-shift out of existence. Another recent comparison can be found with the South Korean The End of the Animal (2010), which similarly had people trying to find help in the aftermath of an unexplained catastrophe in between visitations from an enigmatic godlike stranger and mysterious never-seen creatures that were causing them to disappear. As with both The Quiet Earth and The End of the Animal, the nature of the catastrophic events here are left deliberately unexplained. There was also the low-budget The Blackout (2009) about creatures the drain light and lurk in the darkness.

Brad Anderson creates a great opening that quickly propels Vanishing on 7th Street to become one of the most effective of these Last People on Earth dramas. He introduces the three principals – firstly John Leguizamo at work as a projectionist in a multiplex as the power goes out and comes back on for him to find that the theatre below him is empty of bodies, just people’s clothing lying in the seats and strewn about the concourse, where the only other person he meets is a security guard who heads off into the dark to investigate something he thinks he sees only for the power to go out again leaving an empty heap of clothing and the guard’s flashlight rolling back towards Leguizamo.

We next meet Thandie Newton wandering through a similarly deserted hospital, before encountering the wonderfully ick image of a man left on an operating table in the middle of surgery with his stomach held open with retractors, before another power cut and he too vanishes. Thirdly, we meet Hayden Christensen as he wakes in his apartment, his girlfriend having failed to come and spend a planned romantic night, he cursing that the power is out as he is forced to walk down to the ground floor where he picks up the morning paper and walks out onto the street, not noticing the empty clothes all around him until he crunches on a pair of fallen glasses and turns around to look, while in the background unseen by him a plane falls from the sky and explodes. There is a sense of haunting mystery in these scenes that easily outstrips something like 28 Days Later (2002) and its heavy reliance on the cliches of the genre.

Brad Anderson conducts the film with an admirable economy, largely confining it to a bar, its basement and a couple of blocks of street, which are all lit in heavy shadow, as well as one or two judiciously sparing effects shots of the deserted city. Within this, Anderson creates an intensely paranoid mood. With the shadows constantly on the edge of the frame and creeping up around the characters as the lights keep failing on them, he in fact does a far better job of depicting the last people on Earth at siege from a threat beyond their doors than any of the film versions of Richard Matheson’s I Am Legend (1954) – see the films The Last Man on Earth (1964), The Omega Man (1971) and I Am Legend – which somehow missed the essence of the story’s mood about a man at siege from hordes of vampires beyond his door.

One of the most fascinating aspects of Vanishing on 7th Street is how [PLOT SPOILERS] the film reaches an end where Brad Anderson gives us no explanation whatsoever for the catastrophe, what the shadows are or why some people have been spared. There are at best mysterious half-hints. I was intrigued by the scene where the ailing John Leguizamo is being tended by Jacob Latimore and wakes to see that Latimore has disappeared and gets up to discover a tunnel beneath the bar, which he enters only to be overcome by the shadows, before the scene suddenly reverses as we see that Jacob Latimore is alive and well and it is John Leguizamo who has vanished. This intriguingly suggests that there is some subjective component to the disappearances, that people are perhaps being stolen away from their shared attachment to the world. After all, the rallying cry throughout seems the vainly hopeful declaration that “I am real.” There is an equally enigmatic ending where Jacob Latimore survives the attack, the young girl (Taylor Groothuis) enters the church to find him there and they exit the city on a horse together, passing on their way what appear to be the shadows of Christensen, Leguizamo and Newton against the outside wall of the bar still whispering “I am real.”

There is also the attempt to link what is happening to the famous never-explained disappearance of the colony in Roanoke, Virginia circa 1590. The phrase ‘Croatoan’, which was cryptically left written on a fencepost in Roanoke, is also seen painted on the side of an overpass here at one point. John Leguizamo’s character does make the erroneous claim that the term Croatoan was something that never had a meaning in any language – where in fact it was the name of a nearby island that it was believed that the settlers might have abandoned the encampment for, while there was also the name of a nearby Indian tribe known as the Croatan.

All of the principals give fine performances, standout being Hayden Christensen who seems determined to make up for the widely ridiculed showing he gave in the Star Wars prequels. John Leguizamo again proves himself as one of the most underrated actors out there, while young Jacob Latimore gives a fearful yet resilient performance that shows he has much potential ahead of him.