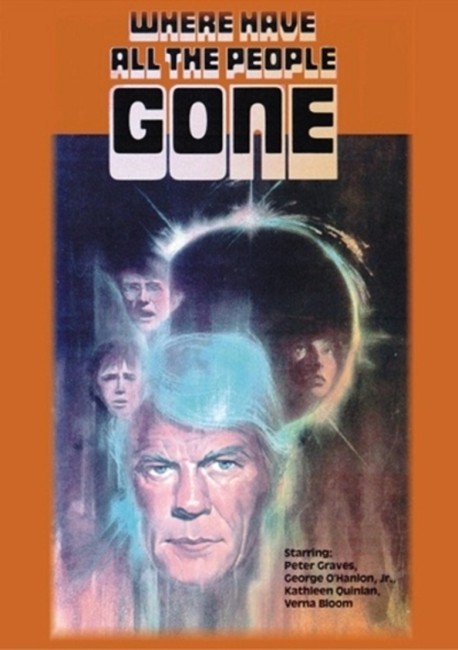 Steven Anders and his family are camping in the High Sierras, along with their friend Jim Clancy. Steven’s wife Barbara leaves to return home. Steven and the two teenage children David and Deborah are in a cave when there is a flash in the sky followed by an earth tremor. David believes it could have been a nuclear attack. Clancy, who was exposed to the flash, falls ill. With the vehicle dead, they decide to carry Clancy back to the nearby town of Rainbow on foot. However, he dies en route and when they turn moments later his clothes lie empty and his body has turned to white powder. Arriving in Rainbow, they find the town deserted and empty clothes everywhere. As they journey along the deserted roads towards Los Angeles, they encounter sporadic survivors. Two others join them but the situation has left some trigger-happy, while there is also danger presented by feral dogs. All the while, Steven lives in the hope that he can find Barbara still alive.

Where Have All the People Gone is an interesting curiosity from the era of 1970s tv movies. It’s hard to tell if it was intended as a self-contained entity or else as a pilot for a series that never sold – certainly, the conclusion of the film is open-ended in a way that you could have seen it becoming an ongoing work about the attempt to unite society in the aftermath of the catastrophe along the lines of something like the fine subsequent UK tv series Survivors (1975-7).

The film is a venture into the Last People on Earth theme. This was popular in the nuclear war films that came out in the 1950s – see the likes of Five (1951), Day the World Ended (1955), The World, The Flesh and the Devil (1958) and Last Woman on Earth (1960). Where Have All the People Gone drops the nuclear war theme – after toying with it as a possible explanation for a time – and becomes the first of the Mysterious Catastrophe films in which an event of unexplained origin clears the Earth out of people. In particular, it feels as though Where Have All the People Gone had a strong influence over The Quiet Earth (1985), which had a very similar plot about half-dozen people inhabiting an entire country and everyone else having disappeared, leaving behind empty clothes. See also the subsequent likes of Vanishing on 7th Street (2010), the South Korean The End of the Animal (2010), The Last Seven (2010), the Hong Kong film The Midnight After (2014), Bokeh (2017) and Alone (2017).

Even though the eventual explanation is highly dubious from a scientific perspective, the script creates an interesting mystery as the group try to determine what has happened. The script defies the cliches that subsequently set into the post-holocaust genre, such as having people formed into armed encampments and fighting against those who have set up military rule and/or are determined to own the wasteland.

What we have here often feels like the extremist views of the nuclear survivalist drama Panic in Year Zero (1962) having been turned on their head. Peter Graves radiates a trustworthy certainty and disagrees with his hot-headed son (George O’Hanlon, Jr.)’s more trigger-happy ways. There are a couple of strong and effectively written scenes that seem notedly intended to counteract the militarist view – one where the shotgun wielder determined to drive people off their property is revealed to just be a scared kid (Michael James Wixted); another where Peter Graves pulls a gun on somebody trying to steal their car and it ends in peaceful resolution rather than someone dead.

The film comes written by a duo of names with some interesting genre credits. Lewis John Carlino also wrote the scripts for the fine John Frankenheimer rejuvenation film Seconds (1966), the psycho-thriller A Reflection of Fear (1971), the faith healer film Resurrection (1980) and the Mary Shelley-Lord Byron drama Haunted Summer (1988), as well as directed The Sailor Who Fell from Grace with the Sea (1976). Sandor Stern wrote the nuclear war tv movie Red Alert (1977) and the original The Amityville Horror (1979), as well as directed Amityville: The Evil Escapes (1989), the sinister anatomical dummy film Pin (1988) and the cloning tv movie Duplicates (1992).