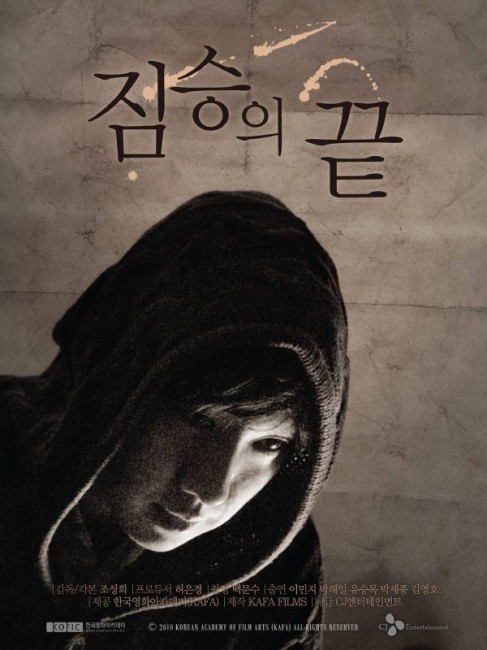 aka End of Animal

The pregnant Soon-young is travelling by taxi from Seoul to her mother’s place in rural Taeryung when they stop to pick up a hitchhiker. The hitchhiker demonstrates uncanny knowledge of both her and the driver’s secrets. He tells them that within a matter of minutes there is going to be a disaster. This strikes and Soon-young blacks out and comes around alone. She finds that electrical devices will now no longer work. She sets out to find the taxi driver who has gone to the nearby rest stop to get help. Along the way, she encounters others, including a young boy, a stranded couple and a local man. In the course of her journey, each of the others reveal not always pleasant intentions. At the same time, mysterious never-seen creatures are prowling the area and possibly killing those that wander off on their own. The stranger remains in contact with Soon-young by radio, having an extraordinary awareness into what she is thinking and giving her warnings of things that are about to happen..

Sometimes at film festivals, you end up taking a bet on something wholly unknown – in the case of The End of the Animal because it fell within genre guidelines. This can fall either of two ways but sometimes (as here), it ends up being an unexpected surprise. Doubly so in the case of The End of the Animal (or End of Animal according to the end credits and program notes) where the film appeared to have not even had any play outside of South Korea before its screening here at the Vancouver International Film Festival. It is a debut feature for young Korean filmmaker Jo Sung-Hee who made the project with a graduate grant from the Korean Academy of Film Arts.

It is hard to get a grasp where The End of the Animal is going at the outset. The heroine is taking a taxi ride home to her mother when they pick up a mysterious hitchhiker who proves threatening, demanding that she loan him the money for his fare. In between this, the stranger starts counting off the seconds until something happens. He demonstrates uncanny insight into both her and the taxi driver’s secrets, in particular knowing that the taxi driver had sex with an underage girl and that this caused the split-up of his marriage. He then tells the heroine that a disaster is going to happen but that she will be okay. As this happens (something to do with emissions from the sun, nothing of which is ever depicted), she blacks out and comes around with the taxi pulled over on a bare plain and no electricals working. It is an immediately captivating opening – one of the more unusual seen in a film in some time, something that throws the everyday into the bewildering and alien.

Most of the film falls into the category of stories about how people confront the collapse of civilised order. In this regard, the film that The End of the Animal perhaps most resembles is David Koepp’s underrated The Trigger Effect (1996) about the prejudices and fears that come to the fore after a mysterious (and also never explained) power-cut affects society. Jo Sung-Hee never goes as far as David Koepp did in seeing everybody bared in fear but all the supplementary characters come with sinister undertones – the schoolboy who boasts about being a bully; the taxi driver who had sex with a sixteen year-old girl and seems more concerned with returning for the heroine than finding out how his estranged wife living nearby is; the couple they encounter where the man mysteriously vanishes after returning for the heroine’s cellphone and the female companion insistently demands that the passive heroine give her her shoes, followed by her cellphone, money and purse; and especially the local on a bicycle who takes the heroine to the rest stop but detours to his place and comes onto her, pleading that he has never had much sex in his life. Jo Sung-Hee stated that he wanted to craft these scenes in a way that showed that everybody’s motivations were neither good nor evil.

The most intriguing aspect of The End of the Animal is how Jo Sung-Hee leaves everything, including the nature of the disaster, enigmatically unexplained. This throws The End of the Animal into the same category as other catastrophe films such as The Falls (1980), The Quiet Earth (1985), The Trigger Effect, Last Night (1998), Vanishing on 7th Street (2010), The Midnight After (2014), Alone (2017) and Bokeh (2017) that remove what happened from the story. Part of this is that Jo Sung-Hee was operating on a slim budgetary grant from KAFA so did not have the wherewithal to compete with Roland Emmerich and Michael Bay in depicting the spectacle of the end of the world – the entire film is shot digital and takes place in a bared piece of countryside with no special effects.

The greater intent though is to create an intensely mysterious film where nothing that happens is clear or spelled out. Somehow the catastrophe has also served to unleash monsters, which are heard snarling as they prowl through the area but are never shown apart from one brief scene where some white creature is partially seen as it creeps up on the seated heroine, a scene so brief and unusual you think you almost imagined it. People leave the group and are never seen again with only a shoe and more sinisterly a hand found but it never explained what happened to them.

Most of all, it is not clear who the stranger is – how he has uncanny insights into people’s darkest secrets, comes to be privy to the things that the heroine is thinking or how he is aware of what is about to happen and regularly calls the heroine with warnings (most of which she ignores). Or even how his features are mysteriously shaded from us, hidden either by a baseball cap or with him facing away from us. One of the most fascinatingly mysterious aspects of the film is the flashback scene set in a cafe where he draws a diagram of the tables and people present and then asks another patron to draw a series of ladders between them, which come together to point to the heroine who is working as a waitress whereupon the stranger gets up and follows her.

This wilful vagueness about what is happening can be frustrating in a film but proves intensely fascinating here. It is something that at once makes Jo Sung-Hee an inheritor of the tradition of directors such as Andrei Tarkovsky – The End of the Animal sits very much in the same territory as Tarkovsky works like Solaris (1972) and Stalker (1979), which are science-fiction works with a heavy emphasis on enigma and mystery – and the predestination preoccupations of M. Night Shyamalan in his better days – in particular there seems something of the slowly unveiling mystery catastrophes of Signs (2002) and The Happening (2008). That is fairly good company for a complete newcomer. Above all, The End of the Animal leaves one with an enormous interest in seeing what it is that Jo Sung-Hee would be capable of doing with a proper budget and a professional cast available to him.

Jo Sung-Hee next went onto make the more mainstream and better budgeted A Werewolf Boy (2012), followed by the hard-boiled detective thriller The Phantom Detective (2016), which sounds like it should be a genre film but isn’t, as well as to write the script for Killer Toon (2013), a horror film about murders that follow a cartoonist’s drawings.