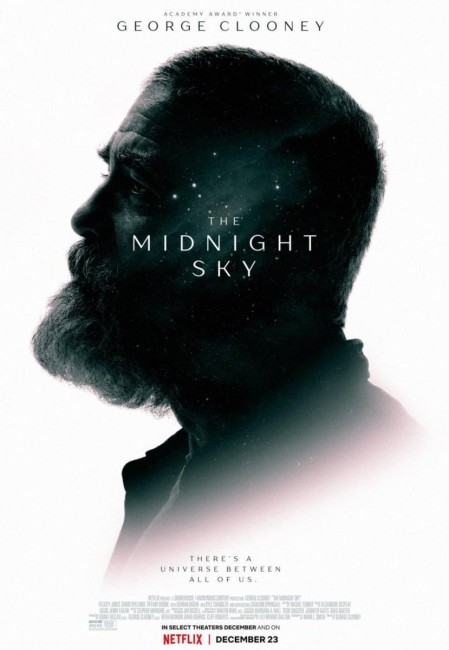 The year 2049. The Earth has suffered an extinction catastrophe. Augustine Lofthaus, an ailing scientist on kidney dialysis, has chosen to stay behind at the still unaffected Barbeau Arctic base while all the other personnel are evacuated to survival shelters. He then discovers that a young girl, the mute Iris, has been left behind during the evacuation. A slow friendship grows between the two of them. At the same time, Augustine attempts to make contact with the spaceship Aether, a mission to explore K23, a habitable moon of Jupiter. As the crew of Aether make their return journey, the communications officer Sully wonders why contact with Earth have suddenly gone dead. Augustine realises that the radio equipment at Barbeau is not strong enough to reach Aether and so makes the decision to trek to Lake Hazen, a weather station closer to the Arctic Circle that has more powerful equipment. He and Iris set out, although the journey is fraught with the dangers of wolves, blizzards and a collapsing icepack. When contact is established, it is immediately broken as the Aether is damaged by the necessity of their having to take a course through a debris-filled area of uncharted space.

George Clooney starred as Sandra Bullock’s companion astronaut in Gravity (2013) and before that had also ventured into space in Solaris (2002). Gravity proved a massive audience and critical hit. Crucially, it inspired a spate of space movies that were focused around realistic and scientifically grounded portrayals of NASA and the Space Program. These have included Ridley Scott’s The Martian (2015), which proved almost as big a success, and other works such as Europa Report (2013), Approaching the Unknown (2016), Life (2017), The Space Between Us (2017), Ad Astra (2019), Stowaway (2021) and on the tv screens The Expanse (tv series, 2015-22), The First (2018), Away (2020) and the National Geographic channel docudrama series Mars (2016-8), as well as real-life based films such as Salyut 7 (2017) and First Man (2018).

Aside from his accomplishments as an actor, George Clooney has proven a formidable director in his own right with films like Confessions of a Dangerous Mind (2002), Good Night, and Good Luck. (2005), Leatherheads (2008), The Monuments Men (2014) and Suburbicon (2017). I, in particular, have a liking for the splendidly deranged and mind-bending Confessions of a Dangerous Mind, while Suburbicon was a gripping thriller and exposure of 1950s divisions. There’s almost the thinking behind The Midnight Sky that if Alfonso Cuaron can do it, so can Clooney. Clooney adapts Good Morning, Midnight (2016), a novel by Lily Brooks-Dalton.

Plotwise, The Midnight Sky has a number of similarities to the recent 3022 (2019) in which the crew of a space station in the midst of the Solar System survive the destruction of the Earth. The main difference is that while all of 3022 was set entirely aboard the space station, The Midnight Sky has parallel stories – one following the crew aboard the ship, the other focused on two survivors back on Earth as both try to communicate with the other. The Midnight Sky is also a much more optimistic and upbeat film than 3022, which seemed only concerned with the mental disintegration and in-fighting among the survivors.

Clooney conducts the realistically grounded space mission thing with mixed effect. Crucially, The Midnight Sky is not as scrupulous about its science as either Gravity or The Martian. In regard to the idea of a habitable exo-planet orbiting Jupiter, the film seems unaware that the term ‘exo-planet’ specifically refers to planets orbiting a star other than the Sun. Furthermore, Jupiter is so far from the Sun that average temperatures would be well below zero. Not to mention that Jupiter emits massive amounts of radiation such that only a few hours/days of exposure would be fatal. Also the idea of colonising a world orbiting Jupiter with only two people, which include a woman who is pregnant, makes no sense – unless the family members resort to in-breeding and the risk of genetic pollution that come with it, this would surely be something doomed to the lifetime of the people who make the journey.

There are other scientific bits that seem wrong or improbable – instantaneous communication between Clooney and the astronauts (it is not exactly clear where in the Solar System the ship is but it takes between 33-53 minutes for a message to reach Jupiter, double that for a return message); heavy debris fields in the Solar System (unlikely unless maybe they are in the path of a recent comet otherwise you are counting the number of molecules per cubic metre). Even the spaceship feels less like a sleek vehicle of discovery than something where everyone involved had their turn attaching something to it without concern for overall aesthetics. Certainly, Clooney does get a number of details right – I was impressed to see him showing the astronauts climbing the ladder between rotating sections of the ship and having a zero g spot in the middle.

Unlike Gravity and The Martian, The Midnight Sky’s plot is not driven by pieces of drama where the solution comes through the protagonists solving engineering and science problems. Rather what we have are simply stock dramatic situations that have been boiler-plated on – attacking wolves, a hut on a collapsing icepack and Clooney lost in a blizzard, the ship’s traversal of the debris field and the necessity of a perilous EVA mission. The latter is the only scene that does find these science-driven dramatics where we watch first a few droplets of zero g blood floating up into Tiffany Boone’s helmet, the race to get her back to the airlock and then the explosion of gouts of blood with the decompression.

The surprise about the film is that while much of the science-fiction elements read like a wannabe Gravity that hasn’t tried very hard to do its homework, the triumphs of the film come in the places you least expect, namely they are emotional ones. The most winning parts of the film are the early scenes with George Clooney befriending young, mute Caoilinn Springall and the slow, tender friendship that grows between a gruff, closed-off man and the waif. The disappointment of the film is that these scenes drop off and are largely forgotten as the dramatics of their journey north take over.

The other lovely piece is the ending [PLOT SPOILERS], which unites the flashback scenes (where Ethan Peck does a fine job of playing a young George Clooney and imitating his mannerisms so much so that we know it is the same character without even being told). The film is ultimately the story of a man who has shut out the world finding closure in the connections he makes (both genetic daughter and the one he figuratively adopts throughout are symbolically called Iris). This is something that the film brings together very nicely.