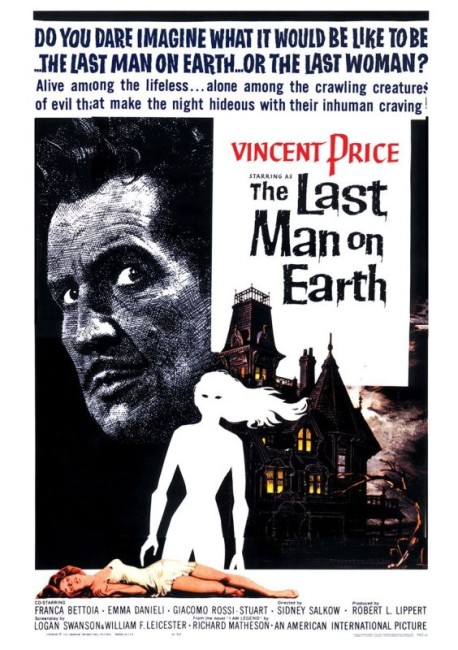 Robert Morgan is the last man left alive on Earth. He shelters in his house, while each night the remnants of humanity, who have been transformed into vampires by a plague, gather outside, calling for his blood. He manages to keep them at bay using mirrors and garlic. By day, Morgan combs the deserted city, staking the vampires and trying to eliminate their numbers.

Richard Matheson’s I Am Legend (1954) is one of the classic genre novels, a post-holocaust vampire story that straddles a line between science-fiction and horror. It is the best known work of author/screenwriter Richard Matheson – George Romero even cited it as one of the prime influences on Night of the Living Dead (1968).

I Am Legend has proven popular as a film project. Hammer Films planned a production in 1957 entitled Night Creatures with a script from Richard Matheson, although that never came about due to the British censorship board stating that the film as written would have to be banned in England. This Italian-American co-production was based on the Hammer script but was rewritten by William F. Leicester, a writer whose only other work had been in tv Westerns of the era. Unhappy with the finished product, Richard Matheson substituted the pseudonym Logan Swanson on the script. The Last Man on Earth is generally regarded as an unsatisfactory adaptation of the novel.

The book was later remade as The Omega Man (1971) with Charlton Heston, although this was even less satisfactory and eliminated all reference to vampires, instead substituting mutants. Another planned adaptation was tossed around circa 1973-5 and in the 1990s Ridley Scott planned a big-budget production with Arnold Schwarzenegger, although neither of these ever emerged. This latter version passed through several scripts and directorial hands before finally emerging as I Am Legend (2007) directed by Francis Lawrence and starring Will Smith, which disappointingly threw the book out and simply remade The Omega Man. There was also an unofficial rip-off of that film with The Asylum’s I Am Omega (2007).

The Last Man on Earth is certainly a much more faithful version of the book than either The Omega Man and I Am Legend were. The hero does get a surname change. He also becomes a biochemist (a facet that has been retained by all the subsequent film versions) who creates a cure for the plague. This dispenses with the substantial scenes in the book where Neville spends much time searching for a scientific cause of the vampire virus. We also get the only screen appearance of the vampire leader Ben Cortman – in The Omega Man, this character is rewritten with Anthony Zerbe as the cult leader Matthias and is dispensed with altogether by the time of the 2007 film.

This film follows the path of the book reasonably closely and covers it on most points. However, many scenes from the book while present are lacking in the impact they had on the page. There is the scene where Neville/Morgan befriends a dog but it has none of the emotionally wrenching effect it did in the book where Neville, desperate for companionship of any kind, cautiously encourages the dog out from hiding and takes it home, only for it to die.

The character of Ruth has been changed somewhat. She is still as a lure sent by the new breed of vampires but here there is a new element introduced where Neville/Morgan creates an antidote that will cure her people using the immunity in his blood. (This is something that became successively more prominent plot points in both The Omega Man and I Am Legend).

All of the film versions are stuck with the inherently uncinematic problem that the book presents – that there is only one character on screen for around 80% of the running time with no other people to react to. All of the films get around the problem the same way – by creating extended flashbacks to the beginnings of the plague. In these scenes, we get the new character of Neville/Morgan’s daughter and the big drama about him not wanting to burn her body.

The Last Man on Earth has some occasional moments of interest, certainly more than it has been credited for. There is an effectiveness to the ritual that Vincent Price goes through in the opening scenes – replacing the garlic and mirrors around the house, sharpening stakes on a wood lathe, refurbishing his supply of garlic out of the walk-in freezer of a department store, then staking various vampires throughout the city, returning home and taking a nap before his alarm goes off and getting up to see the vampires gathered outside calling “come out, come out”. It is a near perfect adaptation of the essence of the opening scenes of the book.

The film also preserves the book’s remarkable end twist metaphor intact (the only film version to do so) – the dazzling reversal where Vincent Price goes from vampire hunter to be seen by the new breed of vampires as a monster in the same way as he perceives them, the ‘legend’ of the book’s title, comes with a stunning clarity. Here at least, Richard Matheson has no reason to be ashamed of the adaptation.

What nearly kills The Last Man on Earth is Sidney Salkow’s dull direction. The vampires seem a weak threat – Vincent Price can defeat a dozen or more of them at once and unarmed. The house looks very flimsy with holes showing through the boards that could easily be penetrated. The film does have undeniable atmosphere and moodiness during the outdoor locations (shot in Rome), which is aided a great deal by the black-and-white photography. On the other hand, none of this takes us inside the character’s loneliness and internal struggle. There is none of the paranoid sense that comes in the book of a man isolated and alone, hounded nightly by their taunts for him to come out to them.

Vincent Price is also badly miscast. While he was a popular horror actor in the 1960s when the film was made, Price’s fruity overwrought hand wringing is not suited to the part – what the film needed was a much more realist, more ordinary actor. Neville is an internal role with almost no dialogue, is a character driven by loneliness, not something suited to Price’s very theatrical form of anguish.

Director Sidney Salkow had been directing since the 1930s. He made over 40 films, almost all Westerns and a few thrillers, and most B-budgeted. His one other venture into genre material was the horror anthology Twice-Told Tales (1963), also starring Vincent Price.