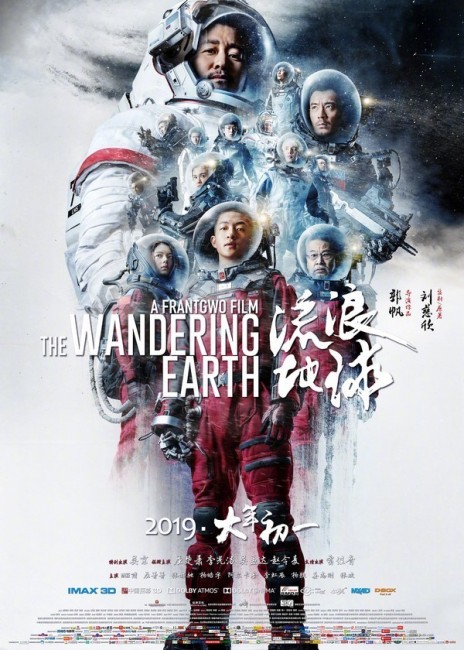 The Sun has begun to rapidly expand. In order to save the Earth, thousands of engines have been built that will move it out of orbit to a new location around another star. Chosen survivors are relocated in cities built underground. It is now seventeen years after the operation has launched. Liu Peiqiang is about to end his term of duty aboard the space station in orbit that monitors the engines. In Beijing, his son Liu Qi grabs his adopted sister Han Duoduo from school and takes her topside onto the frozen surface using a pass stolen from Han Ziang, the truck driver who raised them. However, they are discovered and arrested as they set out in the truck. At the same time, Earth is making a traverse of Jupiter but Jupiter’s greater gravity is dragging the atmosphere out and causing the engines to fail. The truck is appropriated by engineers to carry a Lighter Core to restart one of the engines. The two of them make the choice to join the team on a dangerous journey across an unstable collapsing terrain.

The Wandering Earth was the second highest grossing Chinese film of all time. It became a massive success when it was theatrically released in Western countries where it became the second highest-grossing non English-language film of all time. The film is based on The Wandering Earth (2000), a novella by Liu Cixin, who became the first Chinese author to win the science-fiction community’s Hugo Award with his novel The Three-Body Problem (2007).

The Wandering Earth has been intended as the Chinse equivalent of a Roland Emmerich film. You are reminded of Emmerich films like The Day After Tomorrow (2004) and 2012 (2009), as well as Emmerich’s former writer Dean Devlin’s Geostorm (2017). Much of the film has been construed in terms of epic-sized mass destruction set-pieces – the trucks racing through collapsing ice ravines, the fight to activate the Lighter Core as Jupiter’s gravity wreaks devastation, the drama of a collapsing elevator, an EVA sequence aboard a space station being pelted with debris.

While the Chinese have clearly placed enormous effort into The Wandering Earth, it never quite hits the same epic heights of an Emmerich mass destruction spectacle. There is a Yellow Pages sized list of effects companies at work and they are clearly giving it their all and fill the screen with determinedly in-you-face spectacle. However, there are also problems with the effects. One of these is that much of the film takes place in a snowy wasteland and the digital effects have a pretty artificiality that often ends up making them look like illustrations for a Christmas card.

The other is that the drama seems incredibly canned. It consists of sequence after sequence where people are racing and fighting for their lives but the drama feels so contrived that you simply detach from what is happening. The sole reason the trucks dive through a ravine is to have drama with rock and ice falling down on them. The sole reason people ascend a vast elevator shaft is to have drama with a plunging elevator cage. There is no real reason for the lighter core to have to be triggered between two large masses of metal coming together other than to have someone trapped between them and an improbable rescue. There is no real reason for the energy not to be enough to ignite Jupiter other than to provide a tragic sacrifice of one of the central characters. And I couldn’t even work out why it was necessary for two characters to have to go outside across the space station other than to have a space station mass destruction sequence a la Gravity (2013).

The main (and majorly substantial) problem I had with The Wandering Earth was plain bad science. (Another thing it has in common with Roland Emmerich’s disaster spectacles). It is an interesting and imaginative premise but suffers from absurdly naive and poorly researched science. The first of these is the idea of moving Earth. It is stated that the Earth’s rotation has been stopped. This in itself causes major problems – the equator rotates at a speed of 1000 mph so if you can imagine putting the brakes on that, the result would end up causing everything not nailed down to go flying in the opposite direction at a significant velocity. (For the sake of conjecture, we will assume that the Earth has been very gradually slowed down). Even afterwards, what you would end up with is one side of the Earth in perpetual night with frozen oceans and the other side facing the sun a desert in perpetual day and an equator with hurricane-type weather.

However, as soon as you start accelerating the Earth towards its destination, other problems would occur. We are even told the speed at which the Earth is travelling – 0.1% of the speed of light. That doesn’t sound much but in fact equals 18,641 miles per second – to put that in perspective it is nearly 400 times the speed of the fastest man-made object. With the Earth’s rotation stopped, everything not nailed down is going to shift in the opposite direction of the travel – in much the same way that when a car accelerates off, people are pushed back into the seat by the force of acceleration. In other words, the trail of vapour that we see Earth leaving behind it is not going to be coming from the engines but is going to be the Earth’s oceans and atmosphere, not to mention all the loose buildings, vehicles, vegetation and bodies being flung out into space.

The other problem is that you are talking about moving the Earth out of its orbit. Temperature differences on Earth range between the Arctic and the Sahara, all of which fit within a zone of 8000 miles (along with angular tilt). Moving the Earth even a few thousand miles, let alone all the way out of orbit to Jupiter, is going to radically shift those zones. Jupiter is so far from the sun that the temperature on it and its moons goes well below -200 degrees. Furthermore, from Jupiter, the sun is so distant that it would look smaller than a thumbnail if you were to look up at it in the sky. In the film, we do see the Earth’s surface as frozen and one character instantly crystallizing after exposure. However, the surface is also well lit when in fact it should be equivalent to the darkness of a starry night with no moonlight.

The climactic plan also involves igniting the hydrogen in Jupiter and using the explosion to push the Earth out or orbit. This is the most problematic of the pieces of bad science in the film. All that this is going to achieve is raining massive destruction down on the Earth, if not actually obliterating it. The assumption the writers seem to make is that the shockwave from the explosion would push the Earth away. It may do that if were talking about it occurring on Earth that has an atmosphere for shockwaves to travel through (although the problem with any explosion is that shockwaves are very quickly followed by a heatwave and field of debris). There is a vacuum between Jupiter and anything that orbits it (and okay this may be thinly filled with some of the atmosphere that Jupiter has sucked out of the Earth) but there would be no shockwave, just a massive fireball raining down on the Earth. Given that Jupiter is 1300 times the size of the Earth, this would be somewhat equivalent to hopping into a refrigerator in the path of a nuclear explosion and hoping to survive.