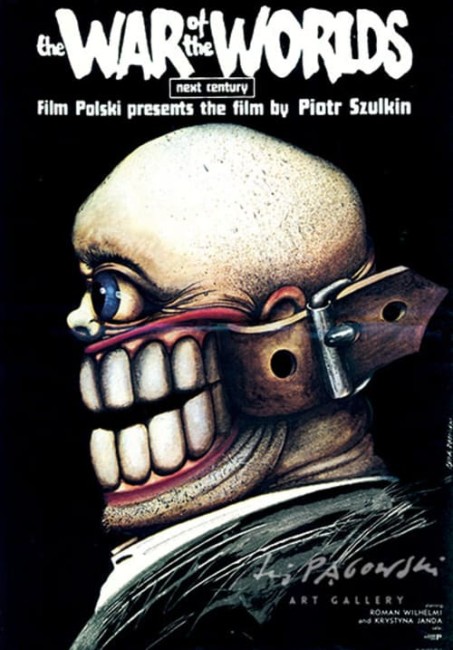 It is three days before the end of the century. Thirteen days earlier, the Martians landed on Earth. Iron Idem hosts the country’s top independent news show. One day, he is told to read a new script that consists of statements that the Martians are friendly and that people should cooperate with their friendship society and allow them to collect information regarding blood types. After Idem questions this and is told that by his manager that he is free to broadcast whatever he wants, his apartment is trashed by security forces and his wife taken away. Idem goes along with what is asked of him but through the process of resisting is rendered homeless. He begins to see just what the government is doing to institute an authoritarian regime, all abetted by what is broadcast on television.

Piotr Szulkin was a Polish director who emerged in the 1970s and gained a certain distinction – one not widely known in the West – for a handful of science-fiction films that come with a strong allegorical content. These include The Golem (1979) set in a technology-controlled future; the post-holocaust film O-Bi, O-Ba: The End of Civilization (1985); and Ga-Ga: Glory to the Heroes (1986) concerning humans landing on an alien world. Into the 1990s and beyond, with more sporadic works such as Femina (1991) and the satire King Ubu (2003), it appears that Piotr Szulkin has abandoned genre material, if not filmmaking altogether.

On the other hand, while The War of the Worlds – Next Century does not adapt Wells, it reworks many of the major themes (and often in very different ways). The Wells novel was an allegory for the British Empire finding the certain invincibility in its own might coming up against a superior power. Each of the other major film versions of the book adapt this allegory to fit the times they were made – the Pal version turned it into a parable for post-War American dominance and fear of the new terrors that had been unleashed with the atomic bomb; Steven Spielberg turned it into an allegory for the Iraq War, the BBC series for Brexit.

The War of the Worlds – Next Century was made in Poland during Soviet occupation of the country. It came out during a crucial era of modern Polish history, the period in which the Solidarity trade union under Lech Walesa became a movement that started to resist and eventually overthrew Soviet rule. As such, Piotr Szulkin does the old Star Trek (1966-9) standby of translating contemporary political issues into allegories by rewriting them with aliens as stand-ins.

Unlike Wells, Welles et al, Piotr Szulkin is not so much concerned with an alien invasion – The Martian itself is amusingly represented by no more than footage of NASA rocket launches played in reverse, while the aliens are short comic figures played by dwarves in oversized boots and windbreakers with their skins painted grey who look more like the pertinent alien invasion film that they have stepped in from is Martians Go Home (1990). What interests Szulkin is more the way that the local authorities use the Martians as a pretext to maintain an authoritarian regime. Notedly, even when the Martians return home, the regime then uses the opportunity to continue their hold on power and keep doing the same things they were doing before by simply reversing the public sentiment against rather than in support of the Martians.

Much of the imagery of state control is so broad that it could stand for anything – see parallels to the alien invasion that took place in the US tv series V (1983) around the same time. However, where V was generic in its imagery, all that Piotr Szulkin had to do was appropriate the imagery from contemporary Soviet rule – the censorship of free media, i.d. laws, the queues over food shortages. The film becomes an all-but-direct attack on Soviet control. With perfectly black regard, within the first few scenes, Piotr Szulkin has broadcaster Roman Wilhelmi being told by his boss (Mariusz Dmochowski) that he is free to say what he likes on air and then in the next scenes black-helmeted security forces break into Wilhelmi’s apartment and trash it, taking his wife away zippered up in a body bag. In the subsequent scenes, we see Wilhelmi being caught in an almost Kafka-esque level of implacable bureaucracy when he tries to deal with the volunteer friendship society.

The central issue at the forefront of Szulkin’s mind is the issue of a free press and the state influence on/control of that, while the latter half of the film builds to quite a sophisticated attack on the way in which the media is used as propaganda by the authoritarian state and the ways in which populist entertainment is served up as bread and circuses to pacify the masses who seem to lap it up the more stupid it gets. (This is a film whose satire has become even more potent in the decades since it was made).

There is the perfectly black moment where Roman Wilhelmi goes to a church to confess his woes and then opens up the priest’s booth to find the video image of one of his own broadcasts. There is also the potent ending where Wilhelmi’s own words of protest are selectively edited and turned around to become words of treason while the crazy who attempted to blow up the tv studio is turned into a martyr for resistance against the Martians. Wilhelmi is taken away to be executed and in an intriguingly surreal ending, we see him being shot by firing squad on the tv screen in the foreground while in the background he is allowed to go free, whereupon he passes the tv cameras and opens the soundstage door to walk off into a white mist.