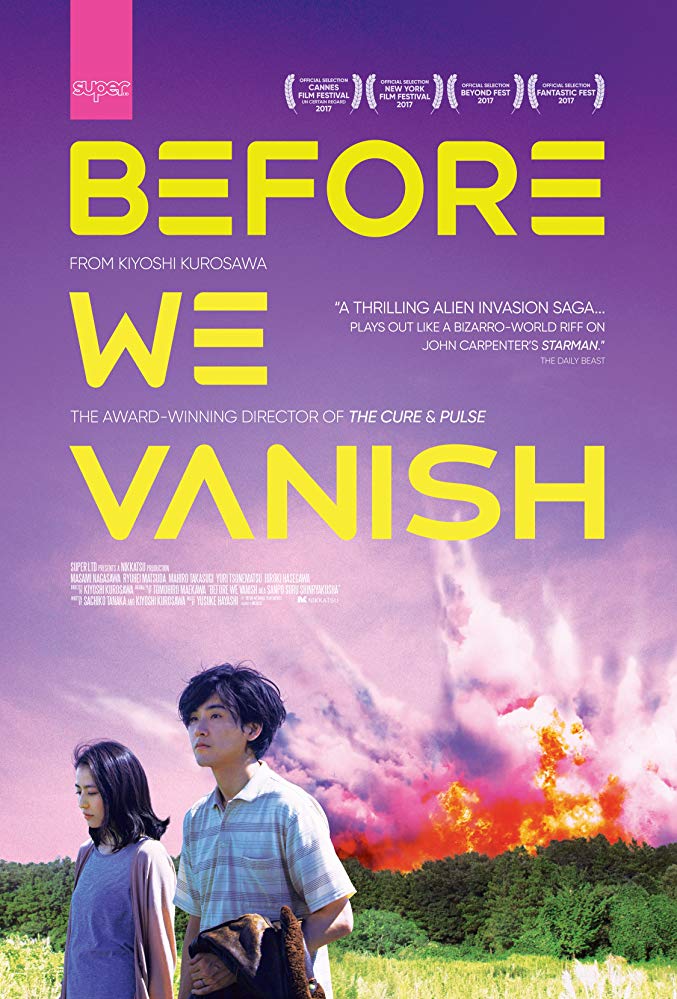 Narumi Kase is asked to pick up her husband Shinji from the hospital where he has been taken after behaving erratically. She brings him back home but he has difficulty with basic things, even coordinating walking. Meanwhile, the tv journalist Sakura is approached by a young man Amano who asks for a lift. Amano similarly behaves strangely. He tells Sakura that he is one of three aliens sent to Earth to inhabit human bodies and pave the way for an invasion. Sakura accompanies Amano as he set out to find the third alien who inhabits the body of teenage girl Akira Tachibana. As each of the three aliens pass among humans, they ask people to picture a concept that is new to them and then touch that person’s forehead, allowing themselves to absorb it – something that has the effect of removing the concept from the person’s mind. Amano reunites with Akira and they set about finding Shinji and building a communicator to contact their fleet. However, the wake of dead bodies that Akira leaves behind soon has them hunted by government forces.

Japan’s Kiyoshi Kurosawa emerged as a director in the 1970s but started to gain attention around 2000 for his weird and bafflingly unfathomable horror films. Kurosawa has made quite a number of genre films that include the haunted house film Sweet Home (1989); the psycho film Guard from the Underground (1992); Cure (1997) about a series of cryptic hypnotism murders; Serpent’s Path (1997) and Eyes of the Spider (1998), a duo of studies in obsessive revenge; the medium thriller Seance (2000); the ghost story Pulse (2001) – his best known film that later underwent an English-language remake; Bright Future (2003), a strange film about two frustrated workers and jellyfish amok; Doppelganger (2003) about an overworked man being helped out by a mysterious double; the ghost story/mummy film Loft (2005); the ghost story Retribution (2006) and the ghost story Daguerreotype (2016).

In the 2010s, for reasons known only to he, Kurosawa seems to have almost completely abandoned the cryptic horror films where he made his name. These have been replaced by award-winning dramas such as Tokyo Sonata (2008), even ghost romances like Journey to the Shore (2015). Amid this, it would also appear that Kurosawa has now developed an interest in science-fictional subjects – although, as his one other outing in the field, the banal shared dreamscape film Real (2013), demonstrates, this is not a genre at which he seems a natural fit. There is almost nothing in either of his science-fiction ventures, Real and here, that touches the sense of uncanny and deeply inexplicable that regularly features in his horror films.

Before We Vanish is an Alien Invasion film but sits at almost 180 degrees remove of the big spectacular effects heavy invasions of films like Independence Day (1996) and War of the Worlds (2005). Kurosawa’s invasion is low key and almost entirely effects free – in the opening scene, Yuri Tsunematsu causes a vehicle crash while walking down a road, there is some gunplay and a climax with various parties being shot at by a drone and that is it. Kurosawa shoots very low key – he takes his camera into the streets, warehouses, people’s homes – and films everything in an unexceptional, naturalistic manner. It comes as no particular surprise to find that the film is based on a play.

It takes some time to work out what is going on but when it does Before We Vanish becomes an oddly interesting film. There is never much more to it than Kurosawa switching back and forth between twin plotlines – one following Narumi and her husband Shinji who is acting strange, the other about the journalist Sakura who agrees to take Amano for a ride to find the third alien Akira Tachibana. There is certainly a fascination in watching the characters and their alien reactions to everyday things. There are fine scenes in the latter sections as we watch the husband Ryuhei Matsuda slowly becoming more human.

Especially intriguing are the scenes where the aliens ask people to remember concepts, touch their finger to the person’s forehead and remove the idea, absorbing it themselves. Although the part I kept wishing Kurosawa would have explored more is what happens to the people who are then said to be left without the concept – how would someone deal with life if the concept of family or love had been taken from them as we see happening? At most, we see Masami Nagasawa’s boss acting like a child in the bookstore.

In the last third of the film, Kurosawa adds some scenes with pursuing government agents trying to stop the aliens but the film didn’t really need an injection of action scenes – the change of pace feels awkwardly grafted on. At least, in adapting from another source work, Kiyoshi Kurosawa makes one of his most straightforward and least bafflingly cryptic films – you would not guess it was the same director if you watched Before We Vanish alongside any of his horror films. Perhaps the most baffling aspect of the film is the end where Kurosawa simply has the aliens choose not to communicate with the rest of the force and the film to go out on a puzzling epilogue.