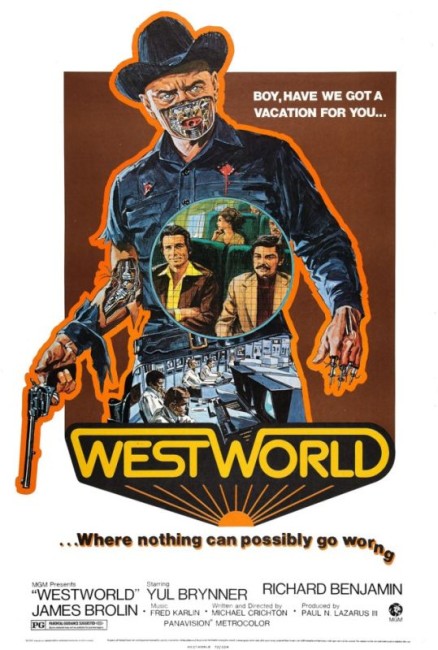 For a thousand dollars a day, the futuristic amusement park Delos offers tourists the chance to roleplay in romanticised versions of the Roman Empire, the chivalric Middle Ages and the Wild West where robot gunslingers, whores, knights and townspeople, even robot animals, are programmed to interplay with the guest’s fantasies. In Westworld, the robots, programmed for fighting gun-duels, suddenly start go amok and shoot the guests for real.

Star Trek (1966-9) fans may lay claim to the idea of the hi-tech amusement park going amok having been done first in the episode Shore Leave (1966). Nevertheless, Westworld makes positively ingenious use of the idea – that of a highly sophisticated theme park allowing tourists to playact Western myths using androids, which then inexplicably goes amok. Westworld was the directorial debut of Michael Crichton. Michael Crichton, a former Harvard medical school graduate, had had enormous success with his novel The Andromeda Strain (1969) and the film then adapted from it The Andromeda Strain (1971). Crichton used the clout that the success of Andromeda had given him to make his directorial debut with the tv movie Pursuit (1972), adapted from his novel Binary, a thriller about bio-terrorism. From there, Michael Crichton then went onto make Westworld which, despite being made on a modest budget, ended up becoming one of the most successful science-fiction films at the box-office in the era prior to Star Wars (1977).

Almost all of Michael Crichton’s science-fiction is dominated by the theme of technology running amok – of complex systems going afoul due to unforeseen accidents or basic human error. This theme runs through The Andromeda Strain where a dazzling high tech biological containment facility is nearly destroyed by something as small as a jammed ticker-tape printer; The Terminal Man (1974) where attempts to pacify an epileptic with wires in the head cause him to become addicted to the shocks and run amok; and Jurassic Park (1993) where genetically recreated dinosaurs get loose when a greedy employee shuts the security system down; or the nanotech swarm run amok in his novel Prey (2002). Westworld came with a highly-attention grabbing advertising poster and byline “Welcome to Westworld where nothing can go worng,” a line that sums up Michael Crichton’s recurrent techno-fear preoccupations perfectly.

One of the ingenuities about Westworld is that not only is it about the idea of an android theme park but there is another level to it where the film is deflating all the macho images about the Western. In one hilarious scene, Richard Benjamin enters the saloon and orders a vodka martini rather than a whisky to derisive looks from the rest of the patrons. In an ingenious piece of casting, Michael Crichton managed to cast Yul Brynner in the role of the mechanical gunslinger, where Brynner gives a wonderfully cold and surly performance. Crichton has Yul Brynner dressed as the same character he played in The Magnificent Seven (1960). It is a piece of casting that allows Crichton to make it pointedly clear that this is the Hollywood version of the West we are seeing, not an historical one.

Michael Crichton does a more-than-creditable job in the director’s chair, particularly when it comes to the chase scenes with the mechanical gunslinger and its relentless never-varying pursuit of Richard Benjamin. Crichton also demonstrates a considerable dry wit in his direction, something that never emerged in any of his subsequent films. In the background of the control-room scenes, he drolly contrasts the detached chatter as various scenarios are enacted with technician’s trying to find their laundry and the like. Similarly amusing is the mixture of modern colloquialisms and mediaeval dialogue dropped alongside one another in the brief visit to Romanworld. Crichton fascinatingly cuts back and forth between the illusion and what is going on behind the scenes – panning through the laboratory showing horses and snakes, gunfighters and hookers lying with their mechanical guts exposed or images like a van incongruously driving into the Western street to pick up the dead bodies and the fountains suddenly coming on and wagon trains starting to roll as morning comes.

The one big hole in the script is that Michael Crichton fails to explain the nature of the malfunction – what causes the androids to go amok, exactly why the androids dislike humans and how the androids override the safety feature on their guns that prevent them from hurting humans. There is only the vague notion of machines having become too complex and decided they don’t like us. The business of being able to detect the androids because the technicians have not gotten the hands right seems improbable – if they can make the androids indistinguishable from humans, even to the point that one can have sex with them, it seems unlikely they an unable to do something relatively simple like get the hands right.

Westworld was made on a surprisingly low $1.25 million, yet looks ten times that. Cost cutting was achieved through shooting on standing Western sets on the MGM backlot and the use of simple optical tricks such as cut-action shots to substitute actor’s faces and mechanical mockups as technicians pass in front of the camera.

Futureworld (1976) was a disappointingly poor sequel. This was followed by a tv series Beyond Westworld (1980), which featured people trying to stop a mad scientist’s plans to use the Delos androids to take over the world and only lasted six episodes. A theatrical remake of Westworld was announced for much of the 00s, passing through various directors. This finally came about with the tv series Westworld (2016– ) under the direction of Jonathan Nolan, which expands the basic idea out with considerable fascination. The theme of the Western simulation and the android amusement park has been borrowed in other films such as Welcome to Blood City (1977), The Outsider (1996) and Vice (2015).

Michael Crichton’s subsequent films as director were the medical conspiracy thriller Coma (1978); the non-genre The Great Train Robbery (1979) about a Victorian heist; Looker (1981) about virtual models; Runaway (1984) about a police squad dealing with amok robots; and the courtroom thriller Physical Evidence (1989). The latter was a flop and Crichton retired from directing and returned to writing novels. In the 1990s, Steven Spielberg gave a huge second wind to Michael Crichton’s career all over again with the runaway success of Jurassic Park (1993), adapted from Crichton’s 1990 novel about genetically-reengineered dinosaurs. Crichton became a best-selling novelist again and all of his novels were snapped up as film properties. There were numerous other adaptations of his books:– Rising Sun (1993), a thriller from Crichton’s alarmingly racist novel about Japanese business practice; Disclosure (1994), a thriller about workplace sexual harassment; Congo (1995), a modern lost world quest; Twister (1996) from a Crichton original screenplay about tornado chasers; The Lost World: Jurassic Park (1997); Sphere (1998) about the investigation of a crashed UFO underwater; The 13th Warrior (1999) from Crichton’s novel Eaters of the Dead (1976), a retelling of the legend of Beowulf with Neanderthals; Timeline (2003) based on Crichton’s novel about time travel; and the tv mini-series remake of The Andromeda Strain (2008). Crichton also created the hit tv medical drama ER (1996-2009).