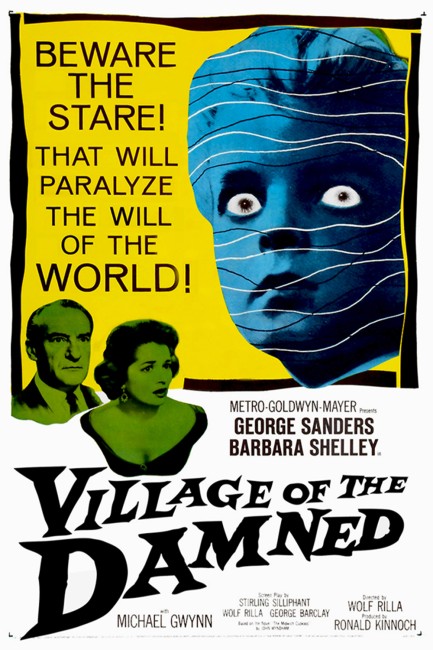 A mysterious forcefield affects the English village of Midwich, causing everybody within its radius to fall asleep. Afterwards, every women of child-bearing age is found to be pregnant, including teenage girls and women whose husbands were absent. All give birth to blonde-haired children who have remarkable intelligence and a complete lack of emotion. As the villagers band together in fear, the children group together to defend against all that threatens them and demonstrate powerful mind control abilities.

This fine adaptation of John Wyndham’s novel The Midwich Cuckoos (1957) is one of the few successful attempts at translating across the Atlantic the paranoia of 1950s American science-fiction films like It Came from Outer Space (1953), Invaders from Mars (1953) and Invasion of the Body Snatchers (1956). Village of the Damned adapts the fear of takeover that plays out in American science-fiction of the 1950s in uniquely British ways – the film makes considerable play between the sedate normality of the English countryside and the creepy arrival of the unexplained.

The very effectiveness of the 1950s alien takeover films was that the aliens were not BEMs but wore the very same skin that humans do but had no emotions. Village of the Damned is one of the most effective examples of this – the children are all human but their humanity is subtly exaggerated in a way that makes them seem infinitely more alien – slightly raised foreheads, a preponderance of blonde hair. (In an effect that director Wolf Rilla tried to argue against, the children have also been given glowing eyes when their powers are in operation, something that crudely and unnecessarily overstates their chill presence). In some respects, Village of the Damned could almost be read as a film about the fear of Nazism – it is, after all, about taking on a group of Teutonic people who seem intent on becoming the Master Race.

Like Invasion of the Body Snatchers et al, the invasion digs deeply into the social status quo. The infiltration notably comes inside the placid unit of the home but in a very British take on things it cuts right across the class board – from the unwed working class mother to upper-middle class Barbara Shelley. One can only guess at the impact that the taboo lines the film crosses would have had in its time – unwed pregnancies, allusions to the Immaculate Conception, patricide, infanticide. In fact, the reason that Village of the Damned was made in England was because the Catholic Legion of Decency had protested against MGM’s plan to make the film in the US three years earlier.

The full scope of John Wyndham’s novel is retained, resulting in a film that is intelligent and thematically audacious. Wolf Rilla creates a number of scenes that build with remarkably chilling effect – the opening is a masterpiece of the inexplicable in watching the scientists trying to determine the extent of the invisible barrier with bobbies collapsing the moment they cross the line. The climactic scene with George Sanders trying to maintain the image of the brick wall in his head as the children try to break it down is also a visually striking and tensely sustained sequence.

Children of the Damned (1964) was billed as a sequel but is more a reworking of the same theme and a lesser film. The book was disappointingly remade by John Carpenter as Village of the Damned (1995) and the tv mini-series The Midwich Cuckoos (2022).