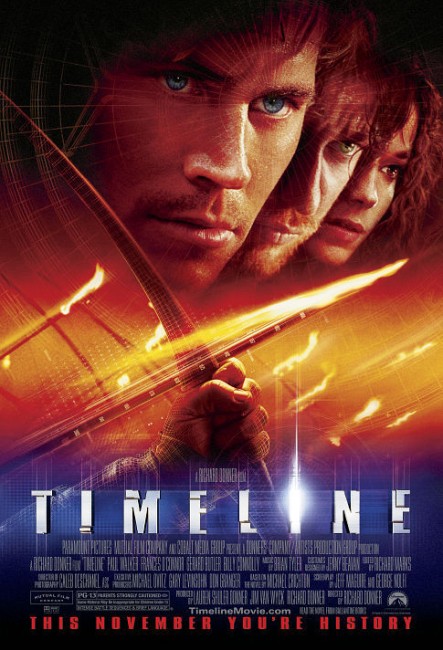 Chris Johnson joins his father, an archaeology professor, at the dig his father is supervising at Castlegard in France. The team makes a breakthrough into an old ruin where they are startled to find a modern spectacle lens, as well as a message in Professor Johnson’s handwriting, dated 1357. At the same time, Professor Johnson goes missing. Chris and the team are brought to a laboratory in the New Mexico desert by the dig’s sponsor, technology magnate Robert Doniger. Doniger explains how, in his search for a means of teleporting matter, he discovered that he had accidentally opened up a wormhole in time that leads back to Castlegard, 1357. Professor Johnson has become lost while on an expedition back there. The others are quickly outfitted and sent back to rescue him. However, the mission goes disastrously wrong as the time travel equipment is destroyed in an explosion and they are then caught in skirmishes between the English and the French.

In the 1970s, novelist Michael Crichton found some success with screen adaptations of his books, the extraterrestrial virus film The Andromeda Strain (1971) and the neurosurgical Frankenstein film The Terminal Man (1974). Michael Crichton was able to use the influence these gave him to make his debut as a film director. This was with the tv movie Probe (1972) and then the highly successful android amusement park film Westworld (1973). Michael Crichton made several other films as director – the medical thriller Coma (1978), the period caper film The Great Train Robbery (1979), Looker (1981) about virtual models, the robots amok film Runaway (1984) and the courtroom thriller Physical Evidence (1989). By the 1980s, Michael Crichton’s brand of technology-focused alarmist science-fiction found increasingly less interest from the movie-going public and Crichton returned to writing books. That was until a little film based on one of Michael Crichton’s books became a runaway success – namely Jurassic Park (1993). Suddenly the rights to every Michael Crichton book not filmed were snapped up and we had adaptations of the Japanese business practice thriller Rising Sun (1993), the sexual harassment thriller Disclosure (1994), the lost world film Congo (1995), The Lost World: Jurassic Park (1997), the alien contact film Sphere (1998), the historical film The 13th Warrior (1999) and the tv remakes of The Andromeda Strain (2008) and Westworld (2016– ) being made, as well as Crichton’s original screenplay Twister (1996) about tornado chasers. Timeline is based on Michael Crichton’s 1998 novel. (This leaves, as of this writing, Crichton’s air disaster book Airframe (1996) and the most recently published Prey (2003) as the only of his novels that remain unfilmed, which is quite a good batting record. One would love to see The Terminal Man remade sometime if anyone is listening).

Timeline was directed by Richard Donner. Richard Donner is a director with a number of genre associations. He came to success through the likes the occult film The Omen (1976), the comic-book adaptation Superman (1978), the Mediaeval romantic fantasy Ladyhawke (1985) and the massively successful non-genre buddy cop drama Lethal Weapon (1987). Since the late 1980s, Richard Donner has increasingly started to seem like a director who has slipped into a comfortable middle-age and that his films have lost the creative sparkle they once had. Since the mid 1980s, he has churned out the banal likes of the Dickens modernisation Scrooged (1988), the interesting children’s film Radio Flyer (1992), which was a box-office disaster, the big screen tv remake Maverick (1994), and the entirely awful likes of Assassins (1995) and Conspiracy Theory (1997), not to mention three wholly unnecessary Lethal Weapon sequels.

In Michael Crichton’s books, he always places an enormous degree of research into whatever particular topic he chooses to write about – be it viral containment facilities, Japanese business culture, dinosaurs, sexual harassment law, the speculative possibilities of alien contact or, as in Timeline, Mediaeval history. That amount of detail – Crichton frequently intersperses his books with diagrams and graphs – is something that cannot always be adequately conveyed by film. Jurassic Park only skimmed over Crichton’s talk about genetic engineering and chaos theory, while most pointedly The 13th Warrior eliminated all of Crichton’s discussion of Persian culture and explanation of modern-day Neanderthal survivals. On the other hand, some Crichton film adaptations, most notably Rising Sun, Disclosure and Sphere, have managed to keep a good deal of the detail intact. Timeline alas does not.

The film of Timeline is Michael Crichton Lite. The film has dumped all the things the made the book an interesting read – Crichton’s dissemination of many modern misconceptions about the Middle Ages, the fascinating clashes between modern and historical culture and even the imaginative depiction of how the use of language between the two periods would have drastically changed. While Richard Donner’s art directors have gone to a great deal of effort to obtain an authentic-seeming view of the past, what we have now is only a Mediaeval adventure film with a science-fiction gimmick. One struggles to remember even a single historical fact that Timeline imparted. There is only a single scene that even touches upon the linguistic differences – where Gerard Butler and Anna Friel are floating down a river and she struggles with blank incomprehension to understand when he asks her if she is going out with or seeing anyone – otherwise Timeline is like an episode of Doctor Who (1963-89) or Lost in Space (1965-8) where people turn up on an alien planet and the inhabitants just happen to speak modern English.

To the film’s credit, it does okay as science-fiction – retaining Crichton’s time paradoxes and actually coming up with a marginally more credible time travel theory involving wormholes. (In the book, Michael Crichton acknowledged the impossibility of time travel into the past and instead invoked quantum alternate world theories but then contradicted himself by giving us a series of time paradoxes where quite clearly the time travellers had travelled into their own historic past rather than an alternate world).

At the expense of stripping away all the detail of Crichton and essentially dumbing down the book, the film has in return pumped up all the easy box-office sell aspects – the romance; the swordfights; and the prominent emphasis on the poster of a young, good-looking contemporary male star – Paul Walker. Only none of it works. Timeline is a film that tries to appeal to everybody and ends up appealing to nobody – certainly not to Michael Crichton fans or anybody who enjoyed reading the book; certainly not to historical buffs, as it is an historical film that lacks any interest in its milieu or culture; not to historical spectacle fans as Richard Donner’s enervation of the swordfights is routine, barring the climactic attack on the castle; hardly romance fans; marginally only science-fiction fans; and hardly the people that are going to go because of a young sexy male star, who would almost certainly have no interest in the historical spectacle. To no-one’s surprise, Timeline met with indifferent box-office reception.