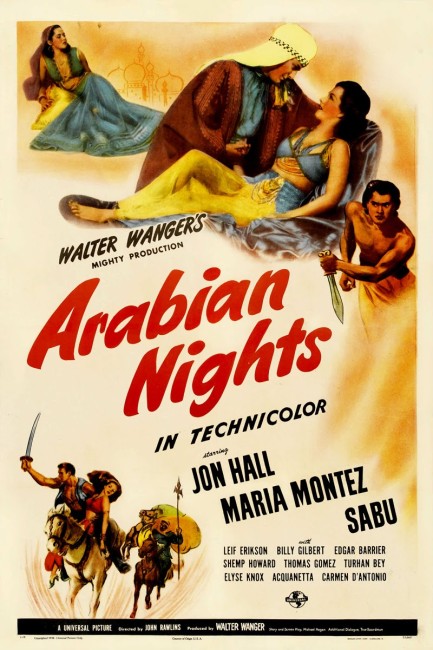 The overseer at a harem tells the story of Haroun-Al-Raschid, the caliph of Baghdad. Haroun’s brother Kamar was obsessed with Sherazade, the dancer at Ahmad’s circus. Sherazade had a certainty that she would marry the ruler of the land. Kamar then conducted a coup and Haroun was forced to flee. Wounded, Haroun was found in the street by Sherazade and Ali Ben Ali and taken back to the circus where no-one but Ali was aware of his true identity. Believing Haroun dead, Kamar claimed the title of caliph and immediately demanded that Sherazade be brought to him so he could marry her. However, Kamar’s captain saw Sherazade as a threat and ordered her and the circus people to be sold to slave traders. In captivity, Haroun set out to free Sherazade and in doing so found himself falling for her.

The Arabian Nights – or to give it its real name Alf Layla wa-Layla, which literally translates into English as One Thousand Nights and a Night – is one of the classic works of fantastic literature. In the story, the sultan Schariar has been betrayed by his wife and vows to marry a virgin each night and have her executed in the morning before she can betray him. The vizier’s daughter Scheherazade offers to marry him, telling the sultan a story each night but leaving its ending until the following night so as to spare her life.

The time when Arabian Nights was composed is unknown – sometime around the 9th-10th Centuries, with the stories originating out of the Persian oral tradition. Many of the tales were added over the years and their actual number varies widely from version to version. The collection first appeared in Europe with Antoine Galland’s twelve-volume translation Les Mille et une Nuits (One Thousand and One Nights) (1704-17). There have been a number of other translations since then, many adding and removing various tales, with the most famous of these being explorer Richard Burton’s The Book of a Thousand Nights and a Night (1885).

This version of Arabian Nights was made two years after the big success of the remake of The Thief of Bagdad (1940). The inspiration is more than clear – the same generalised Arabian Nights venue, the Technicolor spectacle, even down to Indian actor Sabu cast in fairly much the same role in both films. Both films also have the same storyline where a rightful ruler is living as a beggar and not recognised by those around him while trying to reclaim his throne back from an usurper.

This a film that has essentially appropriated the name Arabian Nights and taken nothing else from the stories beyond the setting. The original stories featured the vizier’s daughter Scheherazade who told the sultan a story each night, keeping the ending to the following night so as not to lose her head. Here the storytelling structure has been thrown out – the film offers no more than a single story, moreover one that has been invented for the screen. Scheherazade has gone from the vizier’s daughter to Maria Montez, a bratty dancer in a circus for whom both Jon Hall’s rightful caliph and Leif Erickson’s evil usurper brother develop a case of the hots. She also has some belief that she will marry the ruler of the land – some descriptions of the film call this a prophecy but it is so vaguely defined it could just as easily be her self-determination to aim for the top.

As with most of the abovementioned films, the film features a vision of Arabia that travels no further than California state. All of the film were shot in Hollywood – in the case of Arabian Nights the Universal backlot, although the production did at least travel to Utah for the desert scenes. In every single case, these films featured a vision of Arabia cast with Caucasian faces – Arabian Nights gets mildly more exotic and features the Indian Sabu; Maria Montez, who was born in the Dominican Republic; and a small role from Turhan Bey who was of Turkish origin – but no Arabic actors.

The other notable thing is that the film gives the Arabian Nights much more of a comedic focus. This is probably no more evident than the casting of Shemp Howard, one of the Three Stooges, as Sinbad. Howard’s Sinbad and John Qualen’s Aladdin are made into comic supporting characters. Qualen has a routine throughout the film where he rubs every lamp he comes across to see whether it is his magic one. The film’s non-fantastical approach is clearly evident in one scene where Aladdin rubs a lamp and a shadow appears to grow on the wall behind him, only for it to be revealed as a circus strongman.

The most comic character in the film is Billy Gilbert, a former Vaudeville performer who was known for his work with Laurel and Hardy, as the portly circus owner. He has a thing throughout where he wades into every fight scene and defeats his opponents by shoving his protuberant belly at them – all accompanied by a big drumbeat sound effect. (It is a combat move that would in actuality have next to zero practical value, up until probably about the point that his opponent rebounded and pricked said stomach with his sword). The film’s most excruciating scene is surely one where Gilbert appears in drag as a merchant’s wife to distract a group of soldiers.