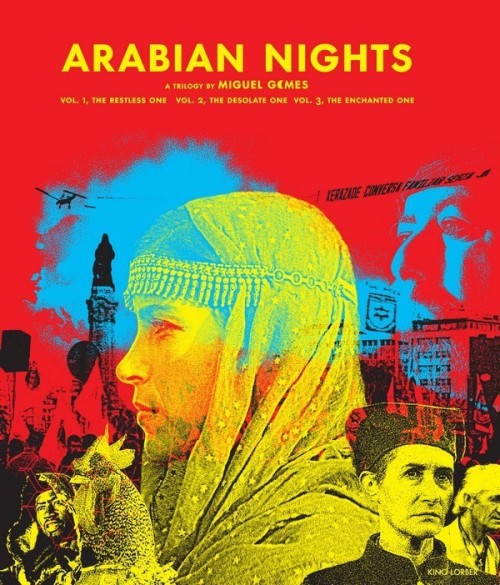 The Work of the Film Director, of the Shipyard Workers and of the Wasp Exterminator:– As Portugal’s Viana de Castelo shipyards are about to close, a film director struggles to make a work that encapsulates what Portugal went through under the imposition of economic austerity but despairs of being able to do so. The Men with Hard-Ons:– As the bankers and economic experts move in to impose austerity, a magician appears offering a cure for the men’s inability to achieve erection. The Story of the Cockerel and the Fire:– In the town of Resene, a judge comes to question to a rooster that is accused of crowing too loudly. It explains that it is trying to warn the town about a teenage arsonist who has been lighting fires because of heartbreak. The Swim of the Magnificents:– Luis works at a help centre that offers counselling to people dealing with economic struggles. He places his hopes on everybody coming together for a group swim at the beach.

Scheherazade:– The storyteller Scheherazade remains in the sultan’s palace but dreams of the wider world beyond. The Inebrianting Chorus of the Chaffinches:– Various chaffinch trainers capture and train their birds, readying them for competitions.

Miguel Gomes is a Portuguese director who has risen to some international attention. Gomes’s first film was The Face You Deserve (2004), a similar anthology to this based on two fairytales. Gomes went on from there to find increasing festival acclaim with non-genre films such as Our Beloved Month of August (2008) and Tabu (2012).

Here Miguel Gomes claims to be making an adaptation of Arabian Nights or The Tale of 1001 Nights. This is a text that goes back well into Persian and Arabic history – the oldest recorded versions date back to the 9th and 10th Centuries. The author (or authors) of the stories are not known but it is believed they were added to by many different hands. The book gained a popularity with various translations made during the Victorian era. The wraparound story involves the Vizier’s daughter Scheherazade who has agreed to marry the Sultan Schahriar who has a habit of killing his wives. Her strategy to stay alive is to tell a series of engrossing tales and leave their ending open so as to preserve her life until the next day. From out of these tales, we get popular figures like Aladdin and Sinbad.

What needs to be said about this Arabian Nights is that it is not an adaptation of 1001 Nights or any of its stories; it is not even an attempt to modernise the stories. There is a Scheherazade but she does not spend the films telling tales and finally there is no Arabian setting. What we do have is a series of stories where for some metaphoric reason that doesn’t fully make sense to me, Miguel Gomes sees appropriating the name of Arabian Nights as a way of telling a series of short film pieces each of around 30 minutes (some longer) that have the overarching theme of life in Portugal during the Austerity Crisis that was imposed on the country between 2010 and 2014. Some stories directly deal with this – the story about the closing of a shipyard, one about a help centre for the unemployed, another a satiric piece about the bankers and economists – while others are slice of life pieces that have no direct relevance at all.

The other thing that should be noted is that Arabian Nights is three films. Or maybe just one film in three parts. In most places where it screened, it was split into three separate films each of two hours plus, which each had their own screening. The credits however treat the film as one part. I have chosen to review the film as one entity rather than write a separate review for the simple reason that it makes for a more cohesive piece, not to mention reduces my workload in not having to write three different reviews.

A good part of the confusion you get in watching Arabian Nights is that it in some parts it is fiction, while in other segments it acts as a documentary. Sometimes the film is confusingly both a mix of documentary and fiction at the same time. The Swim of the Magificents looks like it is a documentary about the workers at a help centre, although the end credits reveal that they are being played by actors, while the portraits of their clients appear to be actual interviews with members of the public who tell their stories.

The opening segment, The Work of the Film Director, of the Shipyard Workers and of the Wasp Exterminator, mixes documentary depiction of the closing of a Portuguese shipyard and another piece about a wasp exterminator with the clearly fictional woes of a director who struggles to depict the Austerity Crisis and can’t decide on realism or a morally uplifting drama and decides to deal with it by abruptly running away. (You expect this to be a metaphor for Miguel Gomes but we never see anything of the director again).

All of this sits alongside clearly quite fantastic elements of the Magical Realist variety. The narrator in The Swim of the Magnificents visits a beach where there is a stranded whale, which abruptly explodes, raining down blubber everywhere, along with a mermaid. The Owners of Dixie is a mundane observational about a dog that passes through the hands of several owners where the piece peculiarly ends with the appearance of a ghost double of the dog in question.

The Story of the Cockerel and the Fire is two stories almost – the second half deals with two young loves (where much of what happens is relayed in textspeak on screen), one of whom starts brush fires in the town’s hills because of romantic rejection, while the first half of the piece deals with an annoying rooster’s crow where a judge is brought in to interpret what the rooster is saying and finds it is trying to warn about the situation.

And then there are segments that are purely fantastical in nature. The Men with Hard-Ons is a satiric piece that depicts the bankers and economists who were brought in to enforce austerity where a magician appears offering a spell that heals their erectile dysfunction, causing them to become happy once again and ease off the financial burdens they impose. The Tears of the Judge has a judge trying a case held in an open-air arena and finding that a simple case between a landlord and tenant has a chain of causes that each affect the other’s actions, including the appearances of a talking pantomime cow, masked mischief makers, a deaf woman and a genie.

The segment that comes the closest to Arabian Nights is Scheherazade that opens the third film. This takes the viewpoint of Scheherazade trapped in the sultan’s palace dreaming of life beyond the walls and takes us through various lands and peoples she imagines travelling through (all of which are mundane lands and peoples on the contemporary Portuguese coast, which are described in the terms of an Arabian Nights story). Towards the end of this, the narrator must deal with the appearance of an annoying air genie – one of which later falls into the net of one of the chaffinch trainers in The Inebrianting Chorus of the Chaffinches, an episode that is otherwise a pure documentary.

I was sporadically amused by Arabian Nights but mostly felt bored by it. It is too long and indulgent. If Miguel Gomes was seeking to make something that took a snapshot of the effects of Portuguese austerity then he fails as many of the stories do not even intersect with it at all. Moreover, none of the stories are constructed as drama or even reach any resolution – they are more amiably ambling portraits of people and their lives that mostly chart mundane happenings.

Crucially though, if Miguel Gomes were seeking to mimic the type of Arabian Nights storytelling, then as the equivalent of Scheherazade he would almost certainly have lost his life well before the first night was up. By the time I was making my way through Volume Two: The Desolate Ones, which is singly the most dull and uninteresting of the films, I was finding my dedication to watching the whole of Arabian Nights a hard slog and gritting my teeth that it meant I still had the equivalent of yet another two hour film to watch after that.