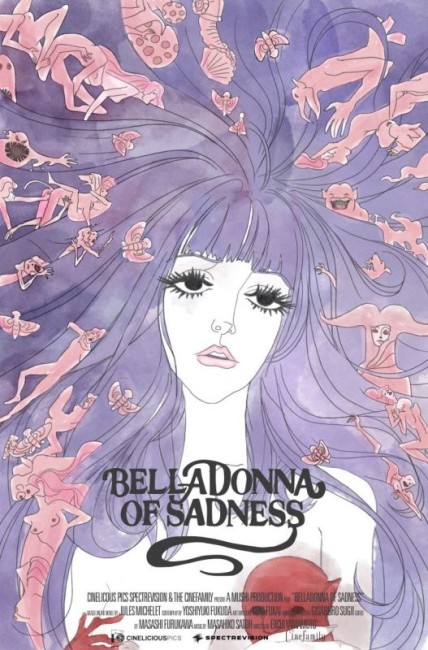 Jean and Jeanne are married. The Baron who owns the land in the area demands ten cows as tax from them for his permission to marry. Because they cannot pay, the baron takes Jeanne in lieu and ravages her. After Jeanne stumbles home, a tiny devil appears and erotically tempts her but she refuses its offer to sell her soul for power. Under the devil’s guidance, Jeanne uses her wiles to seduce and have Jean appointed tax collector. She becomes so powerful that she threatens the Baron’s rule. After the Black Plague strikes the area, the devil transforms Jeanne into a witch with the ability to heal the locals.

Belladonna of Sadness was made when Mushi was financially floundering – indeed, Belladonna of Sadness would be the last film Mushi would ever produce and the studio went into receivership the same year. As a result, the film is made with very limited animation – often just static watercolour artwork, even pencil sketches at times, or where only limited parts of the frame move. It often becomes an uphill push to watch Belladonna of Sadness through the stationary shots and lack of motion in many scenes. It is almost a film that seems designed to defy expectations anybody has of an animated film – it is hard to think of anything further removed from the artistic sensibilities (not to mention content) of Disney, Pixar, Blue Sky et al. Despite this, Belladonna of Sadness premiered at Cannes and has gone on to become regarded as a cult film in its recent revival.

For all its being held up as a groundbreaking work of sexuality that was before its time, Belladonna of Sadness also comes with some attitudes that are shall we say on the conservative side. It holds the association that for a woman to become erotically liberated (ie. to enjoy a role that is anything other than that of a dutiful wife) is equated with influence by and/or selling her soul to The Devil.

It is also a film that seems to require Jeanne to be in a state of undress whenever she is in peril – fleeing from a mob of villagers or about to be burned at the stake nude – which makes Belladonna of Sadness seem less like a cult work and pushes it far more into the arena of adult comics like Sally Forth (1971-4) and Oh Wicked Wanda (1969-78) whose heroines constantly seemed to end up in peril more so the villains could tie them up in state of undress.

I am also not quite sure what to make of the scene when Jeanne does give herself to The Devil and we get a frenetic montage of pop art images of modern Americana. Oddly enough, the film is based on La Sorciere (1862), a non-fiction work by French writer Jules Michelet that tries to explain witchcraft as a response to the cruelties of mediaeval feudalism.