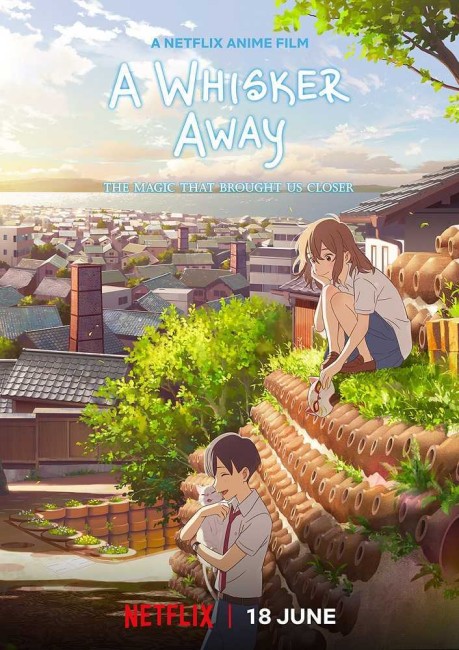 Schoolgirl Miyo Sasaski, nicknamed Muge, has a crush on fellow classmate Kento Hinode but he seems to ignore her no matter what she does. She then encounters a giant talking cat that sells masks. It offers her a cat mask and in placing it on, Muge turns into a white cat. In cat form, she is befriended by Hinode who names her Taro. He showers affection on her and regards her as his confidant. Muge comes to prefer life as a cat and her visits to Hinode as Taro. This also affects her life as a schoolgirl. She then finds that the mask seller has stolen her human face and left her trapped inside Taro’s body, while her human body is now taken over by Kinako, the cat belonging to Muge’s stepmother.

A Whisker Away was an anime film from directors Junichi Sato and Tomotaka Shibayama. Sato has made various anime films before, although none that ever surfaced on my radar, with the likes of Junkers Come Here (1995) and as Chief Director on the Keroro Gunso films and Sergeant Keroro 2: The Deep Sea Princess (2007).

A Whisker Away starts out seeming as though it is a standard tv anime. The character of Muge comes with a girlish skittishness that seems like we are going to be in for the adolescent silliness of a typical shoujo anime. The animation is simple and nothing too complicated – standard anime figures with big eyes often drawn in a few simple lines. This however is deceptive as the backgrounds of the film come with quite a degree of detail.

The initial girlish romance – where Muge seems to have the bizarre idea that gaining a boy’s attention involves doing cartwheels and throwing herself around and bumping into him – held no enthusiasm for me. However, from about the point that Muge obtains the mask and gains the ability to turn into a cat, A Whisker Away suddenly develops a great deal of charm. There is the sweetness of the relationship she as a cat develops with Hinode. It becomes an incredibly appealing watching this develop and the ways Muge’s secret life as a cat begins to affect her life as a regular schoolgirl. There’s a particularly affecting scene where one of the other pupils cruelly teases Muge by reading her letter to Hinode out in class and he responds by telling her to go away.

The latter half of the film becomes more of a body theft plot where Muge finds that the Mask Seller has given her body to a cat that wants to be a human, leaving her trapped inside the cat’s body. These sections involve the journey into a secondary world – the realm of the cats – and are of a familiar type to Japanese fantasy in anime like Oblivion Island: Haruka and the Magic Mirror (2009), Children Who Chase Lost Voices from the Deep (2011) and The Boy and the Beast (2015). Indeed, A Whisker Away has quite a number of resemblances to Studio Ghibli’s The Cat Returns (2002). Here the charms of the earlier bodyswap sections are swapped in favour of standard fantasy arcs of the young characters fighting against a clearcut villain.