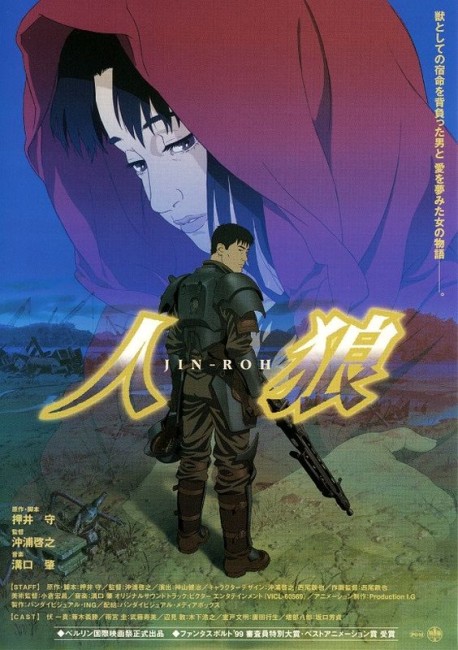 As Japan tries to reorganise itself after the end of the War, there is massive unemployment and unrest. A special squad, the Capitol Police Organisation, is formed to deal with increasing terrorist activities. One of the squad members, Fuse Tazaki, freezes when confronted with a terrorist that is a small girl. She then detonates a bomb, destroying herself. Ordered for retraining, Fuse meets the girl’s older sister at the graveside and becomes involved with her. She gives him a copy of the fairytale ‘Little Red Riding Hood’ and he is haunted by it, seeing himself as the wolf and she and the dead girl as Little Red Riding Hood. However, the sister is not as she seems, having been set-up by the city police to lure Fuse and disgrace the CPO in order to have the squad shut down.

Jin-Roh: The Wolf Brigade is both dazzling and ingenious and at the same time a terribly disappointing film. The quality of the animation is frequently breathtaking. Hiroyuki Okiura never offers any of the awesome vistas of mass-destruction that habituate the post-Akira (1988) films. Rather, Jin-Roh impresses in the smallness of its detail. An extraordinary degree of effort has been placed into making the military barracks and the city streets look like grimy, mundane post-War buildings – here you see the chipped paint, the sagging telephone wires, the wooden walls. It may well be an enormous folly sinking such detail into making a film look dull and mundane but it impresses every bit as much as any of the wild scenes of mass destruction in the likes of Akira or Legend of the Overfiend (1989).

What is equally dazzling about Jin-Roh: The Wolf Brigade is the metaphor it swings. Mamoru Oshii steals the central idea from The Company of Wolves (1984) and other films subsequently of retelling Little Red Riding Hood wherein the wolf becomes a werewolf. Oshii then reconstructs the metaphor to have Little Red Riding Hood become a terrorist and the wolf a member of an anti-terrorist squad outfitted with a machine-gun and a visor with glowing red eyes. Oshii inverts and plays with the expectations of the story in all manner of ways – he reverses the sympathies of the fairy-tale to have Little Red Riding Hood become a dupe for political machinations between competing law enforcement agencies and has the girl end up seducing the wolf rather than the wolf her.

In an equally intriguing move, Oshii and Hiroyuki Okiura create the social background that suggests everything takes place in an alternate history version of post-War Japan where Germany won the War – the cars on the streets are Volkswagens and when the hero reads a copy of Little Red Riding Hood the text is in German. This is never commented on any further than this and intriguingly suggests all manner of things.

The downside of this is that what is assembled is a fascinating film – beautifully animated and ingenious in the ideas it toys with about reworking the werewolf myth and fairy-tale. On the other hand, Jin-Roh: The Wolf Brigade is coiled up – one keeps expecting it to break out into epical destruction or intensive action – but it never does. It becomes clear that the film is intended as an interior mood piece but one never gains any insight into the troubled soul of the hero.

After the Little Red Riding Hood fairytale is raised, the idea almost becomes almost too strong for the film and the metaphor gets lost amid a plot of murky political machinations. It is never too clear what is going on amid the far too convoluted strands of metaphor. You are never sure whether the film is talking about wolves and werewolves literally or metaphorically – we never see any werewolf transformations, for example. The secret squad of werewolves are cryptically mentioned throughout and then, to considerable puzzlement about what is happening, emerge as a major plot element at the end.

The result is a film that raises greatness – in terms of its both art and ideas – but almost entirely avoids any of its potential. It keeps promising to but never explodes out into action; it raises metaphors of werewolf and fairy-tale but we never see any werewolves. Frustrating.

Jin-Roh: The Wolf Brigade enjoyed reasonable acclaim at film festivals around the world. The surprise about it is that Hiroyuki Okiura never capitalised on this to make another film up until the sweetly genteel A Letter to Momo (2011), also under the Production I.G. banner.