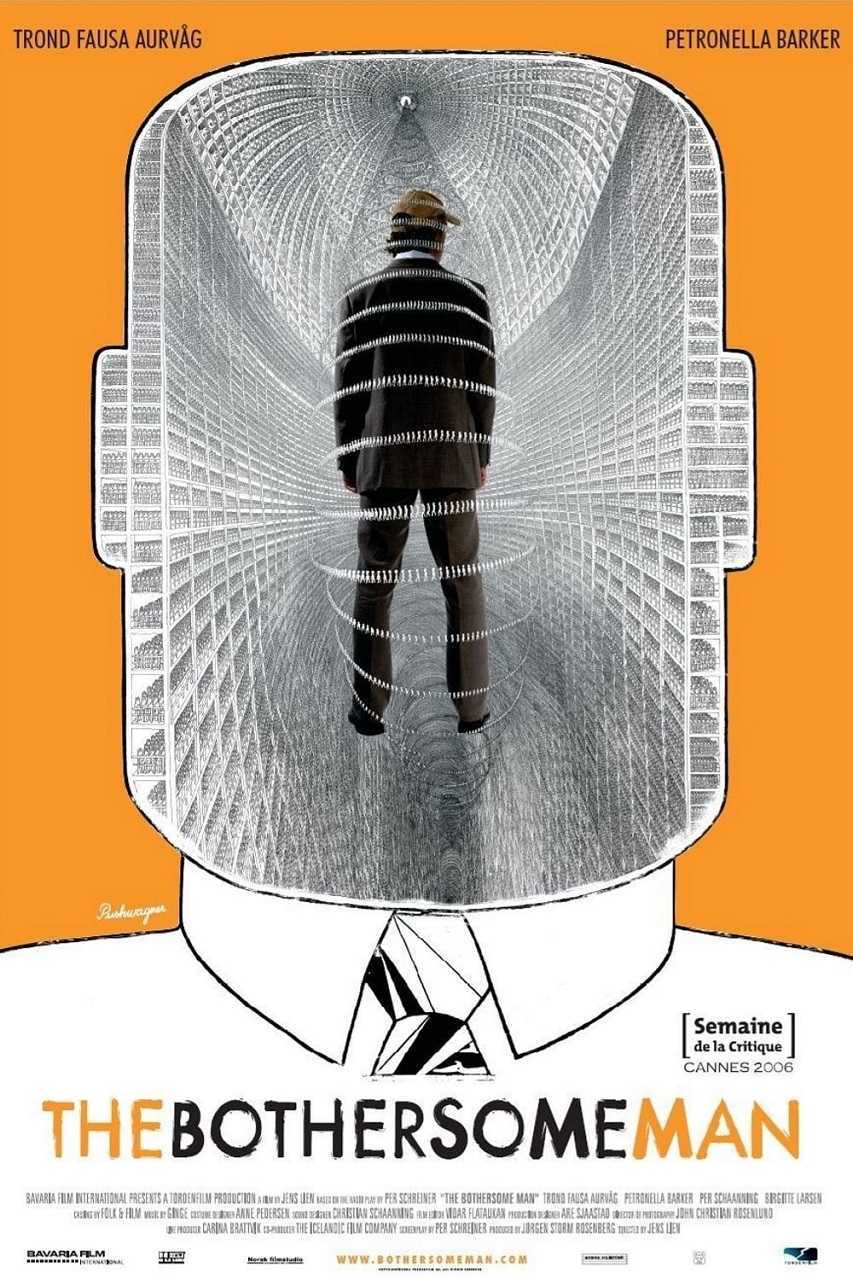 Andreas Ramsfjell commits suicide by jumping off a subway platform in front of an oncoming train. He comes around to be delivered by bus to a small outpost in the middle of nowhere. He is taken into the city where there is an apartment and a job as an accountant waiting for him. Andreas’s co-workers prove perfectly friendly and always concerned for his happiness. Andreas also finds that in this world there are no children, that many familiar foods have no taste and that no matter how much alcohol one drinks they cannot get drunk. He takes up and moves in with Anne Britt after meeting her at a dinner party but soon finds that she is completely obsessed with interior decoration. He has an affair with co-worker Ingeborg and leaves Anne Britt for her, only to find that Ingeborg sees many men and prefers none more than any other. He tries to jump from a train platform again but finds that no matter how many times he is run over by a train he cannot be killed. He then discovers a man who has a basement apartment where there are real smells, music and the sounds of children coming through a crack in the wall. And so Andreas determines to tunnel through to the other side of the wall.

The Bothersome Man was the second film from Norwegian director Jens Lien. Lien had previously made a number of short films and one other feature with Johnny Vang (2003).

The Bothersome Man taps into a sense of very black humour that is frequently called uniquely Scandinavian – something that is mordant, almost hysterical in its deadpan understatement and bleakly pessimistic in the face of matters like death. If you want to make filmic comparisons, you could perhaps call The Bothersome Man something like Albert Brooks’ afterlife comedy Defending Your Life (1991) as directed either by Swedish director Roy Andersson of Songs from the Second Floor (2000) and You, the Living (2007) or Denmark’s enfant terrible Lars von Trier in the blackly comic tone of films like The Kingdom (1994) or The Boss Of It All (2006). Or perhaps the film that the very similar American-made Wristcutters: A Love Story (2006), which came out the same year, should have been.

The Bothersome Man is set in an afterlife that seems very much like the world that we are used to – people live in apartments, work in offices, drive modern cars and the like – but one that comes with an almost imperceptible sense of disquiet. It is the modernist city as anti-utopia – one where everything comes cleanly and blandly lit, where people seem to spend just a little too much time discussing interior decoration or being concerned for Trona Fausa Aurvaag’s wellbeing.

There is a very oblique sense of black humour lurking beneath it all – the man who removes the ‘welcome’ sign at the outpost in the middle of nowhere before Aurvaag has even properly arrived; the body fallen impaled on a series of railings with its entrails hanging out as people walk past in the street. This soon starts to reach the positively hysterical. Trona Fausa Aurvaag announces to Petronella Barker: “I’m going to leave you,” which gets the perfectly calm response “But we have guests Saturday … Are you going to leave before Saturday?” The announcement that he wants to move in with Brigitte Larsen and the conversation he has in trying to pin her down and say that she prefers him to all the other men comes with equally funny regard. The scene where Aurvaag tries to jump from the underground platform and survives being run over by a train, only to keep being run over by other trains as he gets up bloodied and broken is absolutely side-splitting.

At no point does the film ever come out and let us know for certain that we are in the afterlife. For that matter, we are never ever told the reason behind Trona Fausa Aurvaag initially wanting to commit suicide – in that he sees the same couple making out in the background on the same platform both times he jumps in front of the train, you could perhaps construct some kind of theory that he is caught in a Groundhog Day (1993)-like timeloop.

In many ways, you can read The Bothersome Man as an allegory about malcontents in Utopia. Various Scandinavian societies are often pointed to as the ideal model of a liberal society that maintains concern for the welfare of all its citizenry. By the time of the scene near the end where the elders of the subtly disquiet utopia come and look on Trona Fausa Aurvaag with disappointment, you can also read the film as one where a person is lamenting their inability to fit into a perfect society that feels like it has done everything it can to accommodate him and make him happy, but which has also become stifling in the banality of its conformity.