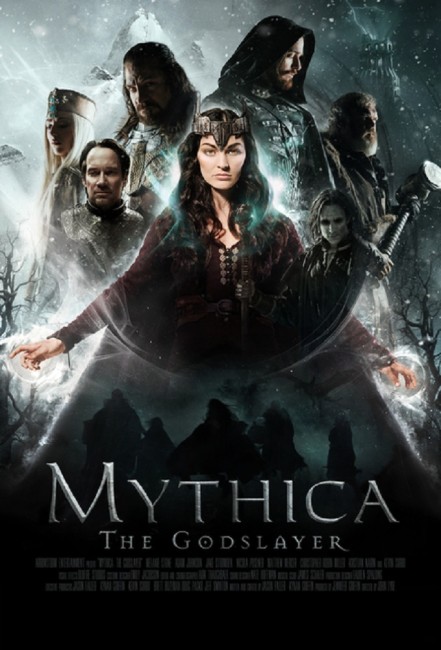 aka Mythica: The Dragon Slayer

The sorcerer Szorlok rampages across the land, raising the dead as zombies. Thane marshals soldiers in an attempt to defend the cities. Marek and Dagen return with the Iron Crown and decide the only means to defeat Szorlok is for them to locate the hammer of Tek, the only god to ever be killed. This requires Dagen and Thane to kill themselves and enter the afterlife in search of Tek and his hammer. Meanwhile, in an effort to hold Szorlok back, Marek decides that the only option is for her to accept his offer to cross over to the dark side.

This was the fifth and last of the Mythica films from Utah-based production company Arrowstorm Entertainment. The other films consisted of Mythica: A Quest for Heroes (2014), Mythica: The Darkspore (2015), Mythica: The Necromancer (2015) and Mythica: The Iron Crown (2016). I have been consistently impressed with the series for taking the essential tropes of the Epic Fantasy that had been established by The Lord of the Rings and doing a fine job of creating an original screen series.

The peak of the series was the previous entry Mythica: The Iron Crown under director John Lyde who did some highly imaginative things with the action set-pieces. Lyde returns here. The Godslayer also runs the longest of the series – while most of the other films run to a standard 90 minutes or thereabouts, this comes in at 1 hour 58 minutes, just short of a two-hour runtime.

The quality the series reached with The Iron Crown and the extended runtime given over to this entry leaves you with the anticipation that The Godslayer will be the epic that rounds out the Mythica series. It is not quite that. Lyde never quite pulls off the same epic action set-pieces on a low budget that he did in The Iron Crown. Like the later Harry Potter films and the films of the so-called Snyderverse, John Lyde reduces the lighting levels of the film so that much of the show seems to be taking place at night in contrast to the earlier films, which takes place outdoors in the desert during daytime. This gives the film much more of a sombre look while the action and drama is much quieter in tone. It is certainly not an uninteresting effort but not quite the best of the series one was expecting it would be. Although you do suspect with a little judicious editing, the runtime could have been cut down the same length as the other films.

This also places the much more emphasis on character. Like the Star Wars prequels, a strong part of the story arc is about Marek going over to the dark side – although there is too much dithering about whether her doing so is faked or genuine and offers of supernatural aid for this to be the big moral dilemma it should have been. Better is the arc where Thane and Dagen enter The Afterlife to obtain the hammer of a god (played by Kristian Nairn, better known from tv’s Game of Thrones (2011-19) as Holdor) and then try to return to their bodies.

The film started out subtitled Mythica: The Godslayer. Quite possibly such a title was considered too blasphemous for the Utah filmmakers – many of whom would probably be Mormon (John Lyde, for instance, has made Mormon-themed films). The subtitle was then changed to the more innocuous The Dragonslayser, despite the fact there are no dragons present in the film.