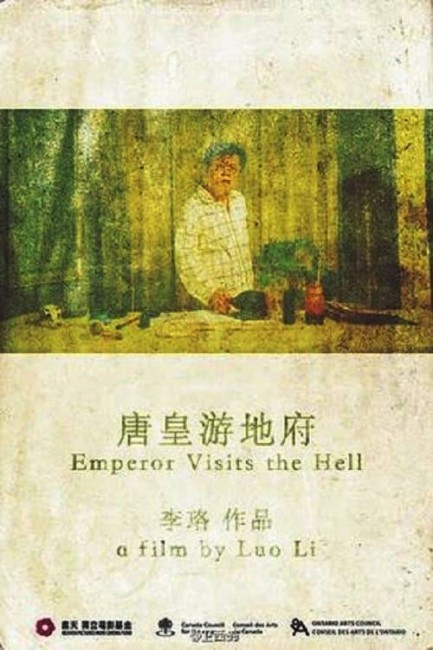 Director/Screenplay/Producer – Li Luo, Based on Journey to the West, Photography (b&w) – Ren Jie.

In the 7th Century, Li Shimin became one of the most powerful emperors in Chinese history. The Dragon King goes to a monk that can tell the future and asks for predictions of tomorrow’s weather. He makes a bet with the monk that he must leave if he is wrong. The Dragon King then uses his connections in Heaven to alter the weather and win the bet. This has serious consequences and it is decided up in Heaven that the Dragon King’s head shall be forfeit. The Dragon King goes to Emperor Li Shimin and begs help. The Emperor attempts to divert the heavenly executioner from his duty at the appointed hour by distracting him with a game of Go but fails in his attempt. The Emperor then becomes troubled by ill health and sees ghosts everywhere. He dies and goes to Hell. There Heavenly bureaucracy is altered to allow him to return to the world of the living, although it is decided that he must first atone and kowtow to the ghosts of all he has killed.

Emperor Visits the Hell is not unakin to works like Orphee (1950), Black Orpheus (1959) and Freeway (1996) that each takes a classic myth or fairytale and reinterprets it by presenting the story in modern day surroundings. The amusing conceit of Emperor Visits the Hell is that the traditional story remains the same – there is a journey between the heavens, Earth and the afterlife, featuring various gods and traditional characters from Chinese legend – but the telling remains strictly contemporary.

This leads to some highly amusing interpolations – the Dragon King is now a petty mobster who runs his operations out of a pool hall/bar; the emperor is a traditional calligrapher whose court consists of corporate offices; ghosts that are said to wander the grounds of the palace look like ordinary individuals out for an evening stroll in the gardens and so on. This makes for particularly striking contrast to the abovementioned adaptations, which blow the story of Journey to the West up into a full-blown fantasy. By contrast, Emperor Visits the Hell goes 180 degrees the opposite way to portray the elements of traditional fantasy in a way that is wholly mundane and everyday. The results are undeniably appealing.

Li Luo has shot the film is a very low-key way. It is not a film of big dramatics or confrontations, just one that has fun in seeing the incongruous interpolations of a traditional legend played out in a present-day setting. There are undeniable amusements to the scenes with the emperor having to deal with heavenly bureaucracy or trying to prevent the death of the Dragon King by calling the heavenly executioner to his offices and distracting him over a game of Go.

This does lead to some undeniable and striking political ramifications – of a world where everything is dominated by petty gangsters, corporate executives and a lumbering bureaucracy – where Li Luo seems to be wanting to make some commentary on the current state of China. When the equivalent of the monk Xuanzang/Tripitaka (the hero of Journey to the West) does turn up towards the end of the film and is about to set out on his journey into the West, for instance, this comes filtered through the additional problem of his needing an exit visa to leave China.

Indeed, the end of the film consists of a scene where Li Luo has turned his camera on the film’s wrap party and the actor playing the emperor drunkenly breaks character and begins to remonstrate about the futility of arts funding in China – a scene that in any other film would end on the cutting room floor but here becomes a point about the state of contemporary China.