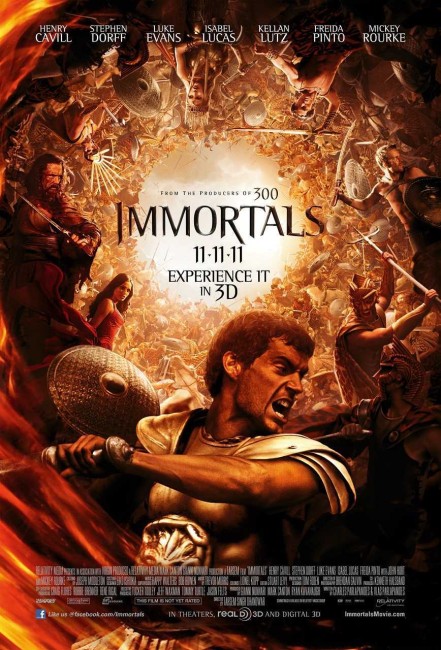 1228 B.C. King Hyperion declares war against the gods and sets out to find the Epirus Bow, with which he intends to free the Titans from captivity on Mount Tartarus and unleash them against the gods. With his army, Hyperion searches the land for the bow or the sibylline oracle that can direct him to it. The peasant Theseus returns home just as Hyperion slaughters his mother Aethra. He is captured and sent to the salt mines. There Phaedra, the oracle that Hyperion is searching for, brushes against Theseus and has a vision. She contrives to free Theseus and escapes with him and several other slaves. As he buries his mother, Theseus discovers the Epirus Bow hidden in the crypt. Watching over everything is Zeus and the other gods of Olympus. Although Zeus has had his eye on Theseus for some time, he has forbidden the gods from direct involvement. They are forced to intervene as Hyperion captures the bow and marches on Tartarus to free the Titans.

Given the huge popularity of epic fantasy on the big screen during the 00s – the Lord of the Rings trilogy, the Narnia films, the Harry Potter series etc – it is surprising that few filmmakers have expressed much interest in touching the Greek myths. The only effort prior to this point was the remake of Clash of the Titans (2010), which almost certainly inspired the production of Immortals, which at one point was given the soundalike title War of the Gods. Outside of that, one would have to stretch to efforts such as the tv mini-series Hercules (2005) or the dull, modernised Harry Potter copy Percy Jackson & the Olympians: The Lightning Thief (2010). There was the adaptation of The Iliad with Troy (2004) but that stripped all gods and fantastic elements out of the telling and presented the story as purely an historical epic. To the opposite extreme, there was Zack Snyder’s 300 (2007), which was based on an historical battle rather than any Greek myth but was given such a visually extravagant treatment that it became a work of fantasy. Immortals tries to establish its connection to 300 by noting that it is from (two of) the producers of that film. (Certainly, a couple of years later this changed slightly with the twin versions of Hercules (2014) and The Legend of Hercules (2014) both coming out the same year).

One thing that does become apparent in contrasting Immortals to the original Greek myth of Theseus is that the film has taken what it wants and discarded the rest. To wit, about all that Immortals has is in common with the legends of Theseus is the fact that he had a mother Aethra and that he consorted with a woman named Phaedra. In the film, Theseus is born after his mother is raped (it is not ever speculated by whom) and has no abilities other than human heroism; in the Greek legends, Aethra slept with both his natural father and the god Poseidon on the same night leaving Theseus with demi-god-like powers. Notedly, while the film refers to Theseus as a peasant and a slave, he was the son of a king according to the myths. The classic story of Theseus concerns his journey to meet his father and the uncovery of the six entrances to the underworld, followed by his battle to become the king of Athens.

The most famous tale among these is Theseus’s venture into the Labyrinth of King Minos to fight the minotaur. There is a minotaur and a labyrinth of sorts here, although the minotaur more mundanely appears as a man wearing a bull-shaped mesh mask and there is no King Minos. Equally, Phaedra was Theseus’s second wife. She is never portrayed as an oracle in the legends – she was the daughter of King Minos who aided Theseus in navigating the labyrinth along with her sister, after which Theseus took both of them home, abandoned the sister and married Phaedra. Indeed, Phaedra’s largest footnote in Greek myth is the story of how she fell in love with Hippolytus, Theseus’s son from his first marriage, and ended up killing herself and driving Theseus to kill his son. There is also no King Hyperion in Greek myth; instead, Hyperion was one of the Titans.

It is essentially a case of the film’s script having thrown out the more complex Greek myth and written a generic Hollywood adventure with a hero, a love interest, a villain and epic battles. But then Hollywood always had problems with the Greek myths as written – having to make the heroes a lot less profligate in terms of their multiple seductions of women (and a fair number of men as well), while making the women far more black-and-white – Medea in both film versions of the story of Jason, Jason and the Argonauts (1963) and Jason and the Argonauts (tv, 2000), for instance, becomes merely a standard romantic lead rather than someone who murdered her own children out of vengeance after Jason abandoned her for another woman.

Immortals ws the most high-profile film to that point from Indian-born director variously known as Tarsem Singh or simply Tarsem – listed here as Tarsem Singh Dhandwar. Tarsem gained a reputation for his music videos and commercials during the 1990s, particularly with the award-winning video for REM’s Losing My Religion (1991). Tarsem made his directorial debut with the serial killer film The Cell (2000), which was given amazing life through his attention to elaborate costuming, sets and extraordinary visuals that replicated the works of various artists. Tarsem next self-funded The Fall (2006), an amazing work of myth that is fascinating not so much for its story as it is for the fact that Tarsem filmed in eighteen countries around the world, using natural locations and architecture instead of visual effects and in ways that gave them an extraordinarily fantastical and otherworldly life. Tarsem subsequently conducted a version of the Snow White fairytale with Mirror Mirror (2012), followed by the disappointingly average bodyswap film Self/less (2015) and the reworked Wizard of Oz tv series Emerald City (2017).

In making Immortals, there seems to have been the clear intention of producing another 300 and looking to Tarsem to create out-of-this-world visuals in the way that only he can. Tarsem excitedly described Immortals as a work where he employed the styles of Renaissance artists in a modern action environment – “Caravaggio meets Fight Club (1999),” he called the film.

As always, Tarsem has lavished everything on the pure beauty of the costumes, sets and colour schemes. Freida Pinto and the priestesses of the oracle are decked out in a series of highly-ornamented scarlet red burqas. Tarsem offers up shots of what looks like an ornate metal mask before it is revealed to be a boat being rowed. He covers Henry Cavill and the escaped slaves in black oil from the sea solely for the effect it offers. The gods come garbed in gold and a series of electrifying moves, including Zeus wielding a flaming whip. Or the final shot with Theseus’s son looks up into the heavens as the camera pulls back through the clouds to show hundreds of gods and titans fighting in the sky like something out of one of Michelangelo’s frescoes for the Sistine Chapel. The sets are an extraordinary mix of colour schemes and patterns designed to capture the eye – Tarsem shoots a battle scene with armies clashing inside a long narrow corridor purely for the visual effect of it.

Most of all, Immortals is the first 3D film since Avatar (2009) that makes use of the 3D environment to do something with other than keep popping novelty items out of the screen. The entire film has been composed in a way where the various plate elements of each set and scene have been carefully digitally tweaked to exist at layered depths or where Tarsem places his camera inside the architecture of the sets to gain unusual perspectives. Like Avatar and the The Walk (2015), it is the only other film of the 2009-present fad for 3D overkill that demands to be seen in 3D.

The principal downside of Immortals is that it is more a film based around the visuals than it is ever a work of drama or indeed action as the highlighted “from the producers of 300” connection leads one to expect. Certainly, Tarsem gets it together for an invigorating epic-sized climactic battle with armies massed outside the city and the Olympian gods taking on the Titans in hand-to-hand combat, splattering and tearing them apart in a series of revved-up moves. Here Immortals finally bursts out of its somewhat moribund narrative and starts to fly – but you wish the film had done far more of this earlier on.

Equally, Tarsem and the scriptwriters have made an effort to portray the Greek gods in ways unlike we have seen them on screen before – thus the gods are far more human and vulnerable (most of them are killed throughout) and we find they are bound by a Prime Directive that forbids interference in human affairs, which they never are in the myths or any other screen version.

The main problem Immortals has is not a particularly enlivened plot. It seems generic and it is only Tarsem’s visuals that give the film its life. Characteristically, Tarsem is a director who seems far more interested in the look of a film than he does in his actors. Henry Cavill (just before becoming Superman) is suitably body-sculpted and heroic, while Freida Pinto looks impossibly beautiful, but there is not much beyond that to either of them as characters.

The one appearing to be having the most fun is Mickey Rourke cast as the evil king who keeps doing the old Darth Vader standby of killing acolytes who fail him. Since his comeback in the last few years, Mickey Rourke has shucked the boyishly macho sexiness that defined his performances of the 1980s and early 90s and emerged as someone with features so battered and weatherbeaten they now seemed carved in granite and with an attitude that has gone way beyond pouty bad boy to resemble something of the tough guy lethality that Danny Trejo usually plays. Here, Rourke does not have much of a role but takes the opportunity to entirely upstage the show in every scene he appears.