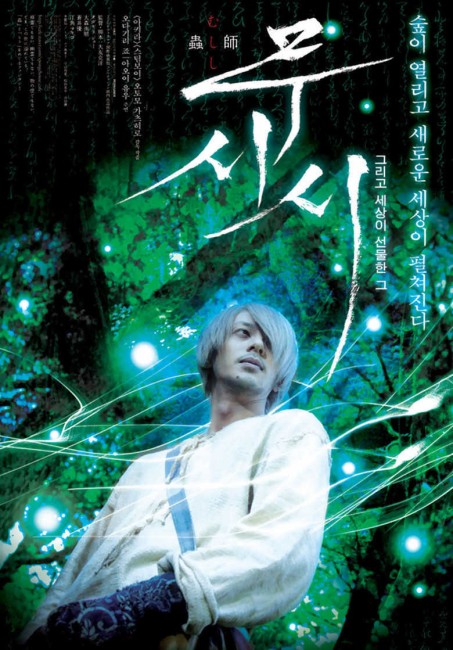 Ginko, a mysterious stranger who has silver hair that always covers one eye, arrives at a snowbound inn in Japan. He introduces himself as a mushishi (or bugmaster) who has the ability to see mushi (spirits) and possesses arcane knowledge of how to deal with them. He is able to free the residents of the town from an infestation of Ah and Un spirits that feed upon sound and cause the townspeople to become unable to hear. The innkeeper takes him to meet a young girl Maho who has a severe manifestation of mushi after having taken one of the horns from the body of her late mother. Ginko has no memory of who he is or even his name. Born Yoki, he was found abandoned and adopted by a female mushishi Nui but lost his memory after her encounter with a mushi that inhabited a pond. He is joined by Koro, a man who seeks the ultra-rare rainbow mushi. He now travels on to aid Tanyu, a girl inhabited by a mushi that she is able to gradually spill out onto scrolls as ink by telling the stories she hears of other mushi. Now however, the mushi all escape the scrolls where she has imprisoned them and Tanyu comes down with a fatal ink infection.

Katsuhiro Otomo will always be known as the director of Akira (1988). Starting out as a manga writer and artist, Otomo made his directorial debut with segments of the anime anthologies Neo-Toyko (1987) and Robot Carnival (1987). He then made his feature-length appearance directing the film version of Akira, adapted from his own weekly manga that ran from 1982-90. Akira was a massive success and an international breakthrough that popularised the cult of anime in the West.

Otomo was slow to follow up on the success of Akira however. He was involved in various capacities on several other anime – Roujin Z (1991), Perfect Blue (1997), Spriggan (1998) and Metropolis (2001) – but only directed one-and-a-half other films, the live-action World Apartment Horror (1991) and an episode of the anime anthology Memories (1995), during the next decade-and-a-half. Sixteen years after Akira, Otomo returned with the epic Steampunk anime Steamboy (2004), which was followed by the live-action Bugmaster here and the Combustible episode of the anime anthology Short Peace (2013).

With Bugmaster, Katsuhiro Otomo adapts someone else’s manga – in this case, Mushishi by female manga artist Yuki Urushibara, which ran from 1999 to 2008. Just prior to Otomo’s live-action adaptation, the manga was also adapted into an anime tv series Mushishi (2005-6), which lasted for 26 episodes. I haven’t read the manga or seen the anime but what Bugmaster reminds of is the underrated Warlock (1989) wherein a then unknown David Twohy created a fascinating world that asked what would happen if there were a witchcraft made up out of folk remedies and old wives tales. There is a similar sense behind Bugmaster, of taking aspects of Japanese folklore and mythology seriously – spirits that feed on noise, inhabit people’s ears and leave them deaf; a little girl growing horns after taking them from her mother’s body; spirits that inhabit the rainbow and so on.

Unlike Katsuhiro Otomo’s work in anime, which is usually focused around a sense of epic scale and constant spectacles of mass destruction, Bugmaster is an altogether quieter film. It has a 131-minute running time and proceeds much more sedately. Indeed, less than a spectacle of mass destruction or a horror film, Katsuhiro Otomo delivers something that resembles more of a traditional Japanese period film. As a film about exorcism, Bugmaster sits at almost 180 degrees remove from The Exorcist (1973) and its ilk. Where they rest in a Christian dialectic about the battle between good and evil, Bugmaster‘s cosmology is more Eastern in its outlook, more about harmony with nature.

Within this, Otomo certainly produces a number of striking set-pieces – indeed, it is these set-pieces that drive the film more than anything else. Images like Jo Odagiri lying down to sleep whereupon tendrils from a seashell appear, crawl across the floor to cover and then enter his body through his nose; Reia Moriyama being swarmed by hordes of bugs in her room; the entry into the library to see that the ink spirits have escaped from the scrolls and are crawling around the walls en masse; the character of Tanyu covered in ink, her leg and arm blackened and withered, resulting in the ink having to be bled out in a bath; the flashback scene where the young Ginko enters the river with Makiko Esumi as she surrenders to the mushi there and he is dragged in too and left floating in the light halfway between worlds; seeing Yu Aoi capturing the stray ink spirits from the wall with a rod, whipping them off and flinging them back onto the waiting scrolls.

The main problem with Bugmaster is that it is episodic. One suspects that this is Katsuhiro Otomo being too faithful to the source manga – he has adapted four different stories that were originally told as self-contained individual issues of the comic-book. As a result, the story simply follows Jo Odagiri’s Ginko through a series of encounters. Aside from the issue of his backstory, the film has a sense of meandering lack of drive and there is not much of a through story that connects the episodes – we follow Ginko as he deals with various individual spirits but there is no larger nemesis that he must face throughout as you would probably get were this a more Hollywoodised film.