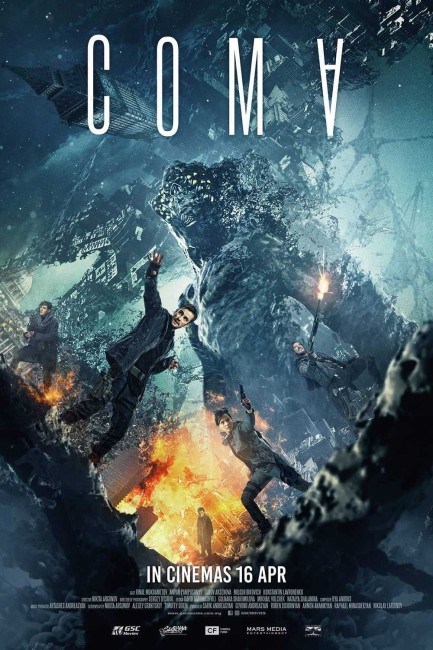 A man wakes up in a strange realm with no memory of who he is. The world all around him is topsy-turvy, made up of partial buildings sitting on floating islands in mid-air or at 90 degree angles to one another and where people and objects are in the process of dissipating into dust. The man is attacked by a monstrous entity but is saved by a group of people. They explain that all of them are in comas and that this is a shared realm built out of their memories. Objects only partially exist because that is the way people remember them. The creatures, The Reapers, are forces in the outside world that can turn off their life support and extinguish them. The group are searching for an island in the realm that is not connected to any other place thus is inaccessible to the Reapers. In the course of learning about this strange new world, the man discovers that he was an architect in his previous life and that he has the ability to create structures out of thin air.

Coma was a directorial debut for Russian director Nikita Argunov. Argunov had worked in visual effects on various Russian films since the mid-2000s. He had previously written the screenplay for Games Among Adults (2011) and produced Mafia: Survival Game (2016) and the Russian superhero film The Guardians (2017). The expertise in the effects, the creation of the world and the conceptual strength of the story makes surely Nikita Argunov a Russian rival of Christopher Nolan.

I knew little more about Coma other than reading a synopsis before sitting to watch. This is the best way to watch the film – going in with no preconceptions allows you to experience it for the extraordinary work that it is. This becomes evident a few moments in as Rinal Mukhametov wakes up in the realm and sees the edges of objects in the apartment crumbling into dust. He then exits into the streets to find an M.C. Escher-esque topsy-turvy world with building folded over and at right angles to others like something out of Inception (2010) or where vehicles, parts of buildings and even passers-by shed wisps of particulate matter as they slowly disintegrate into dust.

This becomes even more fascinating with the introduction of the rest of the group who take Rinal Mukhametov on a bewildering journey through the city – leaping between pieces of the buildings floating on islands or where they jump upwards onto a building that is upside down overhead. Or of airplanes stilled in mid-air and submarines that exist with the illusion of water above the group’s heads as they pass beneath. Elsewhere we have a bus that shows a different landscape through each window as the party move through it. Even more imaginative is the dreamscapes entered into at the end – an office that opens out onto a waterfall, hospital rooms that morph into beaches, colonnades where the season and time of day shift as people pass along them. The design work and the visual effects gone into producing this world are absolutely extraordinary.

Where Coma works is not just in its visuals but that Nikita Argunov keeps expanding out from the premise and exploring the rules of the world around them and the pieces of drama among the group inside the realm. Halfway through, the film develops a Conceptual Breakthrough twist that spins everything on its head as the true nature of the world they are in becomes apparent.

Coma should not be confused or is in any way related to the Michael Crichton medical conspiracy film Coma (1978) or its tv mini-series remake Coma (2012).