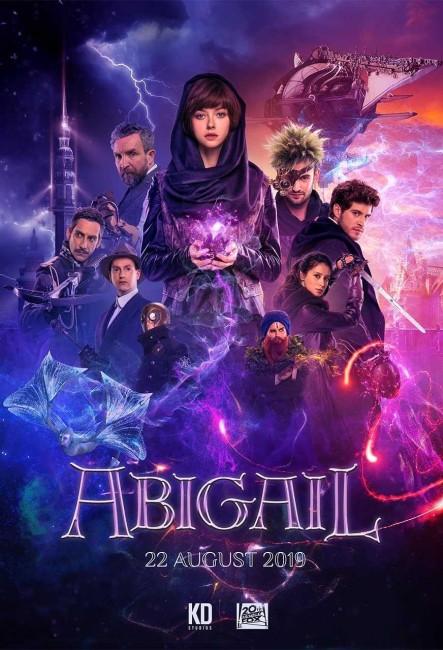 It is 96 years after the city of Kensington has been built with a vast wall protecting it from the outside world. Those inside are taught to be fearful of a plague. The city is policed by The Inspectors who are equipped with devices that allow them to detect infectees who are then dragged away and expelled from the city. Young Abigail Foster is witness as her father Jonathan, an important scientist with the government, is taken away by The Inspectors. Ten years later, Abigail has grown into a young woman. After a friend of hers is arrested by The Inspectors, she encounters a rebel underground. Among them, she is amazed to find there is no plague – that many in the city have natural magical abilities and that The Inspectors are determined to stamp these out. She also discovers that she is one of those people with magical abilities. She is sent to the rebel leader Bale to be trained. As Bale prepares a revolution against The Inspectors, Abigail discovers that her father has left her a secret map to the prison that lies outside the city where all those with magical abilities are being held.

Abigail was a big-budget Russian-made film. Alexandr Boguslavskiy had previously co-directed the SF tv series The Day After (2013-6) and co-directed the superpowers film Beyond the Edge of Reality (2018).

The film creates an interesting and original almost familiar world – the cars come from sometime in the 1930s, the uniforms are imperial East European and yet there is also magic. This also sits alongside a number of Steampunk Films elements, including the rebels being outfitted with nifty devices that enhance their power. The last quarter of the show is taken up by the swashbuckling element and some impressive airship action scenes.

I kept being reminded of the recent tv series Carnival Row (2019- ), which did similar things in having an almost familiar Victorian world that had been blended with magic and magical creatures. The main difference is that Carnival Row, while by no means a great show, at least did a passable job in its worldbuilding whereas the world here lacks much depth or implied history/mythology that extends beyond the frame.

The major issue I have is one I do with several other fantasy works – Harry Potter is a perfect example – and that is that there seems no constraints on the magic – when we see it so prevalent to the point it is being wielded by stallholders in the street, it simply becomes too powerful. Magic works best when there are some rules and constraints on its usage otherwise it simply becomes a story in which anything can happen.

In many ways, the story here could easily be a Young Adult fantasy. It covers all the essential tropes – the young heroine who has power and knowledge that makes her unique; the romance with the guy; her stand against an evil authoritarian regime; her leading a revolution against the regime seemingly by her goodness alone. It also feels as though the film is making a subtly coded critique of Russia’s former Communist regime – the evil dictatorial city state is one that wants to enforce a dictum that everybody be equal, requiring that people suppress their natural abilities to do so, while the revolutionaries are fighting in favour of people being allowed to be free and be their natural selves.

The biggest problem I had with Abigail was the fact that the only copy I could find to watch was an English-language dubbed version. (My preference is always for subbed copies as it most represents the creator’s original vision). This unfortunately appears to have been conducted by a cut-price US animation company with frequently grating results. Certainly, they do a reasonable job in matching lip movements. However, it is clearly done by a group of voice actors who are used to delivering their vocal performances for animation where emotions are simplified and over-emphasised, something that simply does not suit live-action performances. The voice actors are not credited but whoever voices the role of Abigail, a character who seems around the age of twenty, makes her voice sound like a twelve-year-old girl.