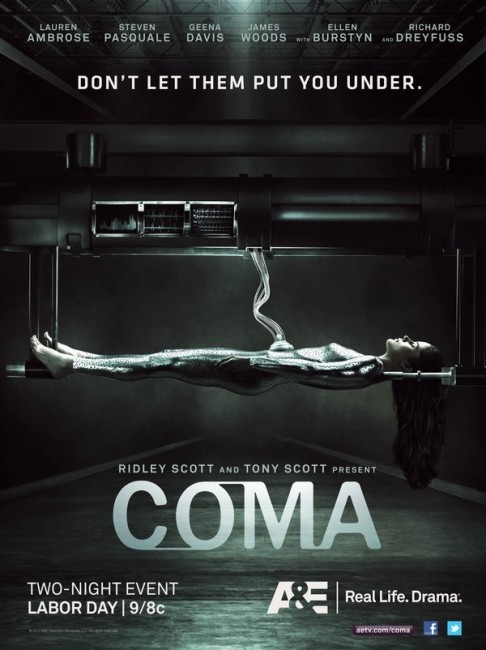 Medical student Susan Wheeler is chosen for a surgical internship at Atlanta’s Memorial Hospital. Susan is puzzled when first a woman she knew at her swimming pool and then a patient who came onto her both go into comas during surgery despite being perfectly healthy. Digging about, Susan finds that number of patients going into accidental surgical comas at Memorial is well above the national average. The comatose patient are being taken to the mysterious Jefferson Institute that claims to offer state of the art care for patients in highly vegetative states. Joined by her superior and later lover Dr Mark Bellows, Susan finds that those who aid her investigation are being fired, forced out of the hospital and even murdered. As the people behind the cover-up start threatening the two of them, Susan uncovers how doctors at Memorial are deliberately putting people into comas to use as subjects in a series of illicit medical experiments at the Jefferson Institute.

The original Coma (1978) was a film from Michael Crichton. At the time, Crichton was riding on the success of the film adaptation of his novel The Andromeda Strain (1971) and had then made his directorial debut with Westworld (1973). Crichton had originally trained as a doctor before branching out into writing novels and directing and so Coma seemed a logical choice as his second directorial outing. The film was adapted from Coma (1976), the second novel of former doctor Robin Cook who went onto a career churning out a series of near-identical medical thrillers. Genevieve Bujold starred as Susan Wheeler and Michael Douglas was Bellows. Coma 2012 is a tv mini-series remake of the Michael Crichton film and the Robin Cook novel. It was mounted by the Scott Free production company of brothers Ridley and Tony Scott and directed by Mikael Salomon. All three had previously combined on the tv mini-series remake of Michael Crichton’s The Andromeda Strain (2008).

I had both read Robin Cook’s original novel and seen the Michael Crichton film, which kept closely to the book. As a result, Coma 2012 became intensely annoying to me. It messes with the originals in the same way that Salomon and Scott Free’s adaptation of The Andromeda Strain did, needlessly extruding and over-padding a story that worked tightly in its original form. This version has a longer running time than the much leaner original by necessity of being a mini-series but you keep wondering why they had to change so much of it. While the first Coma film was groundbreaking in its clinical focus, the medical drama has been overdone by other tv shows of the last two decades – see the likes of Chicago Hope (1994-2000), ER (1994-2009), House M.D. (2004-12) etc – and the remake feels only like Mikael Salomon is drawing on the tried and familiar cliches.

Some updates are made to the story, although surprisingly fewer than one might think. One canny touch is dragging the Jefferson Institute into the era of the American medical insurance nightmare – where the institute’s offer is seen as a welcome alternative to relatives having to bear the cost of paying for their loved one’s healthcare. (The world of medical insurance was something that never seemed to occur to Robin Cook). The nature of the Jefferson Institute has been expanded from an organ harvesting operation to one where bodies are being recruited for off the radar medical research operations (although we do later see that they are being carved up and their organs sold).

The mini-series also changes the relationship between Susan and Bellows and has them get together during the course of the mini-series, whereas in the book and film they were a couple before the frame of the story had even begun. This plays into the need to add a romantic element to a story – even so, Mikael Salomon lacks any interest in exploring this aspect of the story. Susan also gains a pointless background as the daughter of a prestigious family whose grandfather was one of the high-ups at the hospital.

One of the worst changes in the mini-series is the depiction of the conspiracy at the hospital. It seems one that is organised by the world’s most inept conspirators. All around Lauren Ambrose, they contrive to get nurses who give her information access fired, have her roommate dropped from her program, force the family of the doctor who commits suicide to leave town, before escalating to murdering people. Everything it seems other than actually targeting the two people trying to expose the conspiracy – where surely employing some of these methods and silencing Susan and Bellows would have shut the investigation down almost instantly.

The worst addition to the story is that of Michael Weston’s psycho handyman where we get extended scenes of him pursuing Lauren Ambrose through the hospital in the second half. There is the suggestion that Geena Davis’s psychiatrist has persuaded Weston to go off his meds but other than that there is no connection to what is going on – it just seems as though in the middle of trying to bust a conspiracy, Lauren Ambrose is for no apparent reason improbably stalked by a disturbed individual (who also bugs her apartment with cameras for no clear purpose). The only reason one can assume for the addition of such a random piece of plotting is that the mini-series needed to pad out its running time. It is hard to believe such a bungled script comes from John J. McLaughlin who has elsewhere turned out estimable work on films like Black Swan (2010) and Hitchcock (2012).

Mikael Salomon has proven a proficient tv director (see below for his other genre credits) but here shows that he has no idea of how to direct suspense. The original film and book were works of lean and effective suspense that built up to the shock revelation of what the Jefferson Institute was up to. However, the mini-series blows all the surprises well before it should have. The opening clip of a group of activists breaking into the Jefferson Institute gives away within the first minute the essential surprises that the story holds. Moreover, Salomon’s directorial tone lacks any subtlety. It is suggested that there is something sinister going on at the Jefferson Institute from the moment that the place is introduced early in the show. The fact that something is up in OR8 is also heavily signposted by Salomon’s camera pulling back to ominously frame the number on the door, while other pieces like the carbon monoxide in the blood are clued in well before they should have been.

Throughout, Salomon has a hugely irritating habit of throwing in what seems like suspenseful contrivations and then jerking the carpet out from under us in ways that reveals the drama we were invested in to be a red herring. In the opening moments, an ambulance pulls up outside the hospital and the camera follows a nurse hurrying a medical container through to surgery where we expect it to be an organ for a transplant – only to find that she is delivering the doctors’ coffee. In another scene, Lauren Ambrose returns home and is shocked by seeing her roommate (Kate Kneeland)’s arm lying awkwardly out from the couch in the foreground as though she has been murdered, only for Salomon to pull back and reveal that she is merely sleeping. In maybe the worst of these idiotic red herrings, a wounded Steven Pasquale is taken into surgery, which is intercut with scenes where the conspirators make the decision to recruit another subject and we get the impression that Pasquale is going to be the next victim, only for it to then be anticlimactically revealed that he has been taken to another hospital.

In the central role, Lauren Ambrose seems to merely be coasting through. Ambrose was an actress of great promise in tv’s Six Feet Under (2001-5) but you get the impression that she has merely regarded Coma as a job assignment to pay the bills. She never seems to invest the central character with an intellectual curiosity and crusading zeal to fight for right. Similarly, Steven Pasquale does little other than inhabit a role. The acting strength of the show mostly rests with the seniors, Ellen Burstyn who incarnates her part like a hideous Wicked Witch, and Richard Dreyfuss who emerges with surprising bite in the second half.

Danish born Mikael Salomon has worked as a cinematographer on a number of films. He premiered as a cinematic director with A Far Off Place (1993) and the disaster film Hard Rain (1998). Since then most of Salomon’s directorial work has been in television with genre tv series and movies such as Aftershock: Earthquake in New York (1999), the Dean R. Koontz adaptation Sole Survivor (2000), Young Arthur (2002), the remake of ‘Salem’s Lot (2004), Fallen (2006), episodes of Nightmares & Dreamscapes: From the Stories of Stephen King (2006), the remake of The Andromeda Strain (2008), The Lost Future (2010) and the Stephen King adaptation Big Driver (2014).