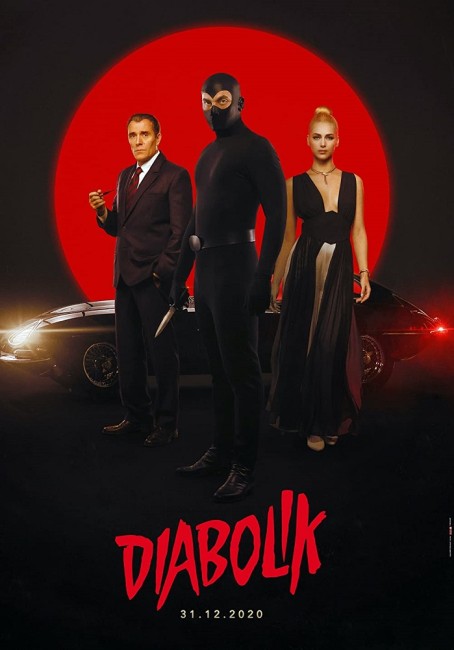 The bane of the police department in Clerville is the masked criminal Diabolik. Diabolik masterminds daring robberies and getaways, yet nobody knows his identity. Lady Eva Kant, the widow of a wealthy South African businessman, arrives in Italy. Diabolik’s determined nemesis Inspector Ginko comes to warn her that Diabolik will make attempt to steal her fabled Pink Diamond but she is unafraid. Using a lifelike facemask, Diabolik impersonates a waiter to get to the safe in her room. After she confesses that the diamond is a fake and says she wants to meet Diabolik, he reveals his true face to her. The two admit an attraction. Diabolik also maintains an identity as Walter Dorian, living with Elisabeth Gay. Elisabeth then finds his secret lair beneath the property and alerts the police who arrest Diabolik. Throughout the trial, Diabolik communicates secret directions to Eva in Morse Code and sets up an elaborate ruse to prevent him from being sent to the guillotine.

Diabolik is a classic Italian comic-book. Although not widely distributed outside of Italy, the comic has a cult following, even saw a number of imitators. The comic-book was created by sisters Angela and Luciana Giussani in 1962 and has been in publication ever since. The two sisters wrote most of the stories until Angela passed away in 1987 with Luciana continued overseeing publication, gradually turning the strip over to others writers before retiring in 1999. The comic-book found an international appeal with Mario Bava’s witty and stylish film adaptation Danger: Diabolik (1967) starring John Philip Law as Diabolik and Marisa Mell as Eva Kant. There was also a US co-produced animated tv series Diabolik (2000-1) that ran for 40 episodes.

Diabolik is a new film version of the comic-strip from the Manetti Bros., Marco and Antonio. The Manetti Bros. directed numerous music videos in Italy from the 1990s before making their film debut with the low-budget horror film Zora the Vampire (2000). They went on to other works such as the SF film The Arrival of Wang (2011) and the horror film Paura 3D (2012), as well as the non-genre Floor 17 (2005), Song of Napoli (2013) and Love and Bullets (2017).

In the opening scenes, the Manetti Bros. get the essence of the Diabolik comic-book down perfectly. We see Luca Marinelli in his black-masked costume – which is skin-moulding rubber or vinyl where everything is stripped down to a narrowly illuminated band of light around his eyes – and driving his trademark E-type Jaguar. The getaway scenes are a sublime masterpiece of this type of film – Diabolik fleeing from a police blockade at either end of an alley by remotely activating a hidden ramp and jumping his car right over the top of their vehicles; releasing gas behind his vehicle to knock pursuers out; and then leaving Inspector Ginko trailing a mocked-up tail end of his car.

The Manetti Bros. make a film with a slick, stylish elegance. Everything has been retro-dated to a 1960 setting, two years before the comic-book began. Thus all the vehicles, women’s outfits, record players and electronic equipment are in period. One of the great fun aspects of the film is its employment of grand pulp devices that have largely become outmoded these days – the use of lifelike facemasks and elaborate imposture schemes, truth serums, secret lairs with hidden door entrances behind rock or brick walls, even beneath an ordinary grass lawn.

As Diabolik, Luca Marinelli lacks the smouldering good looks of John Philip Law – his eyes have a piercing intensity, although there are also shots where he tends to a certain blankness. The film’s one unabashed triumph is Miriam Leone as Eva Kant. She radiates sophistication and allure with everything she does, and has an ability to own every scene in which she appears. Not to mention the costuming people go to town and outfit her with an array of dazzling outfits. The scenes with her and Diabolik connecting or the operation involving Morse Code messages blinked in a courtroom to the elaborate ruse to trick her way in to rescue Diabolik on the eve of his execution are sublime.

There is the inevitable point where you have to compare Diabolik with Danger: Diabolik. First of all, it should be said that I enjoyed both versions equally. They also take very different approaches to the same material. To compare, Diabolik to Batman, you could say that Danger: Diabolik is like a much more stylish version of the Batman (1966-8) tv series whereas Diabolik rests more in the territory of the Christopher Nolan Batman films. Mario Bava made much more of a pop art comic-book of a movie with hilariously stylised direction to match. By contrast, the Manetti Bros. make a more realistically grounded film, which they then use as a springboard to deliver a series of wittily sophisticated set-ups and improbably pulpish plot devices.