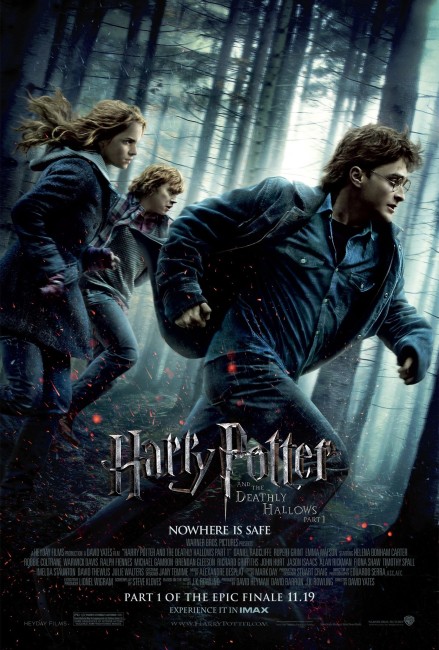 The Order of the Phoenix separate out, using magic to turn several of them into duplicates of Harry Potter and mislead Lord Voldemort’s followers as they attempt to kill Harry. Harry, Hermione and Ron each receive a bequest in Professor Dumbledore’s will and believe these contain clues to the locations of the horcruxes. As they gather to celebrate Bill Weasley’s wedding, they learn that Lord Voldemort’s forces have overthrown the Ministry of Magic. Forced to go on the run, Harry, Ron and Hermione adopt disguises to break into the Ministry of Magic and steal back the real locket horcrux that has been taken by Dolores Umbridge. Escaping into the wilderness, they try to find a means of destroying it. They are forced to take turns wearing the horcrux but doing so brings out all that is dark and negative in them. This causes Ron to leave, jealous of the closeness between Harry and Hermione. Together, they realise that they need to find the Sword of Gryffindor in order to destroy the locket.

This does seems an odd decision in that The Deathly Hallows is only the third longest of the Harry Potter books, sharing the honours with Harry Potter and the Half-Blood Prince (2005) at 607 pages (in the UK version). These were beaten by Harry Potter and the Goblet of Fire (2000) at 636 pages and Harry Potter and the Order of the Phoenix (2003) in the No 1 spot with 766 pages. In none of these other cases have the producers seen fit to split up the books. Certainly, the last couple of films, especially Half-Blood Prince, have felt like they needed two films apiece to squeeze in all the running subplots and characters. (Ironically, despite being the longest of the books, Order of the Phoenix reigns in as the shortest of all the films in terms of length).

One suspects the sole reason for splitting The Deathly Hallows into two films has more to do with commerce. Given that J.K. Rowling has stated that she is at the end of the saga and will not write any more Harry Potter and given the unlikelihood that she would allow any original Harry Potter films to be made by other hands, Warner Brothers has not liked seeing the fast approaching end of the most financially successful film series of all-time. As a result, they have conducted a juggling act that allows them to extrude the end of the saga in a way that will wring out another $900 million or so at the worldwide box-office.

The last few Harry Potter films felt packed to near-exploding point with characters and plot elements that the filmmakers have tried to cram in to keep up with the number of balls J.K. Rowling has up in the air. The good news is that spread over two films, it now feels that the book has finally found a length at which it is far more comfortable being told. All of that said, coming to Harry Potter and the Deathly Hallows Part 1 as someone who has not read the last few books, the constant shifting line-up of characters and plot elements is confusing. I was completely mystified to find Severus Snape, who seemed to be shaping up as one of the good guys in Half-Blood Prince after a great deal of ambiguity throughout the preceding five books/films, now a member of the council of bad guys at the start of this film and wondered if I had missed some important development (although the coterie of Harry Potter fans acting as my advisors assure me that the next film will reveal that this is not quite the case).

The early part of the film is centred around the wedding of Bill Weasley but this is a character from out of nowhere that we have never met before. Likewise, the character of the elf Kreacher assumes a significant role, leaving me struggling to remember what his part in the saga was beforehand. There is a good deal of mystery created concerning both Dumbledore and Sirius Black’s siblings and other characters in the past, but these seems to whip by so murkily that you never grasp the essence of the mystery being set up. John Hurt turns up in a non-speaking role being rescued from the dungeon at the very end but his significance is never explained.

The other surprise is that despite the largest line-up of recognisable name actors of any of the films, almost all of the supporting characters from the rest of the series have been sidelined and/or get often little more than one or two lines apiece. This is particularly noticeable in terms of the romance with Ginny Weasley that built up sweetly in the previous film whereas here Bonnie Wright is relegated to a single scene in the entire film. Again, much of this would not doubt be cleared up by referring to the books, but in the interest of reviewing the films as their own entities, I made a deliberate point of not reading the book before I saw the film.

Harry Potter and the Deathly Hallows Part 1 is surprisingly slow in terms of pace – certainly, the splitting of J.K. Rowling’s book gives the filmmakers much more leisure to tell the story. With most of the other characters out of the way, it becomes a film about silences – often of Harry and the others sitting in the middle of a landscape and contemplating nature or puzzling over the mystery left by Dumbledore. Indeed, there are times I would have sworn I was watching one of the Lord of the Rings films more so than a Harry Potter film. In particular, the latter half of the film has an epic feel to it where David Yates is clearly aiming for the visual majesty that Peter Jackson created in The Lord of the Rings: The Fellowship of the Rings (2001), showing the three characters dwarfed by bare and open rural Welsh and British landscapes as they set out on an almost impossible journey. Equally, you cannot help but think of the scenes with the trio being affected by the horcrux as similar to those with the schizophrenic Gollum and Frodo’s moods swings as the Ring takes hold in The Lord of the Rings: The Two Towers (2002).

The other surprise about the film is how director David Yates has stripped the visual effects scenes back almost altogether – you saw him starting to do so in The Half-Blood Prince but Deathly Hallows Part 1 is almost austere in its lack of big effects set-pieces. This is a considerable surprise, especially when you contrast Deathly Hallows Part 1 to say Chris Columbus’s first two entries, which were constantly in your face trying to impress you with effects trickery. Not to say they are not there – set-pieces like the escape from the Death Eaters at the start of the show, the attack on Harry by the snake Nagini, a beautiful stylised animated sequence telling the story of the Deathly Hallows – but these are not what the film is about and almost seem included as an afterthought.

There is some hurried running about in the first half, but the second half almost entirely features the three characters alone in the wilderness. This allows the central triptych of cast members, Daniel Radcliffe, Rupert Grint and Emma Watson, the opportunity to shine as actors and essentially carry the film between them. David Yates also does a fine job of allowing humour to flourish – be it the early scenes with various people transformed into multiple copies of Harry or their attempts to infiltrate the Ministry in disguise and Ron’s forgetting that he is not a married man as he rescues his wife.

As he showed in the last sections of Half-Blood Prince, David Yates does a great sense of creating atmosphere – the venture into Godric’s Hollow has something hauntedly otherworldly to it – while the opening scene where Voldemort is shown killing a teacher signals this is a Harry Potter film that may give the young ones nightmares. Other scenes such as the death of Dobby are immensely affecting. David Yates’s Order of the Phoenix, still my favourite among the Harry Potter series, finished with a beautiful sense of a war looming. Yates’s next entry Half-Blood Prince got sidetracked into silly plotting around Hogwart’s (which we never even visit here), but Harry Potter and the Deathly Hallows Part 1 is the opportunity we have been waiting for when David Yates takes up that torch and carries it towards what feels like an epic conclusion.