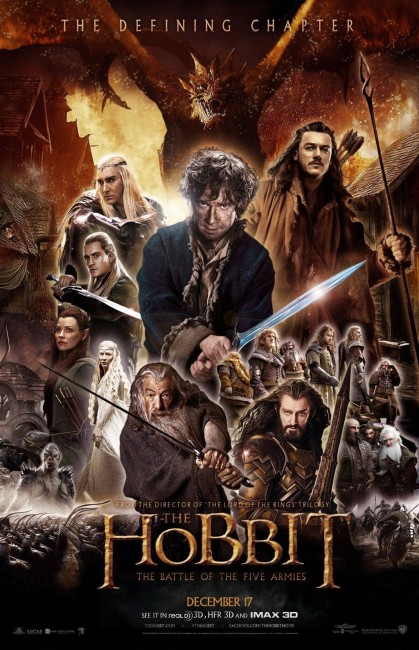 As the dragon Smaug lays waste to Lake Town, Bard takes it on and fires a giant arrow into the vulnerable spot of its heart, killing it. Inside the Lonely Mountain, Thorin Oakensheild orders the entrance barricaded against all outsiders as he obsessively searches for the Arkenstone. Bilbo Baggins, who has taken the Arkensteone, sees Thorin descending into madness, suspecting the other members of the party of taking it, while breaking off his agreement with the people of Lake Town and refusing them their share of the dragon’s wealth. However, the death of Smaug sees armies from all over – those of woodland elves, dwarves and Wargs, along with the dispossessed peoples of Lake Town, all gathering in preparation for war.

Jackson’s first two Hobbit films felt underwhelming. As opposed to the first trilogy adapting a massive 1500-page work that had been published in three books, Jackson has padded The Hobbit (1937), a single volume of 350 pages out into three films of equivalent length. Each of the previous three-hour movies had only comprised 5-6 chapters of book apiece – The Battle of the Five Armies, notedly the shortest of all the Lord of the Rings films, makes do with a mere four-and-a-half chapters.

The padding is obvious. The Battle of the Five Armies opens on Bard’s killing of Smaug with the arrow to the heart. It is a great set-piece to open the film on – it gets the drama flowing, it has the Weta Workshop doing their top work and audiences on the seat of their chairs from the moment the film starts – and yet it also badly feels like it should have been the climactic set-piece of The Desolation of Smaug. Indeed, you feel like such a showcapper would have pushed that otherwise lacklustre effort into being a much better film.

We then cut to some bits where Galadriel, Elrond and Saruman rescue Gandalf and drive the embryonic Sauron away, which is nothing much other than padding and fanservice to tie the two trilogies together. We then come to the meat of The Battle of the Five Armies – the in-politicking between the maddened Thorin and his quest for the Arkenstone as armies of men, elves and Wargs arrive at the gates of the mountain stronghold.

These contain some of the best scenes in the film as Jackson allows his actors – most notably Richard Armitage, Luke Evans, Lee Pace and Ian Stott – to do the best acting of the trilogy. Jackson has relaxed directorially from the previous films and does more to allow the actors to carry the parts. Of course, Jackson still indulges his worst trait – overblown and crashingly obvious symbolism, as well as letting visual effects stand in for actors enacting characters – Thorin gets nightmare fantasies of drowning in an ocean of molten gold as though we had not gained the impression that is made at every other point in the script that he has become maddened with his obsession with hoarding the wealth.

Similarly, Ryan Gage is written with a single note characterisation – cowardliness, something that if every scene he is in where he is the comic heel doing the craven thing did not make obvious, Jackson physically over-emphasises by giving him a hunch, bad teeth and a snivelly nose. These are the sort of characteristics you would expect of a director making children’s films, not ones with clear ambitions to be regarded as one of the top filmmakers in the world. Nuance, you feel, is a characteristic lost on Peter Jackson.

I have compared Peter Jackson’s Hobbit trilogy to George Lucas’s Star Wars prequels. In exactly the same way as it was when Lucas came to Star Wars Episode III: Revenge of the Sith (2005), The Battle of the Five Armies becomes the last opportunity for Peter Jackson, after having lost his way with the previous two entries, to get his act together and deliver what his fanbase expect him to. And the good news is that Jackson, just like Lucas finally did in Revenge of the Sith, manages to deliver.

I get the impression that Jackson never fully understood why The Lord of the Rings worked – you got the feeling that he was tone deaf to the romantic elements that fans reacted to in the first film such that he had to go back and shoot more scenes in order to boost this in the subsequent entries. The first two Hobbit films saw him shuffling around aspects of Tolkien in a slightly different mix in the hope that some of it would connect. As most of this was concentrated on bloated visual effects sequences, fanservice and comic scenes with dwarves, it failed to work. Jackson tries to add romance to this trilogy (despite the fact there are no major female roles in the book) – but the sight here of Evangeline Lilly getting all maudlin over the romantic protestations of Aidan Turner who is half her  size look more absurd than they do anything to cause tears to swell in your eyes.

Nevertheless, the last three chapters of The Hobbit have served Jackson up a near-infallible opportunity to make the trilogy work for him at last. Almost all of this is concentrated around the titular Battle of Five Armies. Jackson wowed audiences with the massive Battle of Helm’s Deep in The Two Towers – the point for most that seemed to signal that The Lord of the Rings was starting to come together as great cinema – and tried to replicate that in The Return of the King with lesser effect. The Battle of the Five Armies delivers up on a mithril platter the opportunity for him to create the mother of all battle scenes.

And that is fairly much what Jackson does – for something like 45 minutes. It is the opportunity for him to go to town on all the epic scenes of armies covering entire valleys and hillsides, sweeping helicopter shots across teeming battlefields, getting the camera down amidst the melee and watching combatants exchange sword, axe and hammer blows, even the introduction of battle elks, goats and even bats. The conflict is spread out across several different sets of terrain – from valley to iced-over river surface to mountainside pinnacles, inside a tower and down amidst the ruins of the dwarfish stronghold.

It is Jackson doing the sort of showoffy aiming for the epic that Jackson does well and finally it is the point that The Hobbit trilogy starts to deliver what we have been wanting it to for the last two films. It gets all the posturing, the tragic emotional longeurs, the heroic triumphs right. You do quibble with some of the improbable physical moves that the combat requires – like Legolas’s apparent anti-gravity climb up the stones of a collapsing bridge – but it is Jackson doing what we wanted him to do.

The question is what next for Peter Jackson? He has said that The Battle of the Five Armies will be his last visit to Middle-Earth and that he is off to concentrate on smaller New Zealand stories. Somehow, when it comes to a director whose only directorial move is the epic-sized canvas and exaggerated overstatement, you suspect that he won’t be doing this for long and will be back making massive epics in relative quick time – after all he still has a bunch of optioned properties he has said he will do someday, including a remake of The Dam Busters (1954), adaptations of Naomi Novak’s dragon novel Temeraire (2006), and a sequel to The Adventures of Tintin (2011). Somehow, one suspects as these fail to take off – is anybody really hungering for a Dam Busters remake? Was Spielberg’s first Tintin film such a burning success that audiences will be queuing around the block? – that Jackson will be back in Middle-Earth to make another billion or so dollars soon enough. My prediction will be that he (or at least some other under his producership) will be returning to Middle-Earth – probably with material pillaged from The Silmarillion (1976) – within the next decade.

(Nominee for Best Special Effects and Best Production Design at this site’s Best of 2014 Awards).