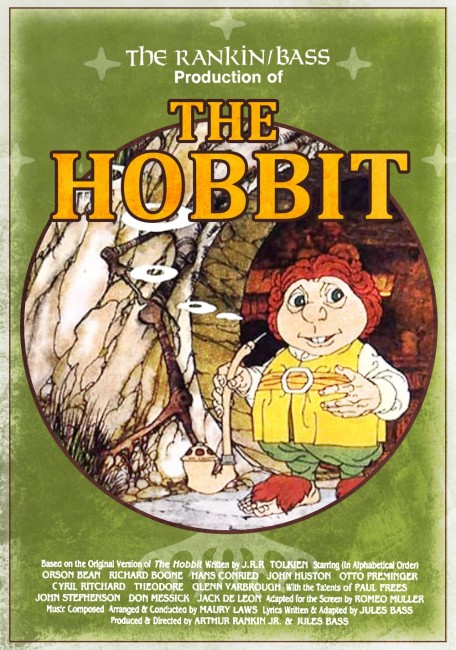 In the peaceful Shire, the hobbit Bilbo Baggins is approached by the wizard Gandalf who wants to hire a burglar to join an expedition planned by himself and thirteen dwarves. They are intending to travel to Lonely Mountain to reclaim the dwarves’ hereditary treasure, which has been appropriated by the dragon Smaug. Bilbo agrees and they set forth on a journey. Along the way, they encounter elves, goblins and the wolf-like Wargs. Bilbo falls into a cavern where he meets the strange creature known as Gollum and they fight for possession of a magic ring Bilbo finds, which can make the wearer invisible. Finally, they travel on to confront the fearsome Smaug in its lair.

J.R.R. Tolkien will always be associated with The Lord of the Rings (1954-6). Slightly less well known in the mythos of Middle-Earth is his earlier work The Hobbit; or There and Back Again (1937). The Hobbit originally started out as a story made up by J.R.R. Tolkien to amuse his children, which he then wrote down and published. After Tolkien began to ponder on the magnum opus that would later become The Lord of the Rings, he realised that the events of The Hobbit would become the precursor to his Middle-Earth epic.

The film was made by Jules/Julie Bass and Arthur Rankin Jr, who had made a number of other animated and stop-motion animated works for children. They started out ominously with Rankin merely writing his name as director-producer on the English-language versions of Japanese films like Willy McBean and His Magic Machine (1965) and King Kong Escapes (1967). They soon went onto make the delightful stop-motion animated Mad Monster Party? (1967) and the various Frosty the Snowman and Rudolph the Red-Nosed Reindeer tv specials, among numerous other seasonal tv productions. By the late 1970s, Rankin and Bass were clearly looking to stretch their horizons and began to touch upon epic fantasy in several animated films. They adapted The Hobbit here and then went onto make The Flight of Dragons (1982) and the excellent The Last Unicorn (1982).

Almost certainly, The Hobbit was made to capitalise on the interest sparked by Ralph Bakshi’s planned two-part animated adaptation of the Lord of the Rings. (Alas for Bakshi, he had planned to film the books in two parts but the first half was not a success and the second was never made as a result). The thing that should be said about The Hobbit is that Rankin, Bass and screenwriter Romeo Muller keep to J.R.R. Tolkien’s text exceedingly closely. One might even heretically suggest that the film follows Tolkien far more meticulously than either Bakshi or Jackson do in their respective versions.

Romeo Muller does condense some of the action slightly but all the elements of the story are there, in the correct order and so on. The background mythology is retained and Jules Bass even puts some of Tolkien’s song lyrics to music. Moreover, while there is a tendency to dismiss The Hobbit as being juvenile, and while the animation is certainly limited, the artwork and backgrounds have an impressive texture and detail, while all the characters – Bilbo, Gandalf (despite being voiced with the distinctive laidback drawl of John Huston), Gollum, the dwarves and elves – are drawn exactly as one imagined them on the page.

On the other hand, the place where Bakshi and Jackson both have it over Rankin and Bass is that they opened Tolkien up with a full sweep of imagination. The Hobbit‘s fault is that it never ignites with any sense of epic adventure, largely due to being made in limited animation. When it comes to the scenes with the spiders, Rankin and Bass for some reason direct all the action in an animated kaleidoscopic blur rather than show any fighting. Perhaps this was a desire to not make a film that was designed for a children’s audience too violent – although the later Battle of the Five Armies is contrarily directed with a reasonable degree of violent turbulence.

The film is also lumbered with a dated folk score and there is the bad tendency upon Rankin and Bass’s part to substitute songs for drama. The scene where the Wargs attack is exciting but is severely undercut by having the incredibly laidback folksy songs run over the top of it.

The film does pick up when it comes to the scenes where Bilbo confronts Gollum and they engage in the game of riddles and when Bilbo invisibly enters Smaug’s lair, which are all conducted with a sufficient degree of drama. Of course, the sequence where Smaug takes to the air and attacks Laketown is magnificent. Somehow one suspects if The Hobbit had been made with the animation budget that Bakshi had available it could have emerged as a much better film than his Lord of the Rings.

Arthur Rankin and Jules Bass later returned to J.R.R. Tolkien with The Return of the King (1980). This is not a sequel to The Hobbit but an unofficial sequel to the Bakshi film, with Rankin-Bass adapting the third book in The Lord of the Rings and essentially finishing telling the saga that Bakshi never managed to complete. Peter Jackson subsequently conducted a three-part live-action adaptation of The Hobbit with The Hobbit: An Unexpected Journey (2012), The Hobbit: The Desolation of Smaug (2013) and The Hobbit: The Battle of the Five Armies (2014) where the basics of the story were substantially padded out and expanded.