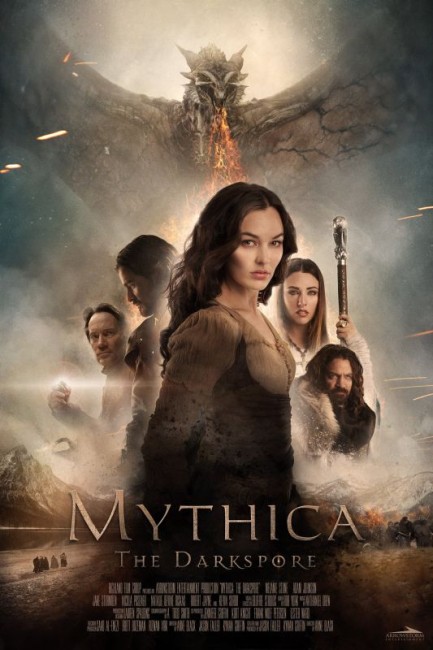 Following their expedition to rescue Teela’s sister, Marek, Thane and Dagen are relaxing at the local inn, while Teela is grieving. Marek is visited by her mentor the magician Gojun Pye who confirms that she is a necromancer but tells her that her powers can be used for good. The group find a map and realise that it shows the way to the lost city of Mondiathor, which contains one of the four fragments of the powerful Darkspore. Teela gathers the party and they set out on a race to get to Mondiathor before Kiskkumen. To make it there first though means taking a dangerous path. Along the way, they rescue the dark elf Qole from a fairy trap and he joins the party where he and Marek discover an attraction. Meanwhile, Peregus Malister, the head of the Thieves Guild, has purchased Marek’s slave deed from her owner and pursues, determined to capture her.

The Mythica series was an attempt to create an original epic fantasy series by Utah-based Arrowstorm Entertainment. The series began with Mythica: A Quest for Heroes (2014). The Darkspore was the second entry and was followed by Mythica: The Necromancer (2015), Mythica: The Iron Crown (2016) and Mythica: The Godslayer/Mythica: The Dragonslayer (2016). All of the films have been made with Kickstarter financing. Here director Anne Black and all four of the principal actors from A Quest for Heroes return, while Kevin Sorbo makes another brief appearance as Marek’s sorcerer mentor.

I liked Mythica: A Quest for Heroes a good deal. It was low-budget but everyone seemed to be making an effort way above and beyond the average fan production resulting in something that approached considerable professionalism, if not a very high degree of creativity. That continues here in what is a sequel that genuinely expands out on its predecessor rather than just acts as ‘the further adventures of …’

The story here is slightly the lesser than A Quest for Heroes. In that film, the best parts were the introduction of characters but the film became less interesting once it settled in to becoming a standard adventure. With the set-up over, The Darkspore is more of a regular adventure, wielding stock tropes like the dark lords(s), the artifact of great power and the quest for the treasure of the lost city.

The film’s best scenes come during the in-between bits – in the romantic developments between the various characters with Jake Stormoen rather hilariously caught as the wrong man in the middle in every pairing. Anne Black has a great deal of fun introducing the impressively buffed Rocky Myers – the two girls’ drop-jawed expression at first seeing him bare-chested is hilarious.

The downside of the plot is that while we get a journey to a lost city, the arrival there never amounts to anything more than the party going through some caves. (We never actually see the city). The climactic confrontation/betrayals between the parties takes place in the outdoors at some standing stones where it feels like the film, which has been leisurely in introducing its wilderness encounters up to that point, seems to compact a whole bunch of plotting into the last few minutes.

As in A Quest for Heroes, The Darkspore does miracles with its low-budget. There is a so-so CGI dragon at the start and some banal animated magic power blasts but the digital fairies work surprisingly well. The film even has sufficient ambition to create a series of digital battle scenes.

Anne Black is proving an immensely talented director. Mythica: The Darkspore doesn’t quite give her the opportunity to allow her art direction talents to flourish like A Quest for Heroes did but other aspects shine – in particular, a visually stunning scene where Nicolas Posener stands at her sister’s funeral pyre in front of a lake covered in mist. It would be most interesting to see what Black could do with a decent budget behind her.