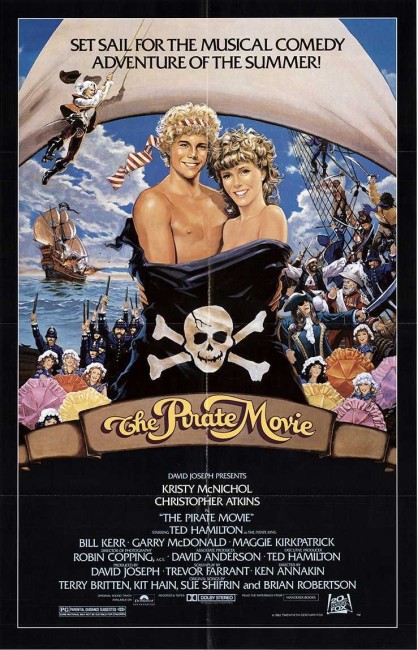 In the present day, the nerdy bespectacled Mabel is attending a pirate recreation with her girlfriends. She is volunteered onto the stage as part of a sword duelling exhibition. When the handsome guide asks her to join him for a party on the island, her girlfriends elbow her aside and jump onto the yacht, deliberately casting off just as Mabel arrives. Determined, Mabel hires a small boat and sets out to the island but is shipwrecked by a squall. Washing ashore on the island, she falls unconscious and has a dream. In the dream, the handsome Frederic is an orphan who has been raised by the Pirates of Penzance. Upon his twenty-first birthday, he is granted his freedom. Knowing that the pirates killed his parents, Frederic decides they must now be his enemies. He sets out into the world to discover love. He comes upon an island and immediately falls for Mabel, the youngest of the nine daughters of Major General Stanley. Custom demands that she cannot be married until all the older sisters have been and so she and Frederic set out to steal the pirates’ treasure and earn her freedom. The pirates then invade the Major General’s castle. Frederic stands against them until the Pirate King reveals that Frederic was born on a leap year, meaning that he will not turn twenty-one until 1940. With Frederic forced by honour to return to the pirate crew, this pits he and Mabel on opposite sides as she raises an army of local bobbies to fight off the pirates.

The Pirate Movie is a fascinatingly bizarre pop culture artifact from the 1980s. It was laughed off the screen when it came out and flopped badly, being nominated for nine Golden Raspberry Awards, including Worst Actor awards for both its leads, Kristy McNichol and Christopher Atkins, Worst Director (which it won) and Worst Film. It has gained a modest cult afterlife in recent years.

The Pirate Movie adapts The Pirates of Penzance surprisingly faithfully for the most part, adhering closely to the plot and characters, even incorporating a number of songs from the original (albeit adding several original pop songs to the mix). Alas, both The Pirate Movie and the film version of Pirates of Penzance flopped badly. This was followed by a string of other flop pirate films over the next two decades with the likes of Savage Islands/Nate and Hayes (1983), Roman Polanski’s Pirates (1986) and CutThroat Island (1995). The pirate movie would have to wait until the runaway success of Pirates of the Caribbean: The Curse of the Black Pearl (2003) and sequels before sailing back at the box-office.

The Pirate Movie was driven by co-star Ted Hamilton, an actor and businessman who had had a career in television, and David Joseph, a music producer who had never made a film before this. Imported to handle the production was Ken Annakin, a British director with a career going back to the 1940s who was brought in as replacement after the film had started shooting. Annakin had made a number of other adventure films, including big hits like the Disney film The Swiss Family Robinson (1960) and Those Magnificent Men in Their Flying Machines (1965) and had previously ventured into the fantasy genre with mermaid film Miranda (1948) and subsequently made The New Adventures of Pippi Longstocking (1988). Annakin had also just made the tv movie The Pirate (1978), although this is unrelated to pirate movies and is in fact a Harold Robbins adaptation about the life of an Arab business tycoon.

Quite clearly the idea that the producers had was to graft The Pirates of Penzance onto the recent hit of The Blue Lagoon (1980), which featured Brooke Shields and then neophyte actor Christopher Atkins as innocents/lovers washed up on a desert island amid gorgeously shot natural surroundings. Thus we get a Pirates of Penzance that is focused on the romance between the two stars amid panoramic shots of the beach and their slow-motion meeting in the surf, all accompanied by numerous montages shots and double exposures as the film slows down for pop songs to play (where both Atkins and Kristy McNichol recorded tracks for the soundtrack). This idea runs somewhat aground here as The Pirate Movie is clearly operating with a reduced budget and is rarely able to afford The Blue Lagoon‘s luxurious natural scenery (the homestead at Werribbe Park in Victoria, Australia is a weak stand-in for what is referred to as the Major General’s castle, for instance).

The one thing that the film does manage to obtain is Christopher Atkins, the co-star of The Blue Lagoon, in what was only his second film role. As even Atkins himself had admitted over the years, he was not much of an actor. He plays the part with a perpetual wide-eyed innocence and seems to lack any concept of depth or how to express anything. Mostly it is a performance that seems driven by his pretty golden-haired looks – at which you have to admit that Atkins certainly looks spiffingly handsome in his gold and blue epaulettes. Opposite him is Kristy McNichol who had risen as a strong potential name on the basis of several tv roles as a teenage actor in the 1970s but never went anywhere much following The Pirate Movie.

It rapidly becomes apparent that The Pirate Movie is a film that is not taking itself seriously. Ted Hamilton is constantly making anachronistic quips – like when he beaches the pirate ship and shrugs “little close to the curb” or where ninja turn up in the midst of a pirate battle and he comments “I told you to order Chinese but this is ridiculous.” McNichol calls herself a feminist and remonstrates Christopher Atkins with lines like: “You can’t live your life by the outmoded conventions of a neo-imperialist society.” There is even a scene where she wonders if Atkins and Ted Hamilton don’t have something gay going on (something that Hamilton’s fruity over-the-top delivery seems determined to portray – at one point, he turns to Atkins while making an eye-rolling falsetto “Hello sailor”).

The film is peppered with numerous contemporary pop culture references. When Bill Kerr delivers Gilbert and Sullivan’s Major General’s Song, this has now been re-written with references to Bo Derek, The Rolling Stones, The Beatles and Star Wars (1977). There are numerous parodies and in-jokes of popular films from the era – Christopher Atkins wielding a lightsabre during a sword duel, an Indiana Jones lookalike who turns up in the middle of the climactic battle, while Garry McDonald has a scene where he impersonates Peter Sellers’ Inspector Clouseau from the Pink Panther films.

Some of the comedy routines that the film throws up are agonising – like a scene where Kristy McNichol prepares to offer herself to Ted Hamilton in order to get him to take his shirt off so that Christopher Atkins can make a copy of the map tattooed on Hamilton’s back from where he is hiding outside the cabin. There is an extremely ridiculous swordfight between Christopher Atkins and Ted Hamilton with Hamilton severing the head from a bust and making another of his agonising quips “Head of the family?”, the two stopping for drinks served up by the butler, they swinging on chandeliers as Hamilton quips “We must stop meeting like this.” Atkins picks up a lightsabre – “Did I teach you that?” Hamilton asks. “No, saw it in a movie once,” Atkins shrugs.

Characters are constantly breaking the fourth wall – Kristy McNichol turns to the screen with comments like “Can you believe this?” or “That was a short love scene.” Sexual innuendo frequently underlies the film – Christopher Atkins views the beach full of Stanley sisters from his boat whereupon his telescope suddenly becomes erect with a cartoonish whee sound, while he emerges from the surf with a handful of flowers he has found there and comments “I’m sorry, I didn’t mean to deflower you.”

There seems no limit on how silly the film is prepared to be with the climactic fight involving a showdown between pirates, daughters and inept British bobbies with Ted Hamilton despatching opponents by lifting weights and bringing the barbell down on their heads; pirates seen being spanked at one point; Christopher Atkins even barking to drive bobbies off; an Indiana Jones lookalike turning up and Garry McDonald breaking the fourth wall to push the camera out of the way as the bobbies beat a suspect. Finally, Kristy McNichol abruptly decides “It’s my dream. I want a happy ending,” and arranges to marry all the daughters and pirates off.

Maybe it’s not as bad a trashing of the original as it might have been as one must remember that before Gilbert and Sullivan were discovered as high art by respectable society they originally made their operettas as populist burlesque and they themselves made a virtue of nonsensical and deliberately unrealistic plot contortions. Somehow this seems a fitting modern equivalent.