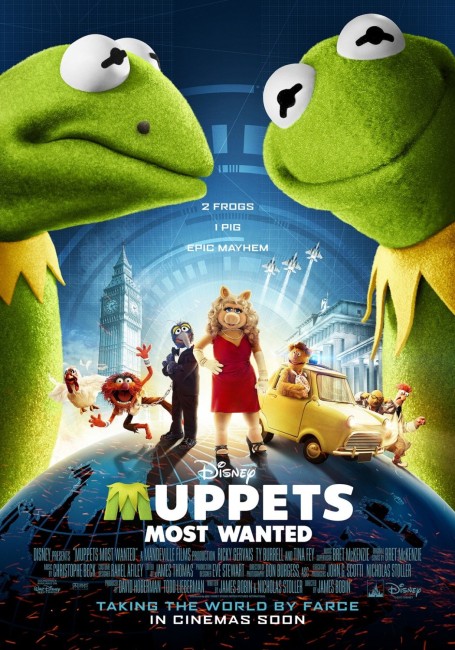 With the success of their last film, The Muppets debate about what to do next. They employ a new manager Dominic Badguy who persuades them to take ‘The Muppet Show’ on a world tour. After they arrive in Berlin, Badguy suggests Kermit go for a walk – only for Kermit to be arrested, thought to be an identical lookalike master criminal Constantine who has just escaped from a Siberian gulag. Constantine takes Kermit’s place, while Kermit is shipped back to the gulag in his place. Under Constantine, The Muppets are allowed to perform whatever crazy acts they want. Constantine and Badguy meanwhile use the tour as cover to rob various international galleries and museums in search of clues left by Colonel Thomas Blood to the key that will allow them to steal the British Crown Jewels. In the gulag, Kermit is forced by the warden Nadya into becoming the director of the prison’s variety show and tries to use this as cover to make an escape.

The Muppets were the most famous creation of Jim Henson. After a couple of tv specials, they made their appearance on the tv series The Muppet Show (1977-81) – a witty and creative spoof of the variety show format. This was a hit that became enjoyed by both adults and children alike – on one hand, containing the cutsie talking animals that amused the kiddies and on another a series of sly gags that went over their heads to the adults. The Muppets became an indispensable fixture of 1980s pop culture. Jim Henson spun the Muppets out in two films, The Muppet Movie (1979) and The Great Muppet Caper (1981), which maintained the same high degree of creativity and wit as the tv series, and one less effective film with The Muppets Take Manhattan (1984).

After Jim Henson’s death in 1990, The Muppets entered Phase 2. The Henson empire was inherited by his son Brian who put them out through a desultory series of films, The Muppet Christmas Carol (1992), Muppet Treasure Island (1996) and Muppets from Space (1999), as well as a short-lived tv series revival Muppets Tonight (1996) and three tv movies, It’s a Very Merry Muppet Christmas Movie (2002), Kermit’s Swamp Years (2002) and The Muppets’ Wizard of Oz (2005), which progressively weakened the creativity of the original show. Phase three of The Muppets began in 2011 when Disney, who had purchased the rights back in 2004, revived them for a big-budget feature The Muppets (2011). Even though The Muppets had never really gone away from screens, the film made a great play out of being their first major revival since the 1980s and proved a hit with both audiences and critics.

Muppets Most Wanted is a direct sequel to The Muppets. Direct in the most literal sense – the start of this film has the Muppets attending the theatrical premiere of the first film and then (in a perfectly Jim Henson-esque meta-fictional gag) turning and wondering why the cameras are still there. The pleasure of The Muppets was that it did a very good job of recapturing Jim Henson’s playful wit and sly gags. The same creative team behind The Muppets, director James Bobin and his same writing and producing team, have been reunited here.

Bobin and company offer up more of the same that they did last time. The film is absolutely packed with celebrity cameos – everybody from Salma Hayek, Tony Bennett, Lady Gaga, Celine Dion, Zach Galifianakis as a hobo at the wedding and Frank Langella as its minister, and Danny Trejo, Ray Liotta, Jemaine Clement and Tom Hiddleston as prisoners in the gulag, while Stanley Tucci turns up as one of the guards, among others. James Bobin gets into the spirit of the humour Jim Henson used to aim at the guests on The Muppet Show – Christoph Waltz turns up in Berlin to dance a waltz with one of the Muppets, although when the usher at the predictably turns out to be pop singer Usher the gag is starting to seem a little strained.

Having successfully played out the revival of The Muppets in The Muppets, Muppets Most Wanted is left with what to do. James Bobin happily avoids all of Brian Henson’s answers, which were to keep serving up Muppet variations on classic stories. He instead draws on Jim Henson’s lead with his second and third Muppet films. To this extent, Muppets Most Wanted often feels like it is recycling elements from The Great Muppet Caper – taking the Muppets to an international locations(s) and throwing them into the midst of a caper to steal the British Crown Jewels. (I know this is not meant to be a realist film but you keep asking how a 16th Century wooden key is able to turn off 21st Century laser grids and security locks at the Tower of London). The wedding of Kermit to Miss Piggy is a plot element that has been recycled from The Muppets Take Manhattan.

Muppets Most Wanted gets off some amusing gags – the Swedish chef in a Muppet parody of The Seventh Seal (1957) at one point – but it mostly feels like James Bobin and co have used all their best ammunition in The Muppets. It’s the sort of “let’s revive the Muppets for another film” thinking behind most of the 1990s films of Brian Henson, which quickly became a well-worn walk through the same old routines. The soundtrack is amusing, contains some often clever lyrics from Bret McKenzie once again, but crucially it never delivers any standout number. This in a way is indicative of Muppets Most Wanted – amiable and amusing without being anything that hits the genuinely clever or produces the belly laughs.

This was followed by a revival of the tv series with The Muppets (2015-6).