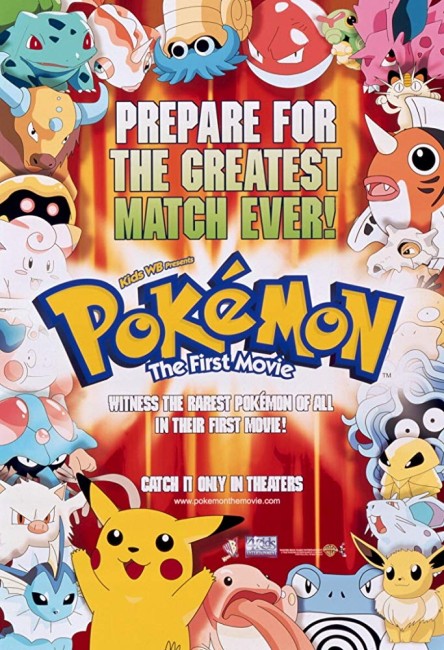 Various Pokemon trainers are issued an invitation to a challenge from the self-styled ‘world’s greatest Pokemon trainer’ on Mew island. Once there, they find the challenger is Mewtwo, a Pokemon clone that has been genetically-engineered to be able to talk and with superior powers. Mewtwo now wants to capture the other trainers’ Pokemon and creates clones out of them.

The Pokemon phenomenon was originally created by Japanese videogame company Nintendo as a game for very young kids. The name Pokemon is a Japanese colloquialism condensed from the original Japanese names of the creations – ‘Poketto Monstaa’ (or pocket monster). The games were a success and an animated tv series was quickly spun out that lasted for 200 episodes between 1997 and 2002. The Pokemon phenomenon hit big in the US in 1998 with the release of the games and was quickly followed by a dubbed version of the tv series (which became the most popular children’s series several years running) and a series of collectable trading cards. There have been assorted other revivals of the animated series ever since then. Since hitting the West, the Pokemon fad turned into something somewhere between a mass cult and a cynical marketing exercise. This was the first cinematic spinoff.

Pokemon The First Movie: Mewtwo Strikes Back has been aimed squarely at the Pokemon phenomenon. There are so many creatures and characters involved it is impossible for an outsider (like this author) to make any sense of what is going on. We are never given any explanation of what the Pokemon creatures are, what their powers are, or why, how or what ‘training’ by humans involves. As a great part of the film’s substance centers around this – and the plot makes no concessions to anybody outside the cult – for anybody with an age in the double digits watching, the film is akin to seeing a foreign language film without the benefit of subtitles.

The animation is cheap and limited so there is not even the art for the non-Pokemon fanatics to watch. Being Japanese, the film trades in many of the recurrent themes of anime – children wielding vast powers, tragic sacrifice, love as a transcendent force. Every line seems a banal attempt to make a message: “A Pokemon’s real strength comes from the heart,” “Someone’s got to take a stand and refuse to fight.” The climax seems as though the film is competing to pack as many messages in as possible. There are other times where the film is bizarrely surrealistic, like the Vikings that appear out of nowhere to transport the heroes – “I didn’t know there were any Vikings anymore,” “They mostly live in Minnesota.”