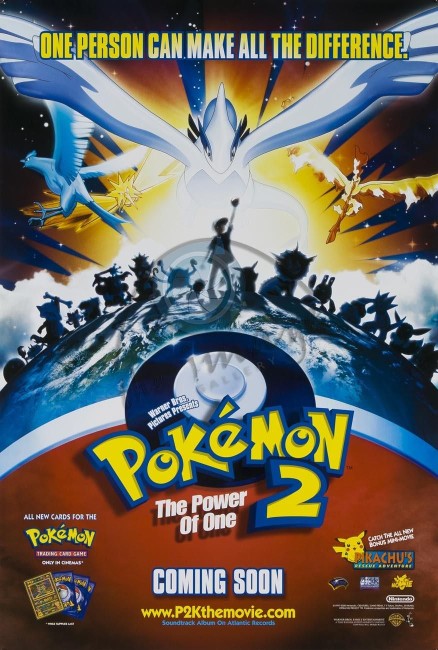 A villain in a skyship sets out to capture three rare Pokemon – Moltrase, bird of fire; Zaptor, bird of lightning; and Artikuno, bird of ice – for his collection. However, his capturing these upsets the balance of nature that the three creatures hold in check, causing havoc with the weather around Shamuti Island. The Pokemon trainer Ash Ketchum and his friends are in the vicinity of the island and race to stop him. After they rescue them, the three birds rampage across the sea and land, causing damage to the sea god Lugia. The only hope is for an ordained saviour to unite the three treasures and bring nature back into balance.

This was the second film spun out from the Pokemon phenomenon, the first being Pokemon: The First Movie – Mewtwo Strikes Back (1998). This was a banal effort and the second film, Pokemon: The Power of One, is a bit better. It never gets around the major problem that the first film had – namely that the film is so determined to create new collectible characters that the screen is overwhelmed by strange creatures and one doesn’t have the slightest idea of what is going on. As was the case with the first film, the human characters are less than one-dimensional and are completely drowned out by the creatures.

There are also many redeeming aspects about Pokemon: The Power of One. The first film was drawn at the level of limited tv animation but by this time the producers had discovered 3D animation. The villain inhabits a particularly cool looking flying airship. While what is happening is fairly incomprehensible, the action is satisfyingly exhilarating. Considering that the film is set up to push kids to collect as many new Pokemon as possible, the theme of a villain who is a Pokemon collector is peculiarly contrary.

What does make Pokemon: The Power of One worthwhile is when it starts to touch upon some of the transcendently beautiful images of anime. During the latter third, it whips up some dizzying and beautiful images of the three phoenix birds flying about blasting the landscape with energy beams and the emergence of the white god-like spirit in a waterspout, only to be savaged by the birds. All this extremely colourful flashing of energy bolts and mass destruction touches upon epic scope. Like a number of anime films – Nausicaa in the Valley of the Wind/Warriors of the Wind (1984), Princess Mononoke (1997) and Final Fantasy: The Spirits Within (2001) – there is a strong environmentalist theme – the Pokemon are seen as being closer to nature than people, greed upsets the balance of nature and the climactic battle ends with an environmental transformation that causes the Earth to come out looking like a Japanese rose garden paradise.

The subsequent Pokemon films were Pokemon 3: The Movie (2000), Pokemon 4-Ever (2002), Pokemon Heroes (2003) and some twenty other animated films. There was also the subsequent US-made live-action film Pokemon Detective Pikachu (2019).