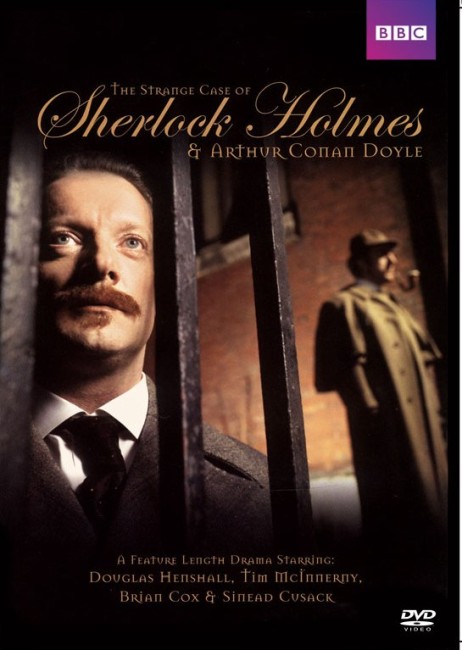 In the midst of celebrations for Christmas of 1893, Arthur Conan Doyle, world famous as the creator of Sherlock Holmes, receives a mysterious drawing with the words ‘Help Me’ written on it. Doyle rushes to see his father who is incarcerated in a hospital for the insane and is severely withdrawn, but is unable to communicate with him before he dies. In trying to deal with his grief, Doyle turns to spiritualism in the hope of contacting his father and saying what he never had the opportunity to in life. He also writes a story in which he kills Sherlock Holmes off, much to the upset of his legions of fans, so that he can devote his time to more serious writings. At the same time, Doyle’s publisher assigns the biographer Selden to write the story of Doyle’s life. Selden begins digging into Doyle’s past, including talking to Dr Joseph Bell, Doyle’s mentor who served as the inspiration for Sherlock Holmes. There Selden begins to dig up secrets from Doyle’s past that were instrumental in the creation of Sherlock Holmes. However, Selden is not who he seems to be.

There has grown a body of books and films that treat Sherlock Holmes in an exegetic manner – deconstructing him, analysing aspects of the stories that were never explained or only hinted at, writing further adventures or speculating about Holmes meeting other characters from Victorian fiction or history. These have ranged from the works of Nicholas Meyer – The Seven Per Cent Solution (1973), filmed as The Seven Per Cent Solution (1976), The West End Horror (1976) and The Canary Trainer (1993), which has Holmes meeting contemporaries like Sigmund Freud, George Bernard Shaw, Oscar Wilde and The Phantom of the Opera; or films like A Study in Terror (1965) and Murder By Decree (1979), which have Holmes solving the Jack the Ripper murders. Holmes has always been a central figure in works like Philip Jose Farmer’s Wold Newton Family, Alan Moore’s The League of Extraordinary Gentlemen graphic novels and Kim Newman’s Anno Dracula books, which create massive universes of inter-threaded characters from fiction. Other authors have placed Holmes up against everyone from Count Dracula, H.G. Wells’s The War of the Worlds (1898), Fu Manchu to H.P. Lovecraft’s Cthulhu mythos.

One of the more interesting variations was the tv-series Murder Rooms (2000-1), created by David Pirie for the BBC, which consisted of five feature-length stories. Murder Rooms took as its basis the real-life relationship between Arthur Conan Doyle and Dr Joseph Bell, Doyle’s mentor whose own processes of observation and deduction Doyle used to form the basis of Sherlock Holmes. Pirie and other writers spun out a speculative series of adventures in which the young Doyle and his older mentor investigated a series of mysteries that approximated the relationship between Holmes and Dr Watson where we were given the impression that it was aspects of these (fictional) adventures that inspired Conan Doyle with the Sherlock Holmes stories. David Pirie subsequently wrote The Strange Case of Sherlock Holmes and Arthur Conan Doyle, which went one step beyond what he did in Murder Rooms. In Murder Rooms, Pirie turned Conan Doyle into a fictional equivalent of Watson to Bell’s Holmes, while in The Strange Case he turns the minutiae of Conan Doyle’s biography itself into a Holmesian detective story.

There is no doubt that David Pirie has gone over Arthur Conan Doyle’s biographical detail with a scrupulous toothcomb and that the film contains a maximum degree of biographical accuracy. The minus side with this is that drama takes a long time to get into. For the most part, The Strange Case of Sherlock Holmes and Arthur Conan Doyle seems like a standard British costume drama as we sit observing the incidental and not always interesting detail of Arthur Conan Doyle’s life. However, as gradually becomes apparent, David Pirie has determined to conduct an examination of Conan Doyle’s psyche with a rigour that penetrates to the core of his motivations and creative processes.

Near the end, The Strange Case of Sherlock Holmes and Arthur Conan Doyle pulls a very peculiar twist revelation [PLOT SPOILERS] that becomes a surprise identity reversal twist along the lines of other films that we have had in recent years such as The Usual Suspects (1995), Fight Club (1999) and The Sixth Sense (1999). Here the script turns around to reveal that Selden the biographer is actually Sherlock Holmes come to life from out of Conan Doyle’s imagination to conduct an investigation into Doyle’s psychological processes. It is a twist that I still sit mulling over as I write this several days later, unable to decide if it is novel and ingenious or merely gimmicky. It certainly leaves The Strange Case of Sherlock Holmes and Arthur Conan Doyle a peculiar mix of a meta-fiction a la Stranger Than Fiction (2006); a conceptual reversal film a la The Sixth Sense; and one of the speculative biography films we have had in recent years – the likes of Agatha (1979), Time After Time (1979), Hammett (1983), Kafka (1991), The Raven (2012), In the Heart of the Sea (2015), the tv series The Secret Adventures of Jules Verne (2000-1) and indeed Murder Rooms – that place authors into a simulation of the adventures they wrote.

Douglas Henshall may not resemble the real-life Conan Doyle much but plays the part with maximum charm. Tim McInnerny, previously a comedy actor – see Blackadder (1982-9) – plays Sherlock Holmes as surely the most sinister we have seen the character, although does emerge with the piercing intellectual power that we know of a Holmes during the climactic scenes.

David Pirie is a writer who has also penned various works for British television including the mini-series Ashenden (1991) based on Somerset Maugham’s spy stories; Natural Lies (1992), a thriller about mad cow disease; No Man’s Land (1994) set in a future about East European people smuggling; adaptations of 19th Century Gothic stories like The Woman in White (1996) and The Wyvern Mystery (1999); as well as the cinematically released psycho-thriller Element of Doubt (1996). Pirie is best known to this writer as the author of two excellent and highly recommended works on genre cinema – A Heritage of Horror: The English Gothic Cinema 1946-1972 (1974) about the Anglo-horror cycle and The Vampire Cinema (1976).