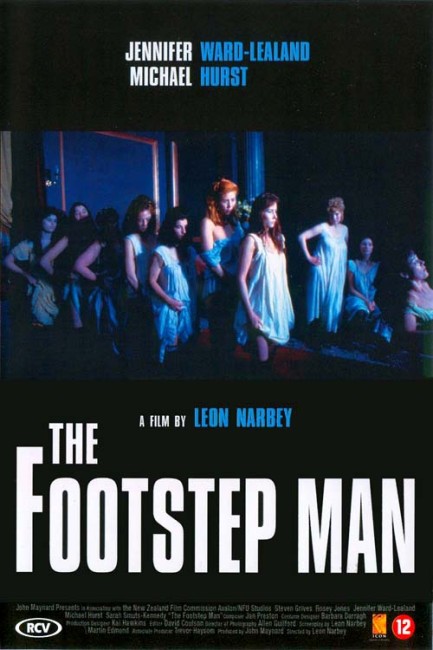 Sound effects man Sam Jolley is dubbing the soundtrack for a film called ‘Monsieur Henri’, based on the life of painter Henri Toulouse-Lautrec as seen through the eyes of his principal model and lover, the whore Mireille. The film ends with Mireille contracting syphilis and committing suicide. As Sam works on the film, he thinks that he sees the ghost of Mireille calling and then appearing to him, wanting him to change the ending of the film to tell her true story. Others around Sam think he is becoming too obsessive and heading for a nervous breakdown.

The Footstep Man is another variation on the film-as-secondary reality theme popularised in recent years by the likes of The Purple Rose of Cairo (1985), Who Framed Roger Rabbit? (1988), The Icicle Thief (1989) and Last Action Hero (1993). To play a film like this as serious drama instead of as light fantasy or comedy is a noble undertaking. And to further base the film-within-the-film on the life of the celebrated 19th Century French Post-Impressionist Henri Toulouse-Lautrec makes an even more intriguing artistic challenge. The Footstep Man was sold to the arthouse rather than mainstream audiences.

Despite the critical acclaim in New Zealand of director Leon Narbey’s debut feature Illustrious Energy (1988) about the 1860s New Zealand Gold Rush, nobody appeared that interested in going to see The Footstep Man and it received a critical panning.

The Footstep Man is not a bad film – its’ critical reception led one to believe a far more mediocre film than is the case. The images given of the process of filmmaking are striking, particularly Leon Narbey’s juxtaposition of images going on in the secondary film with the more banal things used to represent their sounds – raw meat thrown on a bench to represent a slap in the face, high-heels on a Parisian sidewalk amusingly represented by Steven Grives walking in high-heels along fake paving strewn with sand. Paris of the Belle Epoque is dressed with considerable unromanticised conviction – according to Michael Hurst, Leon Narbey went to incredible detail, even down to analysing and replicating the style of Toulouse-Lautrec’s brushstrokes.

Jennifer Ward-Lealand is exceptional as Mireille, presenting a hollowly haunting beauty that gives an extraordinary conviction to the film. Ward-Lealand’s real-life husband Michael Hurst, before finding fame as the sidekick on Hercules: The Legendary Journeys (1994-9), is fine in both his roles, most so as the barman – a momentary slip back into character to parody Toulouse-Lautrec’s limp shows just what a chameleon performance he has undergone.

For all that, The Footstep Man feels vaguely unsatisfying. The resolution the film offers, particularly for the film-within-the-film, seems banal and one cannot help but feel that its’ original ending worked with greater conviction. Leon Narbey tries to end on a positive upbeat message but this feels conducted with a little too much in the way of narcissistic self-absorption.

Leon Narbey has not directed another film subsequently. Nowadays, he works as a cinematographer, having shot a number of high-profile New Zealand films including Whale Rider (2002), Perfect Creature (2006), Dean Spanley (2008) and Rain of the Children (2008).