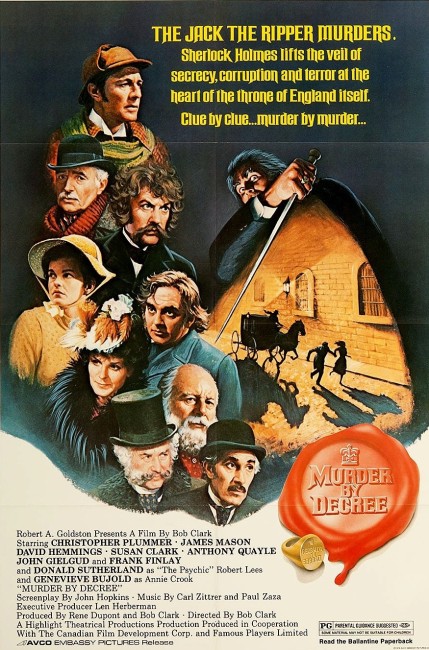 Sherlock Holmes is urged to investigate the Jack the Ripper killings by several merchants with anti-monarchist leanings. At the scene of one of the murders, Holmes discovers a piece of graffiti on a wall – “The Juwes are not men that will not be blamed for nothing” – that has been rubbed out by the police commissioner. Realising that this refers to three assassins in Freemason lore, Holmes uncovers the existence of a vast conspiracy to eliminate a group of prostitutes. This is something that takes him from the brothels to the madhouse and involves psychics, the Freemasons and Parliament, as he realises that the conspirators seek to protect the darkest secrets of the Crown.

This then-lavish $15 million Anglo-Canadian production attempts to delve into the mystery that has long been a favourite of Sherlock Holmes pastiche writers – that of having Sherlock Holmes solve the Jack the Ripper case. Indeed, Murder By Decree is an exceedingly scholarly attempt. It assumes its thesis from Stephen Knight’s Jack the Ripper: The Final Solution (1976), a book inspired by a 1973 BBC documentary, which posits the idea that the Jack the Ripper killings were conducted as a blind to cover up the activities of Prince Albert Victor. Albert purportedly married a Whitechapel prostitute in a secret Catholic ceremony where the murdered prostitutes acted as witnesses. After the marriage was discovered, the prostitutes were slaughtered by a conspiracy made up of Freemason members of Parliament and the assassinations disguised as the acts of a madman in order to protect the Crown. Other claims have Albert Victor as the killer, maddened by syphilis.

It is an ingenious and interesting thesis, although one that says more about the public’s penchant for conspiracy theories than it has any basic in factuality. The only basis for the claim is the intriguing alternate interpretation of a piece of graffiti found at the scene of the Catherine Eddowes murder – “The Juwes are not men that will not be blamed for nothing” – and the documentary’s theorising that Juwes is not simply poor spelling but an obscure reference to a triumvirate of Freemason assassins. (Knight and the documentary also give much credence to the story recounted by Joseph Sickert that he was the illegitimate grandson of Annie Crook, something that was later proven to be false by researcher Simon Wood).

In that there is no proof that the Ripper even wrote the graffiti, the theory rests on exceedingly shaky hearsay evidence and tends to fall apart in the light of logic ie. Why would the Crown think that anyone would take the stories of gin-soaked whores seriously enough to discredit the country? Why would the Ripper stop in an area that was prowling with police to write an obscure and grammatically baffling piece of graffiti? Why would the Freemasons, who normally pride themselves on their secrecy, want to advertise their presence upon this particular occasion?

In a fictional setting, the Freemason conspiracy idea has no requirement to credibly establish itself, which may well explain why this has become the most prevalent Jack the Ripper theory on film. It also formed the basis of the disappointing Ripper film From Hell (2001), while the earlier A Study in Terror (1965) also brought Holmes into solve the Jack the Ripper killings and involved a more diffuse conspiracy. (The subsequent Spanish film Holmes & Watson: Madrid Days (2012) also has Holmes solving the Jack the Ripper murders).

The addition of Sherlock Holmes makes a fascinating combination but results in an exceedingly complex plot that almost needs a Holmes to make head or tail of all the strands of conspiracy. The expected intellectual joy of watching a Sherlock Holmes story unfold vanishes under the weight of the exposition the script is required to tell.

Murder By Decree is not exactly helped by the casting of Christopher Plummer who makes a colourless Sherlock Holmes. That said, James Mason fares far better and gives a superbly droll performance as Dr Watson. Director Bob Clark plays up the atmosphere well, creating a densely fog-laden London of narrow streets with some claustrophobic chill. The sets are particularly well designed.

The director was Bob Clark. Bob Clark had previously made several fine B-budget genre films with Children Shouldn’t Play with Dead Things (1972), Dead of Night (1974) and the proto-slasher film Black Christmas/Silent Night, Deadly Night (1974). Murder By Decree was probably the best-made of Clark’s films – alas he squandered such opportunity by next turning to the excruciating teen film Porky’s (1982). Clark’s subsequent output was certainly been notable for his ability to hop genres – from the much-loved nostalgia film A Christmas Story (1983), the Dolly Parton vehicle Rhinestone (1984), the war film Turk 182 (1985), the screwball comedy Loose Cannons (1989) and the children’s films Baby Geniuses (1999) and Superbabies: Baby Geniuses 2 (2004) – if not exactly for Clark’s ability to turn out any majorly noteworthy films.

The other Jack the Ripper films include:- those that conduct supposedly straight tellings of the details of the case such as Jack the Ripper (1959), the Spanish Jack the Ripper of London (1971) with Paul Naschy, Jess Franco’s Jack the Ripper (1976) with Klaus Kinski, Jack the Ripper (tv mini-series, 1988) starring Michael Caine, The Ripper (1997) and the Alan Moore graphic novel adaptation From Hell (2001) with Johnny Depp or that feature The Ripper as a central character like Alfred Hitchcock’s The Lodger: A Story of the London Fog (1927), and its remakes The Lodger (1932), The Lodger (1944) and Man in the Attic (1953), as well as Room to Let (1950), although most of these vary widely from the known details. More prevalent have been speculative treatments, including the likes of:- the Ripper being an alien spirit that possesses Scotty in Star Trek‘s Wolf in the Fold (1966) and with similar stories occurring in episodes of Kolchak: The Night Stalker (1974-5) and The Outer Limits (1995-2002); the Ripper being Dr Jekyll in both Dr Jekyll and Sister Hyde (1971) and Edge of Sanity (1989); Jack the Ripper’s daughter featuring in Hands of the Ripper (1971); H.G. Wells and the Ripper travelling through time to the present day in Time After Time (1979) and its tv series remake Time After Time (2017), as well as a time-travelling Ripper appearing in episodes of tv series like Fantasy Island (1977-84), Goodnight Sweetheart (1993-9) and Timecop (1997-8); The Ripper having travelled out West in the Knife in the Darkness (1968) episode of the Western Cimarron Strip (1967-8);The Ripper being resurrected or copycated in the present day in The Ripper (1985), Bridge Across Time/Terror at London Bridge (1985), Jack’s Back (1988), Ripper: Letter from Hell (2001), Bad Karma (2002), The Legend of Bloody Jack (2007), The Lodger (2009) and Whitechapel (tv mini-series, 2009); a parody segment of Amazon Women on the Moon (1987) that speculates that the Ripper was in fact the Loch Ness Monster; the Babylon 5 episode Comes the Inquisitor (1995) that reveals the Ripper was taken up by aliens and redeemed; transposed to Gotham City in the animated Batman: Gotham By Gaslight (2018); even turning up as a character in the French animated film Jack and the Cuckoo-Clock Heart (2013). Also of interest is the tv series Ripper Street (2012– ), a detective series set in London in the immediate aftermath of the Ripper killings.