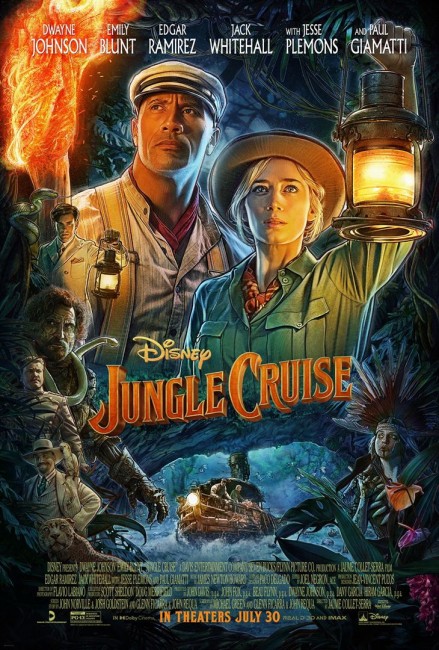 London, 1916. Lily Houghton, a doctor of botany, gets her brother MacGregor to stand before the Royal Society of Explorers to plead on her behalf for funding for an expedition up the Amazon to Lagrimas de Cristal in Brazil. She is determined to find the Tears of the Moon, a mythical tree reputedly found by the Conquistador Aguirre whose petals can heal any illness. While MacGregor is speaking, she sneaks into the basement to steal the arrowhead that contains the map to Lagrimas de Cristal. She and MacGregor arrive in Porta Velho and employ the services of the riverboat captain Frank Wolff to take them up the river. The journey is filled with many perils, including wild animals and native tribes. Pursuing them is Prince Joachim who is determined to obtain the secrets of the Tears of the Moon for the German war effort.

Since the 1990s, Disney has demonstrated an increasing willingness to leverage everything vaguely associated with its name in an effort to make money, including spinning off cheap sequels to their animated classics and most recently remaking them in live-action. This is why we also have had an ongoing trend for films based on Disney theme park rides. This had led to the massive success enjoyed by Pirates of the Caribbean: The Curse of the Black Pearl (2003), which is currently up to its fifth sequel with further films announced. On the other hand, the success of the Pirates of the Caribbean series is offset by a string of flop adaptations of other Disney theme park films – The Country Bears (2002), The Haunted Mansion (2003) and Tomorrowland (2015). One’s personal suspicion is that a good deal of the failure of these is simply that familiarity is limited to those who have visited Disneyland, leaving the concept unfamiliar to a great many international audiences that have not been to the park.

Jungle Cruise has been part of Disneyland since the park’s opening in 1955 and there are other versions at various of the international Disney theme parks. The premise is a distillation of the basics of the Adventure Film where the ride takes visitors in an antiquated boat on a journey down a river that somehow stretches through Asia, Africa and South America where they encounter native tribes, fallen ruins and animatronic wild animals. The guide is directed by The Skipper, a human tour boat operator who is known for making a series of atrocious puns (apparently Kevin Costner played the Skipper in one of early jobs before getting his breaks as an actor).

A Jungle Cruise film had been planned since the 2000s. The film was shot in 2019 and but ended up being held up for over for nearly a year with the theatrical closures during the Corona Virus pandemic of 2020-1. It finally emerges in July of 2021amid the beginning of theatrical reopenings, receiving a simultaneous release in theatres and on the Disney+ streaming service. Watching it, it seems an artefact from another whole other lifetime ago that is pre-Covid, something that is never more than clearly signalled when we get scenes that obviously been shot for 3D with trees and arrows coming directly out of the screen. With imminent multiplex financial failures in some areas, the fad for 3D is something you have to jolt yourself to remember was once seen as the big gimmick that made the theatrical experience and now seems to have gone to the same forgotten backwater as the vcr and the dvd.

Some parts of the other Jungle Cruise ride are contentious these days – Africa is avoided after complaints that they promoted racist and imperialist caricatures, which forced Disney to announce that they were removing depictions of headhunters and other elements from the ride several months before the film came out. South America is one locale that seems reasonably safe (even if the film never travelled any further to shoot than Hawaii). There is not really any plot to the ride, most just a series of spectacles and so everything about the Conquistadors and the Tears of the Moon has been invented by the film. Dwayne Johnson does still get to deliver all the familiar corny puns that the live skippers do.

In the same way that Raiders of the Lost Ark (1981) was a distillation of every serial adventure that George Lucas and Steven Spielberg enjoyed growing up, Jungle Cruise is equally a distillation of elements from the adventure film. The plot has been substantially borrowed from The African Queen (1951), which had Humphrey Bogart and Katherine Hepburn as a river boat captain and the sister of a missionary in a prickly relationship as they travelled up an African river in the midst of the German occupation during World War I.

This is a version of The African Queen as it might have been conceived following Raiders of the Lost Ark, albeit where the sparring relationship between Bogie and Katherine Hepburn gets the addition of a quest for a magical McGuffin. From Raiders, we also get the addition of pursuing Germans, although perhaps to avoid seeming overly plagiaristic the film is set twenty years earlier with the pursuers now being imperial Germans during World War I rather than Nazis. (Although to anyone with a sufficiently long cinematic recollection, this cannot help but remind of Cannon Films’ King Solomon’s Mines (1985), an excruciating experience one would rather erase from memory). It is also an African Queen that has been conceived in the aftermath of the Pirates of the Caribbean films where the adventure element is balanced with a strong element of comedy – the post-prologue opening scene has Emily Blunt in an escapade ducking around the explorers club and left hanging from an extending ladder out the window over a busy London street, something you easily see played out by Johnny Depp’s Jack Sparrow.

I entered into Jungle Cruise with low expectation based on the relative meh feeling all the other Disney theme park films had left me with and was expecting it to come out around the level of the average Pirates of the Caribbean sequel. That said, the film ended up surprising me. It’s a switch-your-mind-off popcorn ride but an extremely colourful one and far more enjoyable than it has any right to be. Disney have lavished a massive $200 million budget on the film and it shows in the huge and vibrantly detailed sets, the animatronic tigers and exotic animals and insects that populate the river.

In fact, I would go so far as to say that Jaume Collet-Serra takes the same adventure elements and massive budget that Gore Verbinski does on the Pirates of the Caribbean sequels and actually wields them into a tighter and more enjoyable film. Verbinski makes films that have occasional moments of eccentric humour stretched out around bloated and oversized effects set-pieces, something that became particularly evident with the first two sequels. By contrast, Collet-Serra never allows the size of the production to overwhelm him. The action and adventure elements – various scenes with rapids, attacking natives and Conquistadors, fleeing from the German topedo, a massively scaled scene through the temple at the end – are fun and enjoyable. (The most novel aspect is the effects of the resurrected Conquistadors whose bodies have been absorbed into tree branches, mud, snakes and honeybees), In particular, Collet-Serra allows the sense of humour to flourish and Dwayne Johnson and Emily Blunt to strike up a likeable rapport on screen. They’re not Bogart and Hepburn or even Harrison Ford and Karen Allen but the pairing remains a sparkly and likeable one that carries the show.

One interesting pieces of trivia is how the film incorporates real-life historic people into its story. (For other examples see Real-Life People in Fiction). The Conquistador Lope de Aguirre (1510-61) was a real figure known for his cruelty and treatment of the natives. He led a fateful expedition down the Amazon in search of the mythical city of El Dorado (although was operating in Peru on the opposite side of the South American continent to the film, which locates the action in Brazil). Unlike his fictional counterpart here, Aguirre was eventually murdered for his rebellion against the governor. A very different portrait of Aguirre and his expedition can be found in Werner Herzog’s standout Aguirre, The Wrath of God (1977). Prince Joachim Humbert (1890-1920) was also a real figure, the son of Wilhelm II aka Kaiser Bill, the last emperor of Germany. Unlike his fictional counterpart, Joachim’s life was largely undistinguished and following his father’s abdication, he was unable to handle life as a commoner and committed suicide by self-inflicted gunshot in 1920.