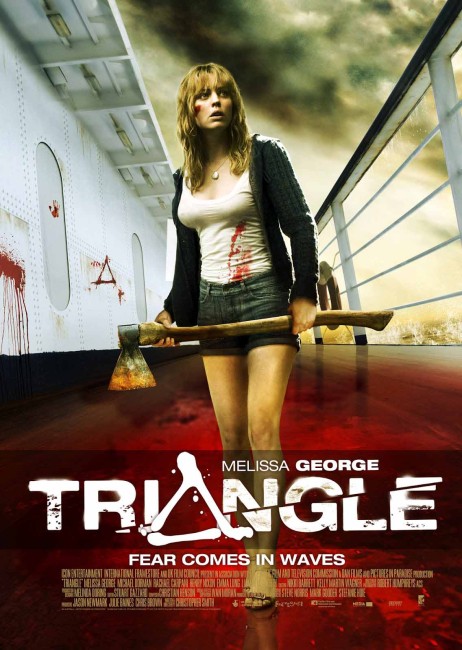 Greg sets out from a Florida marina on a sailing trip aboard his yacht along with a group of friends. Greg has also invited Jess, a waitress from the diner he frequents, along for the trip. Not far out to sea, they are hit by a storm that appears from nowhere and capsizes the yacht. They climb aboard the overturned hull and wait to be rescued. A mysterious cruise liner then appears. They board but find the ship strangely deserted. A masked figure then appears and starts shooting at them with a rifle, killing most of the group. Jess flees from the attacker and in the struggle manages to push them overboard. As Jess watches, everything repeats itself as she sees herself and the others board the ship from the overturned yacht all over again. This time she tries to prevent the others from being killed but in so doing begins to slot into and influence the events that have happened. However, in doing this and as events repeat themselves again, Jess discovers that yet another version of herself is destined to become the masked killer.

Triangle was one of those films that did not seem terribly promising at first glance – one thought it was yet another rehash of the nonsensical myth of the Bermuda Triangle – but proved to be a case of one taking a punt on a title at random and being immensely rewarded as a result.

Of course, if one had clicked on at seeing the name of British director Christopher Smith on the credits, Triangle would have gone up greatly in estimation. Christopher Smith first appeared with the fine Creep (2004) about horrors in the London Underground and since went onto make the Backwoods Brutality parody Severance (2006). He followed Triangle with the amazing Mediaeval horror Black Death (2010), the tv mini-series Labyrinth (2012) about the quest for the Holy Grail, the Christmas film Get Santa (2014), the thriller Detour (2016) and the ghost story The Banishing (2020).

As the party set out on the yachting expedition, Triangle seems like a standard film. The arrival at the empty luxury liner – and the title’s implication that it is something to do with Bermuda Triangle mysteries – seems to give indication of a haunted ship story along the lines of Death Ship (1980) or Ghost Ship (2002). Everything here – the light banter as the group set out, the garbled radio call before the storm, the exploration of the mysteriously deserted ship – seems standard for the genre.

Christopher Smith creates a certain eeriness but nothing prepares one for the remarkable twists and originality of turns that Triangle then starts to take. Rather than a ghost ship or Bermuda Triangle drama (indeed, the only significance of the term triangle is that it is the name of the yacht that the group set out on), Triangle turns into something akin to a horror movie version of Groundhog Day (1993) or perhaps even more so the time paradox film Timecrimes (2007) and its creation of multiple sets of happenings hidden within the margins of the events we have seen.

The standard mystery ship investigation is abruptly thrown on its head as, in a brief matter of course, a masked gunperson starts shooting, eliminating most of the party and then pursuing Melissa George through the ship. During the struggle with the shooter, Melissa succeeds in pushing them overboard. Things then start to get extremely weird as she stands up, only to see her and the rest of the party approaching the cruise liner aboard the overturned yacht all over again. By this point, we are starting to wonder what on Earth is going on.

Thereafter, Triangle creates a complex chain of events that ingeniously map in and out of everything else that happens. Things appear to be very similar to Timecrimes where the hero kept going back to the same events trying to change them but ends up participating in them without realising – the only difference here is that there is not the overt use of a device like a time machine and Christopher Smith appears to have all the events happening synchronously and gradually looping back into each other.

Christopher Smith’s interweaving of events between one strand of the timeline and the next is positively ingenious. There are some superbly chill moments – like where Melissa George discovers that all the notes that say “If they land kill them all” are in her own hand, or where she accidentally drops her pendant down through a grille and looks for it only to see dozens of identical pendants lying there in a pile. By this point, we are really starting to wonder what on Earth is going on. It becomes fascinating as we see her trying to break the loop but in so doing only becoming parts of the events that have happened.

Although, the most ingenious parts of the film come at the end when Melissa George winds up back on shore and, without wishing to spoil the surprises, we see everything slot back into the start of the film and casual details that were thrown away in the background emerge with ingenious revelations. The effect as the film travels full circle to happen all over again is incredibly haunting – in particular, the scene where Melissa George throws the dead bird over the side of the embankment to find dozens of dead birds there holds a disturbing chill as we realise that she has not broken the phenomenon at all and that it has followed her back to land.

Christopher Smith shot Triangle in Australia, the film being Australian co-financed and having an almost exclusively Australian cast. It is very nicely photographed, particularly the wide-angle shots of the yacht at sea. The supporting cast are mostly forgettable roles, although Michael Dorman has a natural handsome charisma as Greg. The bulk of the show rests on the shoulders of the fine and underrated Melissa George, an actress who is eminently worthy of much more high-profile roles than she has received so far.