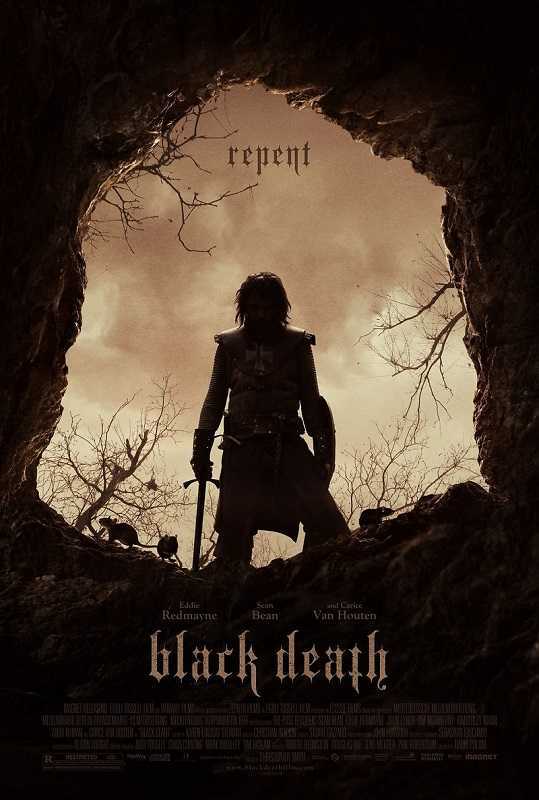 The year 1348. The Black Death has spread across Europe. The novice monk Osmund sends Averill, the woman he loves, away from the city back to the village where they grew up to avoid the plague. He prays for guidance as to whether he should follow. Immediately after, Ulric and his hardened fighting men arrive at the monastery. They are seeking a village and ask for directions across the Denwick Marshes. Osmund volunteers, as this is the area where he grew up. After they set out, Osmund learns the true nature of the mission – that the village they are going to is one that has been spared the effects of the plague, reportedly because the people engage in necromancy and the black arts. Ulric has been tasked to bring the leader back for trial. The journey there is a tough and brutal one. When they arrive at the village, they instead find a peaceful people led by the matriarch Langiva. As they seek the truth about the villagers, Osmund is shocked to find that they can in fact raise the dead.

Since the mid 00s, British director Christopher Smith has emerged as one of the finest genre directors in the world. Smith first appeared with the excellent underground horrors film Creep (2004) and then went onto make Severance (2006), a witty comedy that poked fun at the Backwoods Brutality films of the 1970s. It was not however until around 2009-10 that Christopher Smith emerged into his full strength as a directorial force. First of these was the amazing timeloop film Triangle (2009) and close on its tail was Black Death.

So far, Christopher Smith’s films are under the radar – they tend to get fantastic film releases, occasional general film festival screenings and mostly turn up on dvd/cable, as opposed to going the mainstream multiplex blockbuster route. Part of the reason for this seems to be that Smith prefers to make quiet independent films with funding from international sources as opposed to Hollywood studios (Black Death, for instance, comes from a consortium of German production companies) and places a focus on story as opposed to star glamour.

Black Death was made and came out around the same time as the more high-profile Nicolas Cage-starring Season of the Witch (2011). Both films are very similar, featuring a party of diverse men undertaking a journey during the Middle Ages in order to sort out matters of witchery. In both cases, the films make contrast between whether the witches are real or this is just the superstition of the era (something that Black Death conducts with far greater sophistication than Season of the Witch‘s clumsy attempts to wield ambiguity), while the issue of delivery from the Black Death (or bubonic plague) is also tied to the witches– actions. Both films were shot around the same time and dithered around finding a US release for the better part of a year.

Black Death has more historical authenticity in its first five minutes than there was in the whole of Season of the Witch. Where Season of the Witch transformed the Middle Ages into an absurd fantasy/action movie comic-book, Black Death gives us a portrait of the era with something that approaches almost documentary-like regard. Christopher Smith gives us all the grim imagery of the Middle Ages – the plague-infected corpses in the street, the mass burnings, the flagellants, the witch burnings – with unpretentious effect that is neither designed with a hyper-real emphasis or to rub our faces in unpleasantness. The swordfights are tough, brutal and non-glamorous, not stylised action movie flourishes, while the use of CGI effects is unobtrusive to the point of not even being noticeable.

The journey to the village comes with some great drama – with the scene where they elect to kill the infected member of the party (Jamie Ballard) being particularly strong. There is some fine, haunting writing during these scenes, especially one campfire scene where John Lynch describes the massacre of the French on the battlefield and how this invited the Black Death down as divine wrath.

The best part of Black Death come once the party arrives at the village. During the first half, the village is built-up as a place where the inhabitants engage in necromancy and have descended to barbarism but once the party arrive the village is contrarily shown as clean, ordered and almost utopian in the locals– welcome. We are constantly looking behind the villagers– friendliness wondering whether there is an ulterior motive or if such suspicions are just the superstition of the party.

Eventually [PLOT SPOILERS], in a twist of astonishing sophistication, Black Death is revealed to be a variant of sorts on The Wicker Man (1973). The scenes with the party imprisoned in the stockade where they are invoked to renounce their allegiance to God and taken away to be executed if they refuse is psychologically torturous. Especially grim is the scene where Emun Elliott agrees to renounce, is made to swear so before he is taken away into the woods supposedly to his freedom, only to be hung. There is also the heartbreaking scene where Eddie Redmayne is reunited with his love Kimberly Nixon who has been raised from the dead and after seeing she is wandering in mind, elects to kill her out of mercy.

[PLOT SPOILERS] Where Black Death gains its true power is during the scenes that come after that. Like The Wicker Man, the film is set up as a contrast of two opposed faiths – the soldiers who act on behalf of the church vs the pagans who have renounced Christian ways. With the exception of the purity of Eddie Redmayne’s faith, the Middle Ages is portrayed with such a brutality and the soldiers so harshly that it becomes hard to believe they could possibly be on the side of right. At this point, the film seems set up to merely contrast the two positions as The Wicker Man did.

[PLOT SPOILERS CONTINUE] Scriptwriter Dario Polone’s stunning ingenuity is to then throw this on its head and reveal that both sides are wrong – the end manifestly shows that Eddie Redmayne’s belief that he was following the will of God to be false and equally that the villagers are deluded, there was no resurrection from the dead, no sparing from the Plague, only a group of people following a charismatic priestess (Carice Van Houten) in Tim McInnerny’s words “because she was beautiful”. The most disturbing part is when Eddie Redmayne suddenly realises that if there was no necromancy going on then he has in fact killed his perfectly alive love Averill.

It is something that turns everything around in an instant – a film that boldly says there is no God, no pagan witchcraft, only the grim inevitability of the great leveller of the Black Death – a position not dissimilar to the end of Ingmar Bergman’s Middle Ages classic The Seventh Seal (1957). There is a particularly grim epilogue where we see that the youthfully innocent Eddie Redmayne has so had his soul blackened by what he did that he went onto become a witchfinder for the church, obsessively searching for Carice Van Houten and determined to persecute witches in order to prove what he did was right.

The most recognisable name in the cast is Sean Bean. Bean does what he does best – playing coldly ruthless and grimly haunted by his past yet at the same time projecting a handsome assurance that makes him unquestionably in command of the show. Christopher Smith has made the deliberate choice to play he (and especially the rest of the party) against heroic type and show them as morally ambiguous characters. The young and rising Eddie Redmayne is cast as the soul of callow youthful innocence and plays this to absolute perfection.

Christopher Smith subsequently stayed with matters Mediaeval with the cross-historical tv mini-series Labyrinth (2012) about the search for the Holy Grail, followed by the Christmas film Get Santa (2014) and the thriller Detour (2016).