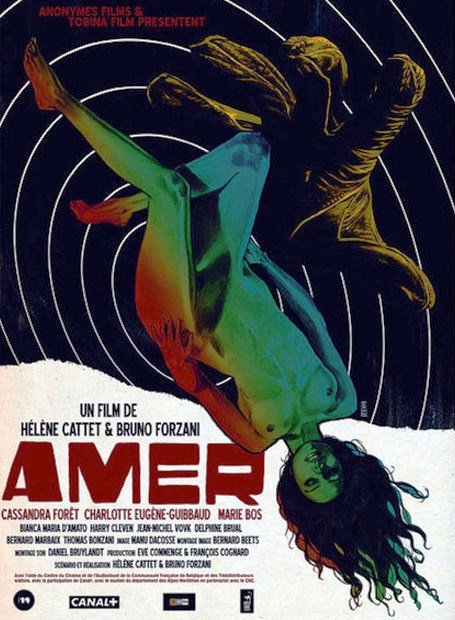 As a child, Ana ventures into the room where her parents keep the body of her grandmother. After taking a pocket watch from the hands of the body, Ana thinks the corpse is coming after her. As a teenager, Ana walks to town with her mother. While her mother is getting her hair done, Ana wanders away and is drawn to a group of bikers. As an adult, Ana returns to the abandoned family villa. However, someone is in the grounds and appears to be stalking her.

Amer is a debut feature from Belgian-based French filmmakers Helene Cattet and Bruno Forzani who are also a couple off-screen. All of the promotion for Amer (the French word that means ‘bitter’ or ’embittered’) calls it a homage to Italian giallo cinema – the poster could easily be one of the classic 1960s Italian psycho-thrillers or for a work by Dario Argento, while the score has been entirely sampled from giallo and Italian film soundtracks from the 1970s. That said, Amer does not always sit easily as being a giallo, even thought its makers are certain that it sits within the genre – there is a lack of the wildly contorted psycho-thriller plots, for one.

The film comes in three episodes, each showing the heroine Ana at a different stage of her life (and played by a different actress). The first of these concerns her as a child (Cassandra Foret) and takes place in a big old house that broods with shadow. We are only given partial glimpses that leave us unsure what is going on – hushed conversations where the parents seem stressed about something, the maid seeming to be peeping at Ana through the keyhole, broken glass found under the bed, a dead body being kept in the house.

The episode heads into creepy territory when Cassandra Foret sneaks into the room where the body is kept, tries to take the pocket watch clasped in the corpse’s hands, is then forced to hide under the bed as the parents’ come, which is littered with more broken glass that cuts someone’s feet. To get the watch, Ana is forced to use a crucifix hanging on the wall to pry open the hands of the corpse, breaking one of the fingers in the process, at the same time as the body’s eyes keep unnervingly snapping open. In terms of the giallo influence, this segment closely resembles the A Drop of Water episode of Mario Bava’s horror anthology Black Sabbath (1963).

Ana is then snatched by the maid who is only ever seen behind a black veil, after which things become more surreal and confusing. She walks in on her parents having sex whereupon the film seems to splinter into a fantasia of colours – bright purples, greens, pinks, reds – the sort of lighting schemes that Mario Bava delighted in in his 1960s gialli. She appears to be in a narrow space that fills and then becomes flooded with dripping water. The corpse starts coming after her and the pocket watch becomes a long chain that gets wound around the leg of the bed as she tries to escape. We then see that all of this appears to be taking place inside Ana’s imagination.

One would be hard-pressed to regard the second segment with the teenage Ana (Charlotte Eugene Guibbaud) as giallo or even anything that would sit in the horror genre. This focuses on Guibbaud as she walks to town with her mother and, as her mother gets her hair done, kicks a football belonging to a young boy away and follows it. She then comes upon a group of guys on motorcycles. There is a palpable sexual tension in the air before her mother comes and drags her away.

Cattet and Forzani use the editing to create implied visual language – Charlotte Eugene Guibbaud opening the button of her top as she walks, a car stopping as it comes towards them on the road in what seems an unmistakeably sexual intent on the unseen driver’s part, this seen in the way they are reflected in the side mirror or the paint of the vehicle’s bodywork. The exchange in the hairdresser’s takes place almost entirely in the closeups on people’s eyes, seemingly glaring with fierce accusations, of the young boy staring at Guibbaud’s breasts, of the menacing line-up of the indistinct faces of the bikers or the way a flash of reflected light plays across Guibbaud’s body as she walks towards them. Here the tiny movements tell stories that need no dialogue.

The third segment follows the adult Ana (Marie Bos) as she catches a train back home and then takes a taxi to the house where she grew up, which appears to have been abandoned for some time. The journey there is undercut by an equally palpable sense of sexual tension. We see her on a tightly packed train where the closeups focus on Marie Bos as she is forced to bodily brush up against people to get out. The taxi journey is filled with the same simmering sensuality – us made to feel Bos’s legs burning under her short skirt on the hot leather of the backseat in the car; the wind blowing through her face as she pokes her head out the window; the surly driver’s desire seen from the rear-view mirror.

This becomes eclipsed by something more surreal – her headscarf and sunglasses blowing off unnoticed as her head lounges out the window; the seatbelt seeming to cut into her breasts as the car sways and turns; her dress appearing to tear open; all contrasted with the driver’s increasingly hungry looks – before all of this is revealed as a fantasy in her head.

The scenes where Marie Bos is at the villa are the most clearly giallo influenced. As she enters and ascends the stairs, the portraits on the wall seem to hold the function of the staring eyes in the earlier scenes, the eyes prominently highlighted as they glare at her. Later when the same shot is repeated, all the eyes have been cut out of the portraits presaging something ominous about to happen. This episode seems to exist in imagination far more than all the other segment do. Marie Bos takes a bath but when she turns the taps on, they are dry – but moments later the bath seems to fill with water from nowhere before someone sneaks in and forcibly holds her head under the water.

[PLOT SPOILERS]. Later she walks around the villa as the taxi driver appears to enter the grounds and be stalking her. However, we start to wonder who is stalking whom – we get classic giallo-esque images of gloved hands wielding a razor, holding it against her throat, caressing her body, putting it between her teeth and then stabbing her, before it is bafflingly revealed that she appears to be her attacking herself. Later we see her corpse in the morgue being turned over to be dressed, all shot with the same exquisite sensual detail as was languished on the earlier scenes.

Amer is both fascinating and frustrating. It feels less like giallo than it does giallo deconstructed via the exquisitely visual sensuality of someone like Adrian Lyne – Flashdance (1983), 9½ Weeks (1986), Fatal Attraction (1987). The dialogue is almost regarded as trivial; this is one of the few films to conjure things on a level of sensation, being told in movements, suggestions and body language. Equally, it is almost entirely a film without a plot. There is no sense why these things are happening, no easy clues what is going on in the heroine’s imagination, no delving into her psychological processes. At most, you interpret it, not unlike Roman Polanski’s Repulsion (1965), as a work about a woman’s mental fracturing into paranoia thinking everybody is regarding her sexually. It is a film of exquisitely enigmatic guesswork.

Helene Cattet and Bruno Forzani next went on to direct the O is for Orgasm segment of The ABCs of Death (2012). Their next full-length film was a further giallo homage The Strange Colour of Your Body’s Tears (2013), followed by Let the Corpses Tan (2017).