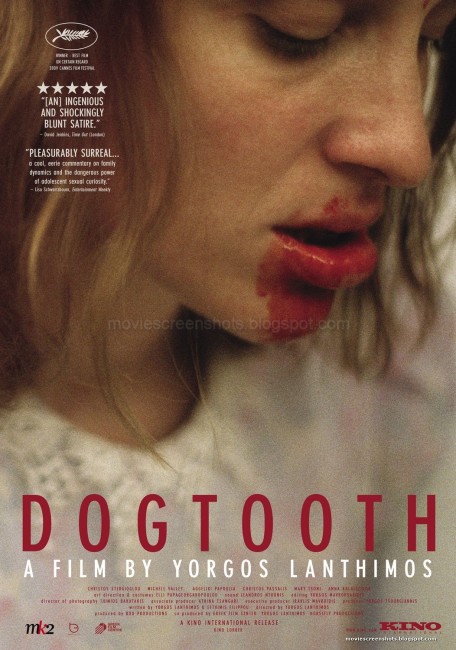 A man and his wife keep their son and two daughters inside the walls of their villa. The children have been told all their lives that the world outside is a dangerous place and are fed bizarre stories of what might happen if they go beyond the gates. The father brings Christina, a security guard from his workplace, back home to serve the son’s sexual needs. However, Christina pollutes the children’s unworldwise ways when she secretly gives one of the daughters some commercial videotapes.

This fascinating Greek film did the rounds of various general and fantastic film festivals during 2010 and gained a more than reasonable degree of acclaim, before becoming a surprise left-field nominee as Best Foreign Language Film at the 2010 Academy Awards. It served to make the name of Greek director Yorgos Lanthimos into a festival favourite.

Dogtooth defies any easy pigeonholing. It is, one feels, a genre film but there is nothing fantastical to it; it does not easily sit as horror despite its depiction of a psychologically disturbed social situation and several moments of gore; it has a speculative social situation (a family that have never encountered the outside world and only mythologise it in lies and half-stories) that could classify it somewhat as science-fiction even though it takes place in a setting that could with no stretch of the imagination happen in the real-world. Yet the film never sits easily in any of these categories. Maybe the nearest equivalent would be M. Night Shyamalan’s The Village (2004), albeit without the monsters or pseudo-historic setting and where the twist ending was obvious from the outset.

There are some fascinatingly bizarre scenes where the children are trying to piece together aspects of the world from their perspective – like where the mother goes into the bedroom to call the father on the telephone they keep locked in a bedside cabinet and the children eavesdropping outside wonder why she is always talking to herself; or where, after airplanes pass overhead, the father states “If it falls, the one who deserves it can have it” and then later offers up a toy plane. The film bewilderingly opens on scenes with the children listening to tapes about the replacement of familiar outside world phrases with alternate meanings, which lead to surreal dinnertable conversations “pass the telephone” (salt), phrases like “lick the keyboard” or the mother explaining that a cunt is a large lamp.

The proceedings become increasingly more blackly funny – like when the father gets in the car to travel three feet outside the gate to pick up the son’s toy plane after it falls there. Especially whacked out are the scenes involving the stray cat that enters the garden and is slaughtered by the son with a pair of garden shears – upon receiving news of this, the father stops on his way home, tears his clothes and then applies fake blood and returns with a story about having been attacked by the cat, telling the children that it is the deadliest animal there is and showing them how to fend off further attacks by getting down on their hands and knees and barking like dogs. (This is followed by the later demented image of the children at the edge of the gate barking while the father searches for the missing daughter in the car).

The film has entered totally insane territory when it comes to scenes where the father nonchalantly announces to the children that “Your mother will give birth to triplets and a dog.” Or where the daughter gets hold of video copies of Jaws (1975), Rocky (1976) and Flashdance (1983) and starts quoting the dialogue at the most inopportune moments and in one of the strangest moments performs Jennifer Beals’ climactic audition dance scene from Flashdance in front of everybody.

The camera set-ups are deliberately blank, uninteresting and unadorned. The reason for this is so that the camera can sit at an oblique distance and view everything taking place with perfect deadpan. Yorgos Lanthimos never spells anything out directly, only allows it to happen in front of the camera and leaves it for us to piece what is happening together. There are odd moments the film travels into horror – the killing of the cat, a horrible scene where the sister bashes her tooth out using a weight – and a number of scenes where Yorgos Lanthimos pushes the material into taboo territory – like where the parents casually decide that Christina cannot be trusted and decide to deal with the son’s sexual needs by getting one of the sisters to accept the task, or where it seems perfectly natural for the scared adult son to jump into bed between the parents or the sister to wake her father up by licking his chest.

One of the odder things is how the film never offers any particular explanation for the situation – at most, the father has a single line about wanting to protect the children from the outside world. The film ends with a fascinating existential blankness where the father heads to work unwittingly carrying the daughter in the trunk of the car and the camera simply closes in on the trunk and fades to black, leaving us to contemplate what might happen next.

Yorgos Lanthimos subsequently went onto make Attenberg (2010), which has not been widely seen internationally, the equally strange Alps (2011), the bizarre English-language science-fiction film The Lobster (2015) set in a future where people are required to be in relationships and are transformed into animals if they do not meet somebody, The Killing of a Sacred Deer (2017), a horror film in which Colin Farrell must face the choice to kill one of his family to lift a curse; and the Academy Award-nominated historical drama The Favourite (2018).