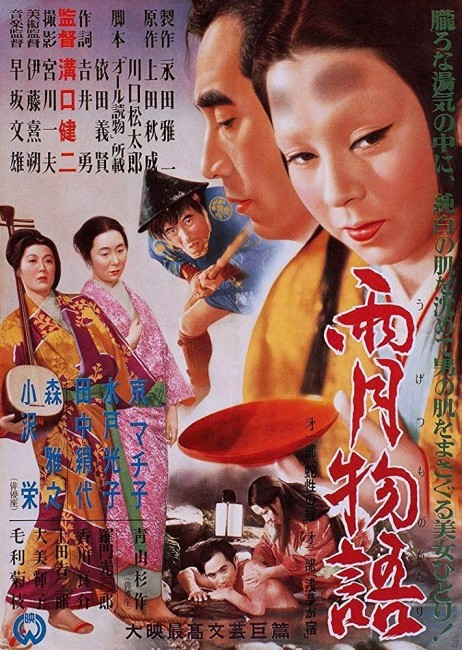 16th Century feudal Japan. The potter Genjuro’s pots suddenly become sought after and he throws all he has into making more. As marauding soldiers come, he, his neighbour Tobei and their mutual wives are forced to flee. They take a boatload of pots with them to sell in the nearest town. They see danger across the lake and Genjuro tells his wife Miyagi to return home with their son for safekeeping and he and Tobei go on to sell the pots. Tobei spends his share of the money to buy armour and a spear in order to fulfil his dream of becoming a samurai. He kills an eminent warrior and is claimed a hero as a result. Meanwhile, Genjuro is commissioned to go to the house of the Lady Wakasa to sell some pots. She decides she wants to marry him and soon Genjuro becomes enwrapped in bliss with her. Left back in the village, Miyagi is attacked and raped by bandits. What Genjuro does not know is that Lady Wakasa is a ghost.

Ugetsu Monogatarai has been frequently considered one of the great masterpieces of cinema, certainly one of the great works of art from the early era of Japanese neo-realist cinema. More importantly for the fantasy genre, it was one of the first kaidan eiga (ghost story films) to be made, or at least the first to gain major exposure in the West. It won director Kenzo Mizoguchi the Silver Lion Award at the Venice Film Festival in 1953. In both 1962 and 1972, Ugetsu Monogatarai ranked on the Top 10 list of Best Movies of All-Time held each decade by Sight and Sound magazine.

Ugetsu Monogatarai was made not long after Akira Kurosawa’s Rashomon (1950), which revolutionized Japanese cinema. There and in his subsequent films, Kurosawa had created the school of Japanese neo-realism – with his use of black-and-white photography, crafting tales usually set around feudal times and with much emphasis placed on the raw visual poetry and the naturalistic realism of the settings. Ugetsu Monogatari buys into the lyrical realism and feudal dynastic background that Kurosawa had established. Indeed, Saka Ozawa’s over-the-top acting in the role as the scruffy wannabe samurai seems closely modelled on Toshiro Mifune’s performance as the bandit in Rashomon.

There is a beautiful formalism to Kenzo Mizoguchi’s direction. The marriage scenes could almost be taken out of Noh theatre in their exquisitely mannered ceremony and the images of Machiko Kyo (who also played the raped wife in Rashomon) as Lady Wakasa moving through the house in her elegantly aloof formal makeup.

Contrary to many kaidan eiga, Ugetsu Monogatari is realist through and through. There are no overtly fantastical appearances – rather the ghosts appear as normal people and mortals have no ability to tell the difference. That said, the scenes with Genjuro confronting Lady Wakasa with symbols painted all over his body and the nurse ranting and weeping, trying to wield guilt, as Lady Wakasa fearfully backs off, are extraordinarily charged (and superbly scored with wailing traditional Japanese string music).

There is also an excellent scene near the end where Genjuro returns home and enters the empty house and then passes on through and around to come back in again, during which this second time around we see the wife sitting over the fire cooking in the foreground. It is a beautifully subtle moment that leaves you unsure whether you missed something the first time or whether she made a ghostly reappearance, something that not even the rewind button manages to dispel.

The story’s theme of the humble peasant who abandons his wife in order to move to a position above his station and is haunted for doing so is a theme that has run through a number of other kaidan eiga, including the Black Hair segment of the superb ghost story anthology Kwaidan (1964) and the oft-filmed Yotsuya Ghost Story – see Ghost Story of Yotsuya (1959) and Illusion of Blood (1965).