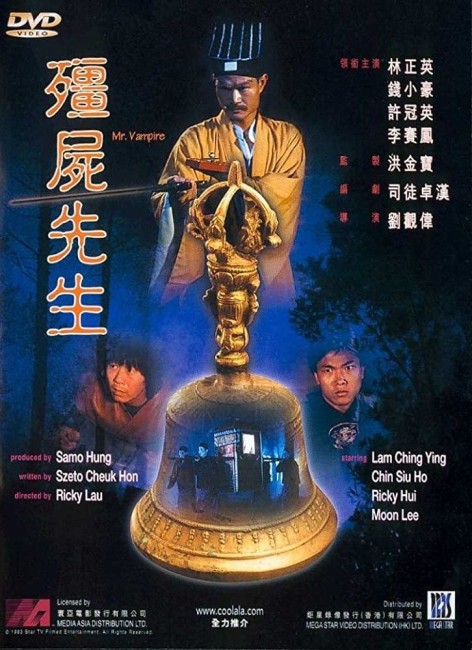 The novice monk Man Choi is given the task of reburying the merchant Mr Yam’s father. While doing so, Man Choi ends up falling for Mr Yam’s daughter, the lovely Ting Ting. However, Mr Yam’s father returns to life as a vampire and infects Mr Yam. In the struggle to stop him, Man Choi is also bitten. Man Choi’s fellow novice Chou must race to get enough sticky rice to stop Man Choi from transforming. Meanwhile, the ghost girl Jade has taken an interest in Chou and is determined to sway him from his mission and seduce him.

Mr Vampire was a huge hit in Hong Kong. It has inspired four sequels to date. It is an hilarious blend of horror/fantasy and slapstick humour, one where the horror and the humour mingle with an effortless ease that should be an object lesson to the likes of Roman Polanski in his failed vampire comedy The Fearless Vampire Killers (1967).

Some sequences are absolutely riotous – the fight with the revived Mr Yam where the prayer that holds him still gets accidentally knocked off by the officious Wai and Master Kau keeps getting his head stuck between the bars, ending with the police chief branded with his own iron with the word ‘Villain’ on it; or the sequence where Man Choi eats the prayer with Wai’s hair in it that makes Wai copy everything he does. A scene where Ting Ting’s interest in cosmetics is taken by Chou to mean that she is a prostitute thanks to a miscommunication from his mother comes out surprisingly funnily despite the poor translation – it is a sequence that takes place entirely in the wordplay.

Mr Vampire came out not long after the pioneering Wu Xia stylistics of Zu: Warriors from the Magic Mountain (1983), which largely started off the flying swordsman fad, and it comes filled with all the striking acrobatics of the Hong Kong fantasy film. The film is filled with extraordinary images – like the vision of the ghost girl Jade being carried through the forest in a carriage, all in time to a pop song on the soundtrack, and then gently floating through the air and landing on the back of Chou’s bicycle as he rides past unaware.

There is a very funny, totally whacko fight sequence between Kau, Chou and Jade with Kau trying to spear her with a prayer attached to the end of a sword, while she detaches her half-burned head, which then sprouts an electric shock hairdo and starts flying around hypnotizing Chou into believing that Kau is the villainous Wai attacking her.

It mounts to an immensely entertaining climax that involves some hilarious and scary pieces with everybody barricading up the main doors while the vampires are getting into the house through other exits; a fabulously funny sequence where Jade is hypnotizing Kau to come to her only to have him encounter Man Choi risen as a vampire at the same time; and a simply marvellous all-out fight with people flipping through the air, blasting vampires and a priest bringing his army of gently hopping vampires in as the cavalry and so on.

The Chinese take on vampires makes interesting contrast to the Western equivalent. The Chinese vampires are seen more in relation to the spirits of one’s ancestors than they are in term of Christian flesh-soul and damnation dualism. The images of the hopping vampires are much more genteel than Western images of ravening bloodsuckers. It is fascinating to watch elements of Eastern iconography – mirrors, written prayer strips, inked cotton, sticky rice – being employed rather than traditional crosses and stakes.