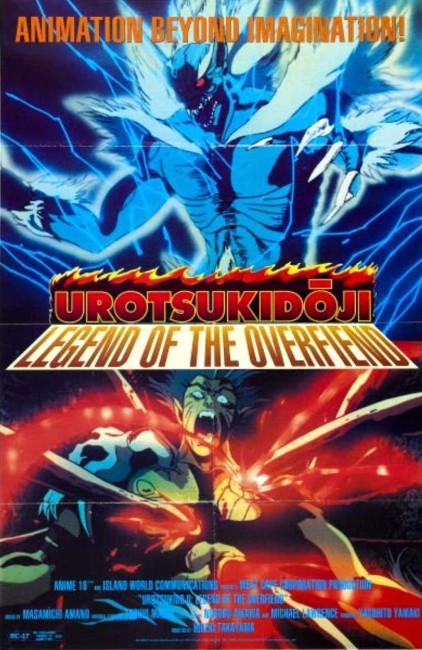 aka Urotsukidoji: Legend of the Overfiend; The Wandering Kid
(Chojin Densetsu Urotsukidôji)

There exist three worlds – the world of the Makai, the demons; the world of the Jujinkai, half-human, half-demons; and the world of the Ninjinkai, or humans. For 3000 years, there has been a prophecy of the coming of the Chojin, the overfiend who will unite all three worlds. The Jujinkai Amano Jaku comes to a school in present-day Tokyo in search of the Chojin, as also do a horde of demonic forces. Amano realizes that the Chojin is bullied high-school student Nogamu Tezu. As Nogamu starts to realize his powers as the Chojin, Amano finds that something is wrong and that the Chojin is not a creature of peace but a demon whose powers threaten the entire world.

To a large extent, it deals with the preoccupations and themes, what one might even term obsessions, that run through Japanese fantasy – youthful innocents set against world-shatteringly large forces; the transcendent power of pure and innocent love; casually brutal sex – rape and attack on the heroine by creatures with phallic-looking tentacles is commonplace; the city-destroying apocalypse that climaxes just about every single Japanese fantasy film; robust and very sexual depictions of demonic figures; casual and extreme violence – including here one character’s self-castration – and an ultimate redeeming belief in transcendent spirituality. Sexual fetishization, sublimated ultra-violence, perpetual replayings of the social apocalypse (in a haunted echo of Hiroshima and Nagasaki) – these are the fantasies that recur through the subconscious of the Japanese fantastique playground.

Legend of the Overfiend is both great and irritating. The animation is sketchy and the plot episodic. The first half disappears under a truly amazing deluge of violence and sexual horror – the heroine frequently suffers gratuitous rapes variously at the hands of a lesbian teacher turned into tentacular demon, the school undertoad turned demon and then the hero turned into a demon. That is in-between her own perfectly normal sexual dalliances with the hero. In fact, our first introduction to the hero is him masturbating as he peeps into the girl’s locker room – he proves rather virile as a few minutes later he spontaneously ejaculates upon seeing the heroine’s panties during a rhythmic gymnastics exhibition.

While the first half of the film seems happy to settle down to a gratuitous blast of Japanese pathological misogyny, the second half transforms into something different altogether. It offers a vision of a world-shaking apocalypse that is truly extraordinary. Images grow in scale until they almost reach the point of sensory overload. The film is filled with visions of figures hurtling through the skies engaged in vehicle and building-destroying battle, beams of pure power stretching up into the heavens, combatants battling each other on top of tornadoes of rock and water, vast lightning clouds crashing down over the city, a shot that pulls back from the city into orbit around the Earth.

Set against this fantasy of mass destruction is the purity of the innocents trying to stop these forces – the stretch the film makes from awkward high-school sexuality to world-shaking demonic forces is colossal in size. It is these incredible changes of size and scale, something that Akira does equally well, that achieve a grandiose beauty.