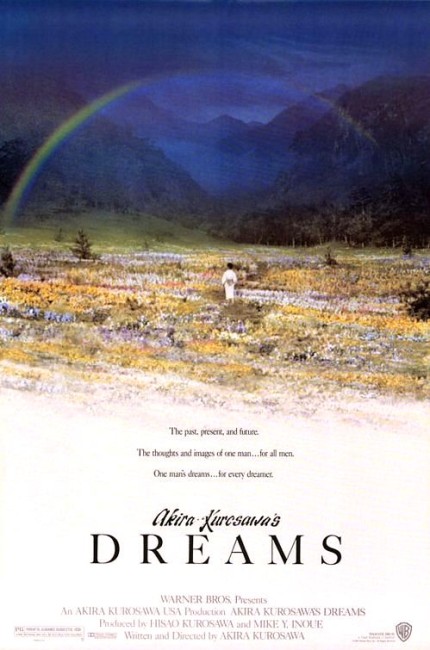 Sunshine Through the Rain:- A young boy’s mother warns him not to stay out in the sun shower lest he see the foxes who always emerge after the rain to bury their dead. He ignores her warning and wanders out into the woods where he sees the strangely garbed and painted foxes emerging in ritual procession. However, when he returns, his mother is forced to bar him from the home and leave him to his fate because the foxes know he was watching and have left a knife so that he may commit hara kari. The Peach Orchard:- The spirits of the trees in a felled peach orchard appear to briefly show a young boy the orchard in bloom again. The Blizzard:- The members of a mountaineering expedition that are lost struggle to find the strength to keep going through a blizzard. A beautiful siren of the snows then appears to tempt them to stay. The Tunnel:- A former army captain is followed by the ghosts of the men he sent to die. Crows:- An artist walks into a landscape of of Van Gogh paintings come to three-dimensional life where he meets the master himself. Mt Fuji in Red:- There is mass panic as seven nuclear reactors surrounding Mt Fuji go off in a chain reaction. The Weeping Demon: On an ash slope, a man encounters demons, the mutated results of a nuclear holocaust, who live in agonising pain and prey upon one another because they have no food. Village of the Windmills:- A man discovers the joys of life in a village without electricity or lighting where the people prefer to live simply.

Akira Kurosawa (1910-98) was one of the great master directors. Kurosawa started as a painter but, unable to earn a living as such, broke into making films. Kurosawa made a handful of films in the immediate post-War period but did not gain recognition until the remarkable international success of the classic Rashomon (1950). He gained his creative height in the 1950s where he wielded the neo-realist influences of the 1940s to classic samurai stories and traditional Japanese acting to create a series of unique masterworks.

Even today, American films still rehash the plots of Akira Kurosawa classics like Rashomon, The Seven Samurai (1954) and Yojimbo (1961) in everywhere from Western to post-holocaust to outer space and gangster settings. Kurosawa’s samurai comedy The Hidden Fortress (1958) is often said to have influenced George Lucas with Star Wars (1977), while his highly stylised action sequences have had extraordinary influence on the entire Hong Kong film industry.

In later years, Kurosawa graduated to vast epics of Japanese historical drama with the likes of Throne of Blood (1957), Kagemusha (1980) and Ran (1985) – films that were written on extraordinary cinematic canvases where Kurosawa arrayed vast armies of extras for his purpose. In the 1980s and 90s, Kurosawa, who had fallen into disfavour in Japan and even attempted suicide at one point, was championed by the likes of George Lucas, Francis Ford Coppola and Steven Spielberg – here Spielberg ‘presents’ the film, George Lucas lends technical aid from his Industrial Light and Magic facility, while Martin Scorsese plays Vincent Van Gogh during the Crows segment.

It is some surprise that Akira Kurosawa never ventured into fantasy cinema. Somehow, the work he did makes one feel he should have. The nearest he came was Rashomon with its unique existential storytelling and the channelling of a ghost as narrator of one of the tales. Kurosawa’s only full-blooded fantasy film was this remarkable venture into the Japanese tradition of the kaidan or ghost story. Surprisingly though, it is one of the most overlooked films in Akira Kurosawa’s canon.

Akira Kurosawa was 80 years old when he made Dreams. He tells eight stories, all of which were purportedly derived from his dreams – the film is titled Akira Kurosawa’s Dreams in some international versions and this is true in the most literal sense. Most of the stories are too brief to be entirely satisfying – they are best seen as vignettes and fragments on a common theme than as separate stories proper. Viewed as a progression of dream images, Dreams is a film of successively overwhelming and beautiful parts.

There are some extraordinary visual moments like in The Tunnel when the ghost soldier turns and points out across an entire valley to a single light, that of his parent’s house lit waiting for his return. Or the Crows segment where Industrial Light and Magic conjure up journeys through perfect three-dimensional recreations of Vincent Van Gogh landscapes where fields, buildings and landscapes have been vibrantly crafted into the wild swashes of bold colour and oil paint that characterise Van Gogh’s work.

The best segments are by far the first two – the samisen dance of the sumptuously dressed ‘dolls’ on the tiered slopes of the peach orchard or the ritual progression of the masked and painted foxes through the forest to oddly atonal music. They are visions far more alien than most science-fiction ever aspires to. The first segment is the most fully realised as a story – Akira Kurosawa creates a fine sense of empathy for the child and the sense of dread chill that comes when his mother abandons him to his fate and gives him the ritual hara kari knife closes in with shattering effect.

The two nuclear diatribes are the slightest, lacking the magic and otherworldliness of the other segments. The only non-fantastic item, the final segment, is a wonderful celebration of life in the face of death and appropriately served as the penultimate coda to the career of the now late Kurosawa who died in 1998.