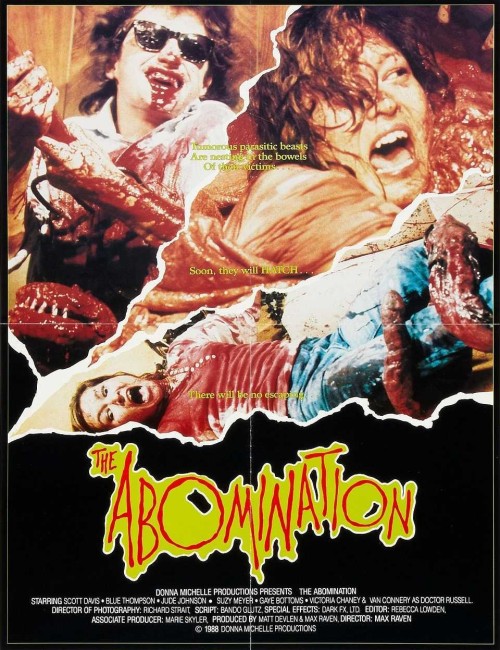 Cody Lee, a mechanic in Zion Hill, Texas, tells his doctor that he is plagued by dreams. His mother Sarah is a follower of the tv evangelist Brother Fogg who announces that he is going to heal her of her tumour. That evening, while watching his show, she coughs the tumour up and then disposes of it in the trash. While Cody is sleeping, the tumour crawls into his room and enters his mouth. Afterwards, Cody is changed. He is driven to start killing people and feeding them to the tumour where it hides in the kitchen cupboards, growing larger and hungrier.

The Abomination is one of those films that gets talked about in circles where people discuss bizarre and forgotten oddities of the VHS era. It was an obscure production made in rural Texas – director Max Raven/Bret McCormick did go on to make other films (see below) but nobody else involved has ever been heard from again.

The film opens on the oddity of a three-minute dream sequence, which basically highlights all of the film’s gore and creature effects, along with everything that even vaguely seems like a dramatic moment they can scrape from anywhere else. The filmmakers should have realised that once you see this – the effects highlights – there is no reason to sit through the dreary drama that fills the rest of the show. In all regards, this is a bad film – the direction is tedious, the photography dull and uninvolving. The performances seem to all be delivered by amateurs – hero Scott Davis has this incredibly flat inflection as he narrates in voiceover.

Certainly, the film has one thing going for it – cheap and unconvincing gore and creature effects. The filmmakers seems oblivious to the shortcoming of these and proceed on with a great deal of enthusiasm. There are the absurdly entertaining scenes where the abomination starts manifesting tentacles and mouths out of washing machines, kitchen cupboards, from under the kitchen sink and even rattling the stovetop. In another scene, Scott Davis leaves a cutting of the tumour in preacher Brother Fogg (Rex Morton)’s toilet bowl whereupon Fogg sits on the toilet and is attacked and dragged in by the creature. There’s an entertaining climax where the abomination erupts from Davis’s stomach and drags off girlfriend Blue Thompson.

What is even more bizarre is the lack of real explanation for anything that is going on. Trying to follow what is going on may well cause brain injury. The abomination starts off as a tumour in Scott Davis’s mother, which Brother Fogg promises to deliver by a tele-exorcism whereupon she vomits it up. It crawls out of the trash and enters Scott Davis’s sleeping mouth after which it appears to possess him and drive him to start killing people. All the deaths he creates somehow cause the tumour to grow in size and become a monster hidden in the kitchen that he has to keep feeding – something you cannot help but feel keeps harkening back to The Little Shop of Horrors (1960), which had notedly just been remade around the same this came out with Little Shop of Horrors (1986).

The Abomination was the first full-length film for Bret McCormick who appears under the pseudonym Max Raven. Under his own name, McCormick has made over a dozen films in the ensuing three decades, mostly in the action genre. His other genre works include Children of Dracula (1994), a documentary about supposed real-life vampires; the monster movie Repligator (1996); the killer robot film Bio-Tech Warrior (1996); and the time travel film Time Tracers (1997); while he has also produced Cyberstalker (1995).